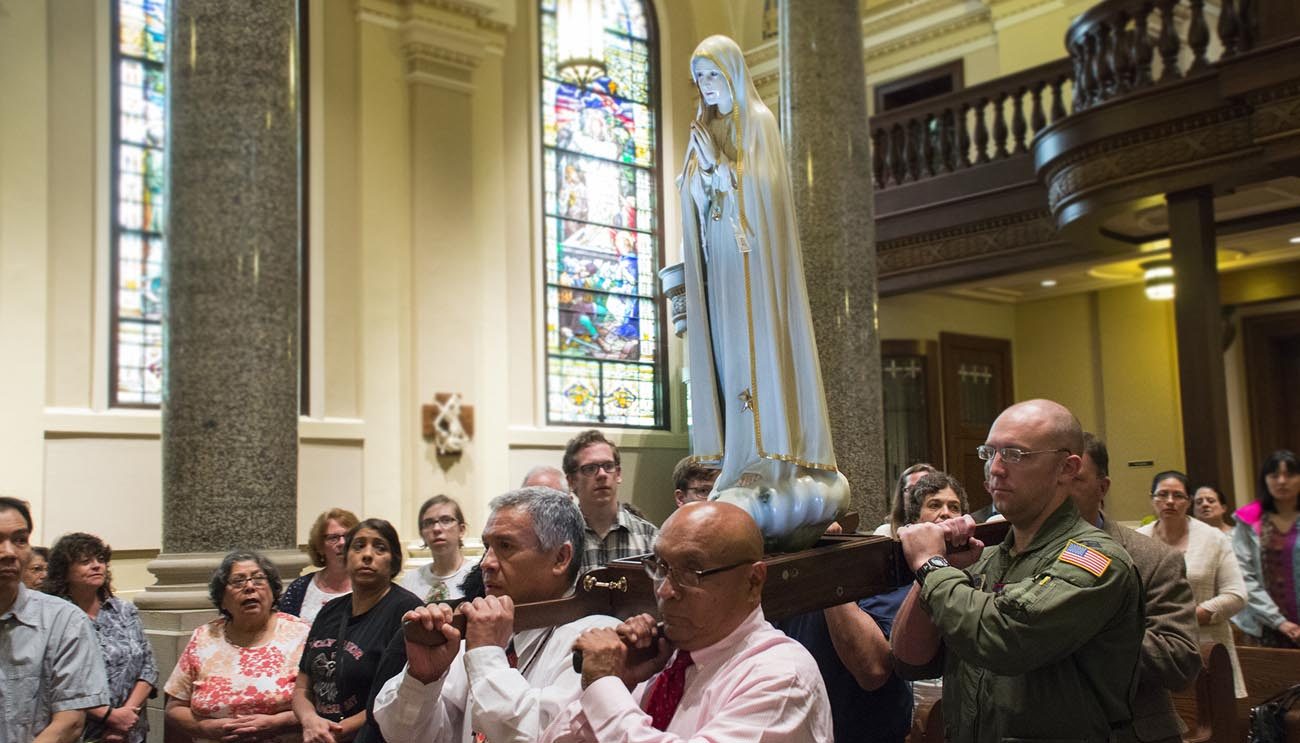 A traveling statue of Our Lady of Fatima is carried during a procession in the Cathedral of the Immaculate Conception in Wichita, Kan., May 10, honoring Mary and recalling her message to three shepherd children in Fatima, Portugal, in 1917. The statue, which is part of the Fatima Centennial U.S. Tour for Peace, is visiting churches west of the Mississippi during 2017. (CNS photo/Christopher Riggs, The Catholic Advance)

MERRILLVILLE, Ind. (CNS) — Carl Marlburg says many Catholics, especially those with a traditional or devotional spirituality, are familiar with the Fatima message of prayer, repentance and the need to turn to God, but in the presence of the traveling statue of Our Lady of Fatima, even they are overcome by a sense of “motherly care.”

“Pretty soon there are tears in their eyes, because they are thinking of a loving mother who is trying to help them stay on course, or get back on course,” said Marlburg, a Munster resident, who is the presenter and custodian of the Fatima statue taken to Marian events around the world.

Marlburg, who has traveled with the statue to dozens of countries since the late ’90s, made the comments ahead of the Fatima centennial in an interview with the Northwest Indiana Catholic, newspaper of the Diocese of Gary.

The Indiana diocese was among those around the world marking the centennial of the first apparition of Our Lady of Fatima to three shepherd children in Portugal.

Pope Francis has granted a plenary indulgence for the Fatima centennial, gained through pilgrimage, public veneration, or private prayer in with the faithful.

On the world stage, the pope traveled to Fatima May 12-13. There standing before the Basilica of Our Lady of the Rosary, he canonized two of the children who saw Mary, Blessed Francisco Marto and Blessed Jacinta Marto.

In the sainthood cause of the third visionary, Carmelite Sister Lucia dos Santos, the diocesan phase has ended. In a February ceremony, the Diocese of Coimbra, Portugal, sealed 50 volumes — 15,000 pages — of evidence and witness testimonies detailing her life. The documents were shipped to the Congregation for Saints’ Causes at the Vatican.

The Marian apparitions began May 13, 1917, when 9-year-old Francisco and 7-year-old Jacinta, along with their 10-year-old cousin Lucia, reported seeing Mary. The apparitions continued once a month until Oct. 13, 1917, and later were declared worthy of belief by the Catholic Church.

“Mary came to remind us that God’s light dwells within us and protects us,” Pope Francis said in Fatima. The hopeful message of Fatima, he said, is that men and women have a mother and like children clinging to her, “we live in the hope that rests on Jesus.”

In Indiana, Marlburg’s wife, Rose Marie, is the president of the Gary diocesan chapter of the Blue Army of Our Lady of Fatima. Since 1984, she has promoted and hosted all-night vigils of prayer and eucharistic adoration.

Through the power of devotional prayer, she said, she has witnessed family members return to the Catholic Church and has often found herself in prayer near the Pilgrim Virgin Statue, or one of the Blue Army’s smaller representations of Mary, “getting a feeling you can’t explain — you felt that (Our Lady) understood our prayers.”

In the Diocese of Baton Rouge, Louisiana, a popular traveling statue of Our Lady of Fatima has prompted many to offer prayers, say the rosary and experience a peace some say fills their home with its presence.

For many years, Michelle Rowell and her husband, Kevin, have helped introduce the statue to many others, including families with young children.

The Rowells told The Catholic Commentator, Baton Rouge’s diocesan newspaper, they feel blessed to honor Mary by helping with the traveling statue. They say Mary has stood by them and continues to be there for them, even during their darkest of days.

“Our son, Allen, died on June 1, 2014,” explained Michelle Rowell, who added that she and her husband were talking to Allen on the phone shortly before he was struck by a vehicle while walking home.

Looking back on that night, Kevin said he now sees many graces.

“When we found him, there was no blood or bruises,” he explained, noting how difficult that would have been to see.

“I immediately turned my thoughts to Mary, and said, ‘Mary, intercede for us,” noted Michelle, who added that when her son breathed his last, it was peaceful.

Father Pereira, who says the connection between the Fatima and Champion shrines is a message of hope, planned to participate in Marian Day, a daylong program of the Green Bay Diocesan Council of Catholic Women and the Champion shrine.

Marian Day at the Shrine was to include an opening prayer and blessing by Father John Broussard, a member of the Congregation of the Priests of Mercy, who is chaplain of the National Shrine of Our Lady of Good Help. Father Pereira and Green Bay Bishop David L. Ricken were scheduled to concelebrate Mass, to be followed by a eucharistic procession with the statue of Fatima.

In Germantown, Pennsylvania, over 200 people gathered at the Miraculous Medal Shrine to commemorate the 100th anniversary of the Fatima apparitions.

“Our Lady of Fatima calls us to a new age of spiritual enlightenment and peacemaking,” Vincentian Father Michael Callaghan said in a special presentation. “Her message is still very much needed today in the 21st century, just as it was in the 20th century. We receive the enlightenment of her apparition and the call to be peacemakers.”

NEXT: Remains of priest exhumed, verified as part of beatification process