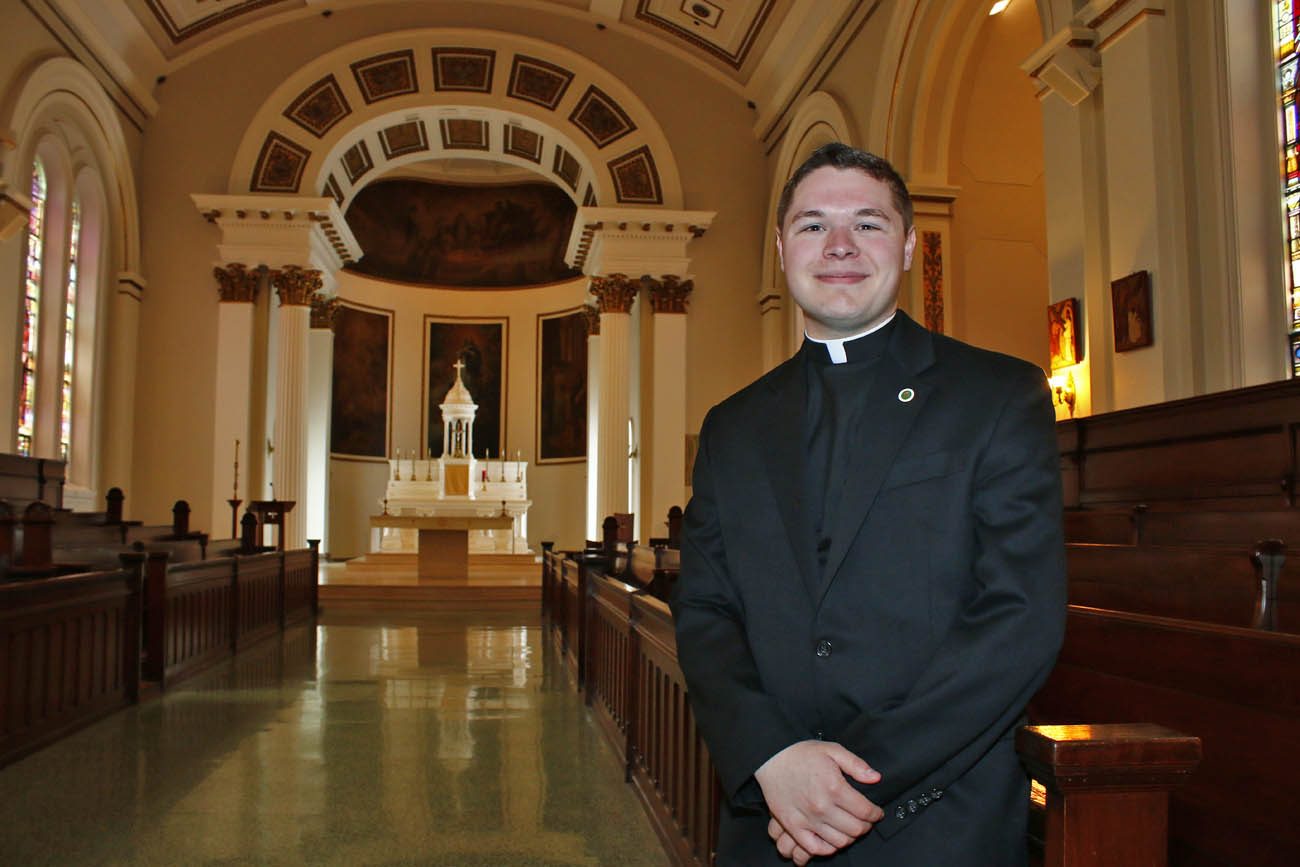 Deacon Matthew Brody stands in Immaculate Conception Chapel at St. Charles Borromeo Seminary, where he is in final preparation for his May 20 ordination as a priest of the Philadelphia Archdiocese. (Sarah Webb). 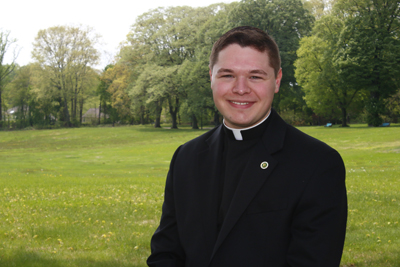 Deacon Matthew Brody, who will be ordained a priest for the Philadelphia Archdiocese May 20, enjoys a pleasant day on the grounds of St. Charles Borromeo Seminary, Wynnewood. (Sarah Webb)

When Deacon Matthew Brody is ordained to the priesthood on May 20 by Archbishop Charles Chaput at the Cathedral Basilica of SS. Peter and Paul, he will have just turned 26, a relatively young age for ordination in this generation. Indeed, at birth the chance of his ever becoming a Roman Catholic priest was rather remote.

He was born in Northeast Philadelphia the son of James and Karen (Krol) Brody and has one sister, Kaitlin. His father is Jewish and his mother at the time of his birth was worshiping at St. Valentine Polish National Catholic Church.

Matt was 3 when the family moved to Mary, Mother of the Redeemer Parish in North Wales, and that very quickly became his spiritual home.

“My pastor growing up was Msgr. Phil Ricci and he was the first to make me think about a vocation,” Deacon Brody recalls. “He was gentle and loving, revered by the people in everything he did, and that appealed to me.”

Matt was still in middle school when Msgr. Ricci first broached the subject, would he consider becoming a priest? His response was maybe, in a passing sort of way. Meanwhile he was deeply involved with the Catholic youth program at MMR and this continued when he was a student at North Penn High School.

When he was entering his junior year at North Penn he was given the opportunity for a year abroad as an exchange student in Germany at no cost and he accepted. Before he left, Msgr. Ricci once more brought up the possibility of the priesthood and urged him to “pray over it and see if God wants you to be a priest,” which he did.

When he made his decision and informed his parents they were “surprised but not surprised,” Deacon Brody said. After the initial shock wore off they were very supportive. His father confided that when he was young he considered becoming a rabbi, and his mother said she too had considered a religious vocation as a nun.

“It was really hard the first years, because of the strict rules. It was a different way of life,” he remembers. “In high school there are some boundaries and also with my parents, but in the seminary there were so many rules it was hard to see where they were coming from.”

On the plus side, “the biggest thing at the seminary is the fraternity of the seminarians,” he said. “They also had the mindset ‘we are going to serve God.’”

After the opening years things did get much better. “I found making friends was important because you have other people with you to share your life with through discussion,” he explained.

For many seminarians sports become a break from their studies. Deacon Brody admits he has little interest in sports; his real passion is music and it has been so from early childhood. “I played the organ and violin for Mass and concerts regularly,” he said. “It’s a great hobby and you can pray through music.”

Another avocation he has is a love of cooking, something not to be easily dismissed in this era of small rectories often without the service of a full-time cook. He also loves to travel, sampling different foods and different lifestyles.

Deacon Brody’s prayer life includes meditation on short passages of the Scriptures, praying novenas and delving into spiritual reading with works ranging from Thomas Merton to Pope Benedict XVI and writers who are similar to himself.

Very soon his seminary year will come to an end and he will be an ordained priest, with all that entails. In his view it boils down to a life of service to the church and to the people.

“If I can do the small things that help people find God, that’s exciting,” he said.

PREVIOUS: God’s call to ministry was always there, but a response took time