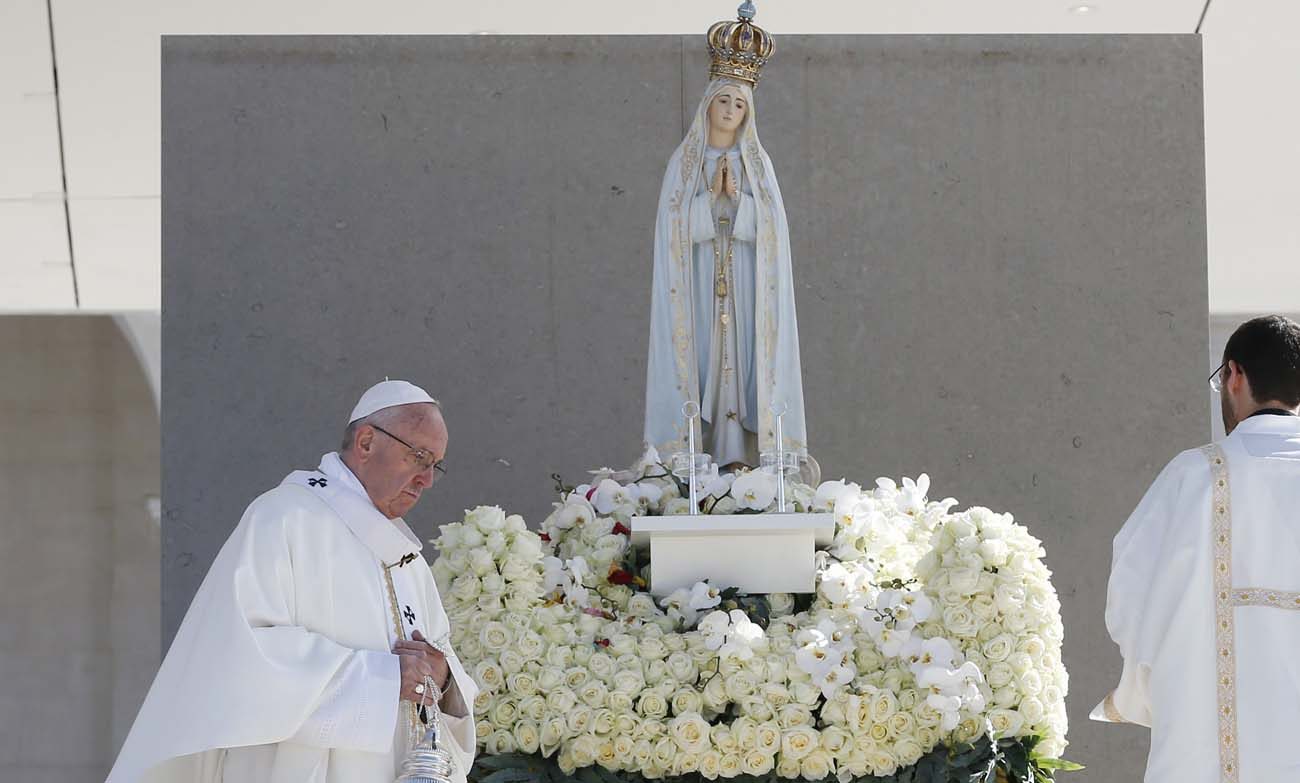 VATICAN CITY (CNS) — Pope Francis is not shy about showing his love for Mary in public and, like many Latin American bishops, he strongly has resisted attempts to dismiss as superstitious or “simple,” in a negative sense, popular devotion to the mother of God.

The pope’s devotion and his respect for those who turn to Mary in their hour of need was on display May 12-13 when he and some 500,000 people gathered at the Shrine of Our Lady of Fatima in Portugal.

Canonizing two of the illiterate shepherd children to whom Mary appeared in 1917, Pope Francis made it clear he sees no need for people to be “sophisticated” in explaining their devotion.

But he also made it clear that, as in any area of faith and spirituality, there is room in their understanding of Mary for people to grow as Catholics and Christians.

Calling himself a pilgrim with the pilgrims, Pope Francis asked “which Mary” did the crowds come to honor? The Mary who is “a teacher of the spiritual life, the first to follow Jesus on the ‘narrow way’ of the cross by giving us an example, or a lady ‘unapproachable’ and impossible to imitate?”

For the pilgrims, he asked, is she “a woman ‘blessed because she believed’ always and everywhere in God’s words or a ‘plaster statue’ from whom we beg favors at little cost?”

Pope Francis said many people would want to have a vision of Mary and to receive direct messages from her like Sts. Francisco and Jacinta Marto and their cousin, Sister Lucia dos Santos, did at Fatima in 1917.

However, he said, “the Virgin Mother did not come here so that we could see her. We will have all eternity for that, provided, of course, that we go to heaven.”

Mary appeared at Fatima, he said, so that people would listen to her pleas that they pray more, do penance and follow Jesus more closely.

Like retired Pope Benedict XVI and St. John Paul II before him, Pope Francis teaches that Marian devotion is an important part of Catholic life, but always because she leads people to a deeper relationship with Christ.

Pope Francis sees a role for priests and bishops in challenging pilgrims to grow in their faith, but not to control how they express it.

In a letter to the Pontifical Commission for Latin America in 2016, Pope Francis said popular piety — including Marian devotion — is “one of the few areas in which the people of God are free from the influence of clericalism.”

“It has been one of the few areas in which the people (including its pastors) and the Holy Spirit have been able to meet without the clericalism that seeks to control and restrain God’s anointing of his own,” the pope wrote. “Let us trust in our people, in their memory and in their ‘sense of smell.’ Let us trust that the Holy Spirit acts in and with our people and that this Spirit is not merely the ‘property’ of the ecclesial hierarchy.”

Pope Francis is convinced that devotion to Mary and other popular expressions of faith are a largely uncultivated seedbed of evangelization. His conviction is so strong that April 1 he formally transferred responsibility for Catholic shrines from the Congregation for Clergy to the Pontifical Council for Promoting the New Evangelization.

“Despite the crisis of faith impacting the modern world, these places still are perceived as sacred spaces where pilgrims go to find moments of rest, silence and contemplation in the midst of a life that is often frenetic,” Pope Francis wrote.

The decision to transfer responsibility for the shrines seems a natural consequence of what Pope Francis wrote in his first exhortation, “The Joy of the Gospel,” which has an entire section on “the evangelizing power of popular piety.”

Popular piety, he wrote in 2013, is a “true expression of the spontaneous missionary activity of the people of God,” inspired and led by the Holy Spirit.

In the exhortation and at Fatima, Pope Francis celebrated the fact that Marian devotion and other forms of popular piety are particularly strong among the poor and humble, the very people with whom Mary identifies in the “Magnificat,” her hymn of praise for how God lifts the lowly, fills the hungry with good things and sends the rich away empty.

Think, the pope wrote, “of the steadfast faith of those mothers tending their sick children who, though perhaps barely familiar with the articles of the creed, cling to a rosary; or of all the hope poured into a candle lighted in a humble home with a prayer for help from Mary, or in the gaze of tender love directed to Christ crucified.”

NEXT: Sydney archbishop on Cardinal Pell: Justice must run its course