Be prophets of joy, not misfortune, pope tells nuns 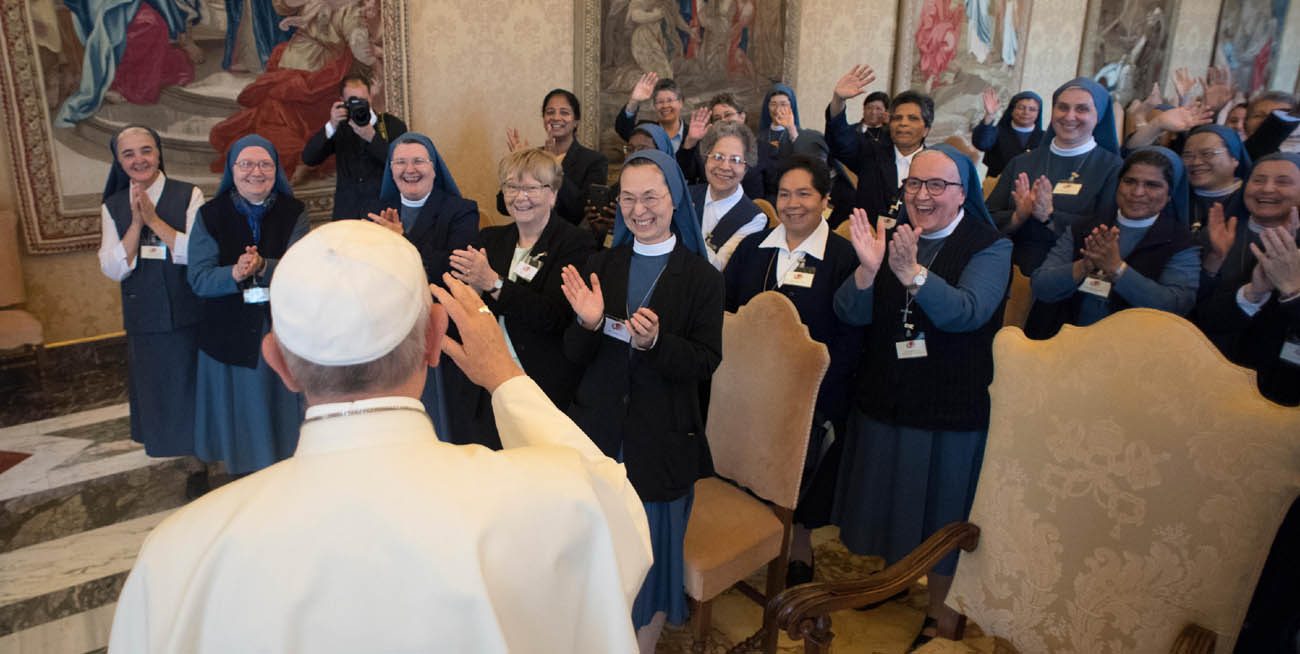 Pope Francis greets participants in the general chapter of the Sister Disciples of the Divine Master during an audience at the Vatican May 22. (CNS photo/L'Osservatore Romano)

VATICAN CITY (CNS) — Consecrated women are called to be prophets of hope and joy in the world and avoid putting on a superficial joy that withers the soul, Pope Francis said.

In order to live out the joy of the Gospel, “it must be a true joy, not a counterfeit joy” that brings about “the cancer of resignation,” the pope told a group from the Sister Disciples of the Divine Master.

“Please, sisters, no resignation. Only joy! The devil will say, ‘We are small, we don’t have many vocations.’ And your face will grow long — down, down, down — and you lose joy,” he said. “No, you cannot live like that; the hope of Jesus is joy.”

Founded in 1924, the Sister Disciples of the Divine Master are part of the nine institutes of consecrated life that form the Pauline Family established by Blessed James Alberione.

The congregation was in Rome April 30-May 28 for their ninth general chapter on the theme “New wine in new wineskins.”

After receiving a warm applause from the sisters, the pope asked their pardon for his late arrival.

In his speech, the pope expressed his hope that the congregation’s general chapter would “bring forth abundant fruit,” particularly the fruit of communion. 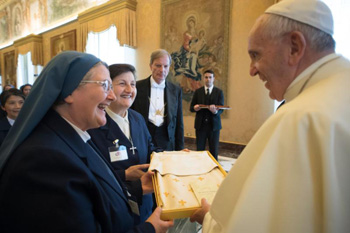 Pope Francis accepts a gift as he greets participants in the general chapter of the Sister Disciples of the Divine Master during an audience at the Vatican May 22. (CNS photo/L’Osservatore Romano)

He asked them to practice “fraternal correction and respect for the weakest sisters” while warning of the dangers of divisions, envy and gossip that “destroy the congregation.”

“For this reason, I invite you to cultivate dialogue and communion with other charisms and to fight self-referentialism in every way,” the pope said. “It is ugly when a consecrated man or woman is self-referential, always looking at him/herself in the mirror. It’s ugly.”

The general chapter, he continued, is also a time to live out “the apostolate of the ear,” that is, to listen to “the sisters as well as men and women of today.” Listening to and sharing with others is necessary “if we want our lives to be fully meaningful for ourselves and the people we meet.”

The vocation to consecrated life, he added, is also an opportunity for sisters to fulfill “the prophecy of joy” in their lives, which is both “a beautiful reality” and “a great challenge for all of us.”

Pope Francis encouraged the sisters to not unite themselves with “the prophets of misfortune” who damage the church or give in to the temptation of “drowsiness” like the apostles in Gethsemane.

“Awaken the world, awaken the future,” he said. “Always smiling; with joy, with hope.”