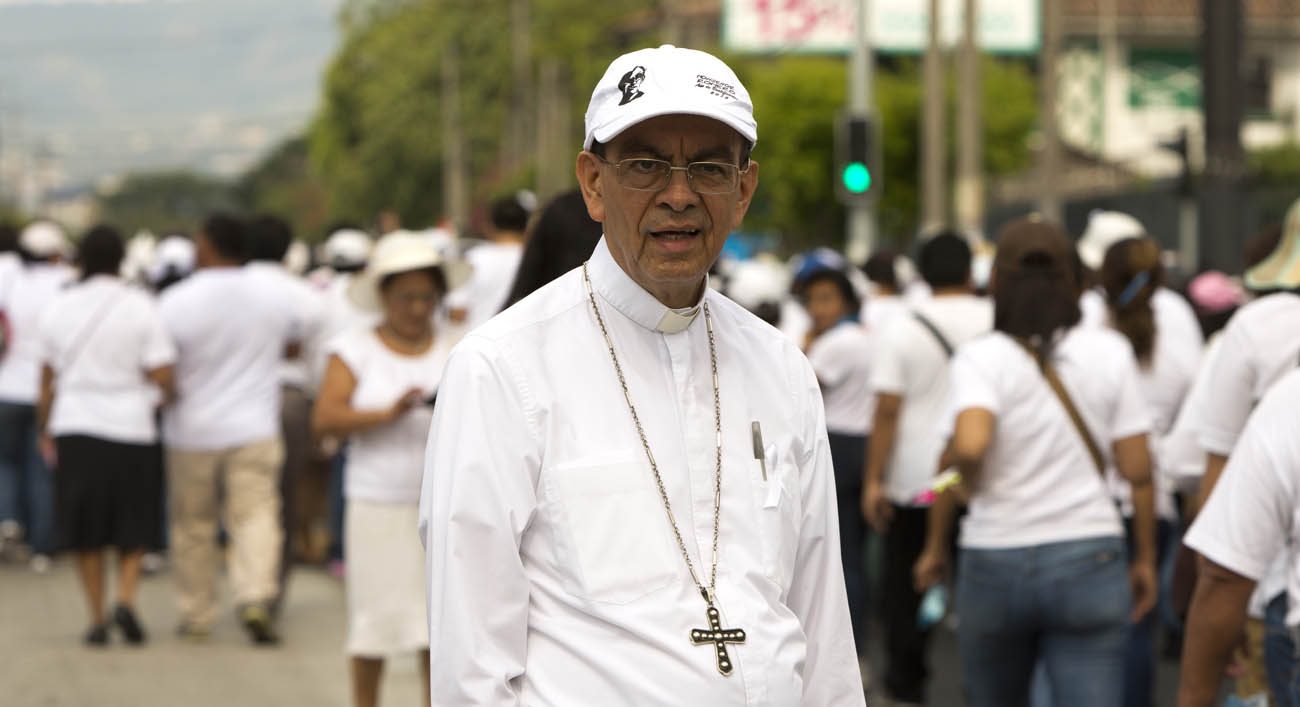 Cardinal-designate Rosa Chavez said he was surprised by a 5 a.m. call May 21 with news of announcement from the Vatican. He said at first thought it was a joke. He expressed his “profound gratitude” to God and Pope Francis, who named him and archbishops from Mali, Spain, Sweden and Laos as the next cardinals.

“It’s a gift from God,” Cardinal-designate Rosa Chavez, auxiliary bishop of San Salvador, said in remarks to the media in El Salvador.

The decision, unique because San Salvador’s archbishop is not a cardinal, comes as the church in Salvador has pushed for sainthood for Blessed Romero, who was shot to death in 1980 at the start of the country’s 12-year civil war as he celebrated Mass in a hospital chapel.

“I dedicate this appointment to Archbishop Romero,” said Cardinal-designate Rosa Chavez. “I believe that he would have been called for this, but he will have to receive it in heaven due to his martyrdom.”

In his diary, which has been published and translated into English, Blessed Romero describes having worked closely with Cardinal-designate Rosa Chavez, whom he refers to as “Father Goyo,” when the cardinal-designate served as rector of the San Jose de la Montafia Seminary in San Salvador.

Archbishop Romero was beatified in 2015, and the Vatican is currently evaluating a miracle attributed to his intercession, which would clear his way for canonization. Cardinal-designate Rosa Chavez said he planned to visit the chapel where Blessed Romero was killed and then his crypt in San Salvador.

“The pope loves Archbishop Romero so much that perhaps he was thinking about this country, the country of Oscar Romero,” when he made the decision, said Cardinal-designate Rosa Chavez.

After he is elevated at a ceremony on June 28, Cardinal-designate Rosa Chavez said he would be “a collaborator for the Holy Father in what he decides.” The cardinal-designate turns 75 Sept. 3 and, as required by canon law, will submit his resignation to the pope.

Cardinal-designate Rosa Chavez’s elevation comes at a key moment in the case of Archbishop Romero’s assassination. On May 18, a Salvadoran judge reopened the investigation into the 1980 killing, which has remained unsolved.

Judge Ricardo Chicas ordered prosecutors to build a case against Alvaro Rafael Saravia, a former military soldier and the main suspect in the case, who was found culpable of the killing in a U.S. civil case and ordered to pay restitution to Archbishop Romero’s family

In El Salvador, Saravia had been shielded from criminal prosecution, but that changed last year when the constitutional court repealed an amnesty law that protected people from facing charges from crimes committed during the civil war.

“It’s incredibly important because this is the case that we’ve been talking about for decades and, until very recently, impunity has been the ironclad rule in El Salvador,” said Matt Eisenbrandt, author of “Assassination of a Saint,” a book published in January about Blessed Romero’s killing and the subsequent investigation.

Eisenbrandt said the case will likely proceed slowly; the Salvadoran government and attorney general’s office must move it forward. Cardinal-designate Rosa Chavez has been one of the voices in the Catholic Church to push for an investigation, he said.

“There has been a strong and unbroken push for Romero’s canonization and there are people within the leadership of the church that have been steadfast in calling for justice at every turn,” said Eisenbrandt.

Members of the church and El Salvador’s government praised Pope Francis’ decision, not just as recognition of Cardinal-designate Rosa Chavez’s work with Archbishop Romero, but also for the role he has played working with poor and his dedication to church agencies in the impoverished country of 6 million.

El Salvador’s Foreign Ministry said Cardinal-designate Rosa Chavez was “fundamental in the process of dialogue and negotiation that allowed us to sign the peace accords in 1992 that put an end to the conflict in our country.”

President Salvador Sanchez said in a message on his Twitter account, “The pope’s announcement fills us with immense gratitude and happiness.”

In one of the most violent countries in the world, due largely to gang violence, Cardinal-designate Rosa Chavez has focused his work on the poor and disenfranchised, said Father Fredy Hernandez, who has worked with the auxiliary bishop at the family pastoral ministry at the archdiocese.

“Bishop Gregorio has vast experience with and knows the reality of families in El Salvador,” he said. “He places the dignity of the human being above ideology.”

The cardinal-designate serves as pastor of the Church of St. Francis in the capital, president of Caritas El Salvador, and is an active representative for El Salvador in the Latin American bishops’ council, known as CELAM, said Father Edwin Henriquez, who directs a Catholic radio station in San Salvador.

“He’s someone who knows well not only the church, but the country of El Salvador,” he said. “Effectively, the pope has looked at our country, looked at the land of Archbishop Romero with mercy, and has gifted us a cardinal.”

NEXT: Be prophets of joy, not misfortune, pope tells nuns