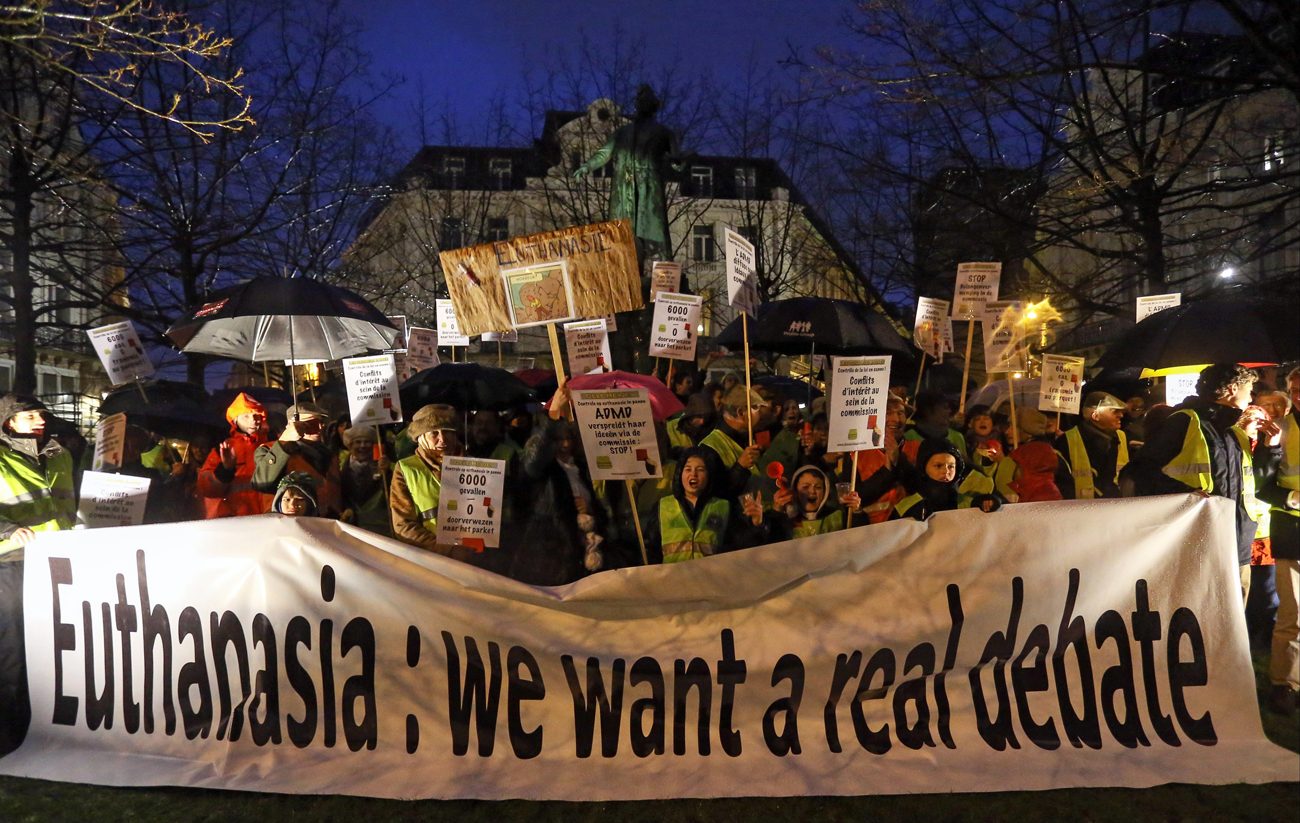 Activists of the collective Yellow Safety Jacket take part in an anti-euthanasia protest Feb. 11, 2014, in Brussels. A group of psychiatric care centers run by a Catholic religious order in Belgium has announced it will permit doctors to undertake the euthanasia of "nonterminal" mentally ill patients on its premises. (CNS photo/Julien Warnand, EPA)

MANCHESTER, England (CNS) — A group of psychiatric care centers run by a Catholic religious order in Belgium has announced it will permit doctors to undertake the euthanasia of “nonterminal” mentally ill patients on its premises.

In a nine-page document, the Brothers of Charity Group stated that it would allow doctors to perform euthanasia in any of its 15 centers, which provide care to more than 5,000 patients a year, subject to carefully stipulated criteria.

Brother Rene Stockman, the superior general, has distanced himself from the decision of the group’s largely lay board of directors, however, and has told Belgian media that the policy was a tragedy.

“We cannot accept that euthanasia is carried out within the walls of our institutions,” said Brother Stockman, a specialist in psychiatric care, in an April 27 interview with De Morgen newspaper in Brussels.

He told the newspaper that he intended to raise the matter with Catholic authorities in Rome and with the Belgian bishops.

Carine Brochier, a Catholic bioethicist from Brussels, told Catholic News Service in a May 3 telephone interview she was certain that political and financial pressure was exerted on the Brothers of Charity Group to allow euthanasia.

The group’s new policy document, which was drafted in March, comes about a year after a court fined the St. Augustine Catholic rest home in Diest, Belgium, for refusing to allow the euthanasia of a lung cancer patient on its premises.

The home was ordered to pay 6,000 euros after it prevented doctors from giving a lethal injection to Mariette Buntjens, 74, who instead was taken by ambulance to her private address to die “in peaceful surroundings.”

“The pro-euthanasia movement is really happy about what is happening,” said Brochier, adding that she believed internal pressures also influenced the decision.

“Rene Stockman is completely the opposite way, but the Brothers of Charity here in Belgium are very, very progressive,” she said.

The new policy document harmonizes the practices of the centers in the group with Belgian law on euthanasia.

It sought to balance the Catholic belief in the inviolability of innocent human life with duty of care under the law and with the demands of patient autonomy.

The group has promised to take requests for death seriously, and it expressed the opinion that “a carefully guided euthanasia can prevent more violent forms of suicide.”

The policy document has acknowledged the difficulties in providing euthanasia to psychiatric patients, noting that Belgian euthanasia law was “primarily written for physical suffering in a terminal situation.”

The suffering of psychiatric patients must therefore be considered hopeless, unbearable and untreatable if a request for euthanasia was to proceed, the policy document says, adding that requests must be voluntarily and repeatedly made by a competent adult for them to be legitimate.

After three doctors have assented to the patient’s request, the euthanasia can go ahead on the Brothers of Charity premises, the document concluded.

In the Flanders region of Belgium, the order is considered to be the most important provider of mental health care services. The order also runs schools, employing about 12,000 staff nationwide.

About 12 psychiatric patients in the care of the Brothers of Charity are believed to have asked for euthanasia over the past year, with two of them being transferred elsewhere to receive the injections to end their lives.

Euthanasia as ‘a form of charity’?

Raf De Rycke, chairman of the board of the Brothers of Charity Group, said in comments reported by De Morgen April 25 that the group was guided by three fundamental values in producing the policy: respect for the patient’s life, the autonomy of the patient and the relationship between the care provider and the patient.

“The protection of life remains fundamental,” said De Rycke. “But we also want to respect the patient’s autonomy, even if he has the desire to live no longer. We do not approve of the (euthanasia) act as such, but respect the demand and see (permitting) it as a form of charity.”

Brochier said she suspected the Belgian bishops were “very embarrassed” by the policy but suggested they shared some of the blame because, she said, they appeared to give up the fight against euthanasia, partly by failing to correct some priests and doctors when they have argued for the procedure while publicly purporting to be Catholic.

“Palliative care is very good in Belgium. We don’t need euthanasia,” she added.

CNS repeatedly tried to reach the Belgian bishops’ conference for comment, without success.

Belgium legalized euthanasia in 2003, a year after the Netherlands became the first country since Nazi Germany to introduce the procedure.

Technically, euthanasia in Belgium remains an offense, with the law protecting doctors from prosecution only if they abide by carefully set criteria.

This initially included limiting euthanasia only to adults who were suffering unbearably and who were able to give their consent but, in 2014, the law was also extended to “emancipated children.”

Despite safeguards, critics have argued the law is interpreted so liberally that euthanasia is available on demand, with doctors also increasingly giving lethal injections to people who are disabled, demented or mentally ill.

NEXT: Egypt is a beacon of hope and refuge, pope says