Egypt is a beacon of hope and refuge, pope says 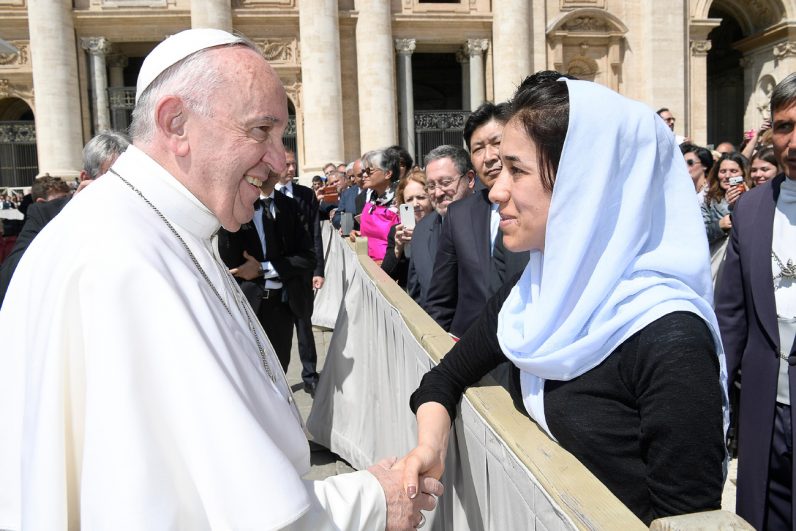 Pope Francis meets Nadia Murad Basee Taha, who escaped from Islamic State slavery in Iraq, during his general audience in St. Peter’s Square at the Vatican May 3. She is now a human rights activist and is a U.N.goodwill ambassador for its office that fights human trafficking. (CNS photo/L’Osservatore Romano, handout)

VATICAN CITY (CNS) — Just as it had been for centuries, Egypt can be a sign of hope for those who long for peace, Pope Francis said.

During his weekly general audience May 3, the pope reflected on his recent visit to Egypt and said that because of its religious and cultural heritage as well as its role in the Middle East, Egypt has the task of promoting a lasting peace that “rests not on the law of force but on the force of law.”

“For us, Egypt has been a sign of hope, refuge and help. When that part of the world suffered famine, Jacob and his sons went there. Then when Jesus was persecuted, he went there,” he said. ” Egypt, for us, is that sign of hope both in history and for today, this brotherhood.”

(Watch a video from the pope’s May 3 audience below:)

The visit to the university, he said, had the twofold purpose of promoting Christian-Muslim dialogue and promoting peace in the world.

Peace between Christians and Muslims in Egypt, he said, is a sign of the country’s identity “as a land of civilization and a land of covenant.”

“For all of humanity, Egypt is synonymous with ancient civilization, treasures of art and of knowledge, of a humanism that has, as an integral part, a religious dimension — the relationship with God,” he said.

Christians in Egypt, the pope continued, play a pivotal role in contributing to peace in the country and are “called to be a leaven of brotherhood,” but that is possible only if Christians themselves are united in Christ.

The historic agreement signed by Pope Francis and Coptic Orthodox Pope Tawadros II ending a longtime disagreement between the churches over the sacrament of baptism “renews the commitment” to peace and is “a strong sign of communion,” he said.

“Together we prayed for the martyrs of the recent attacks that tragically struck that venerable church,” Pope Francis said. “Their blood made fruitful that ecumenical encounter, which included Ecumenical Patriarch Bartholomew of Constantinople, my dear brother.”

“I have seen the beauty of the church in Egypt,” he said, “and I prayed for all Christians in the Middle East so that, guided by their pastors and accompanied by consecrated men and women, they may be salt and light in that land.”