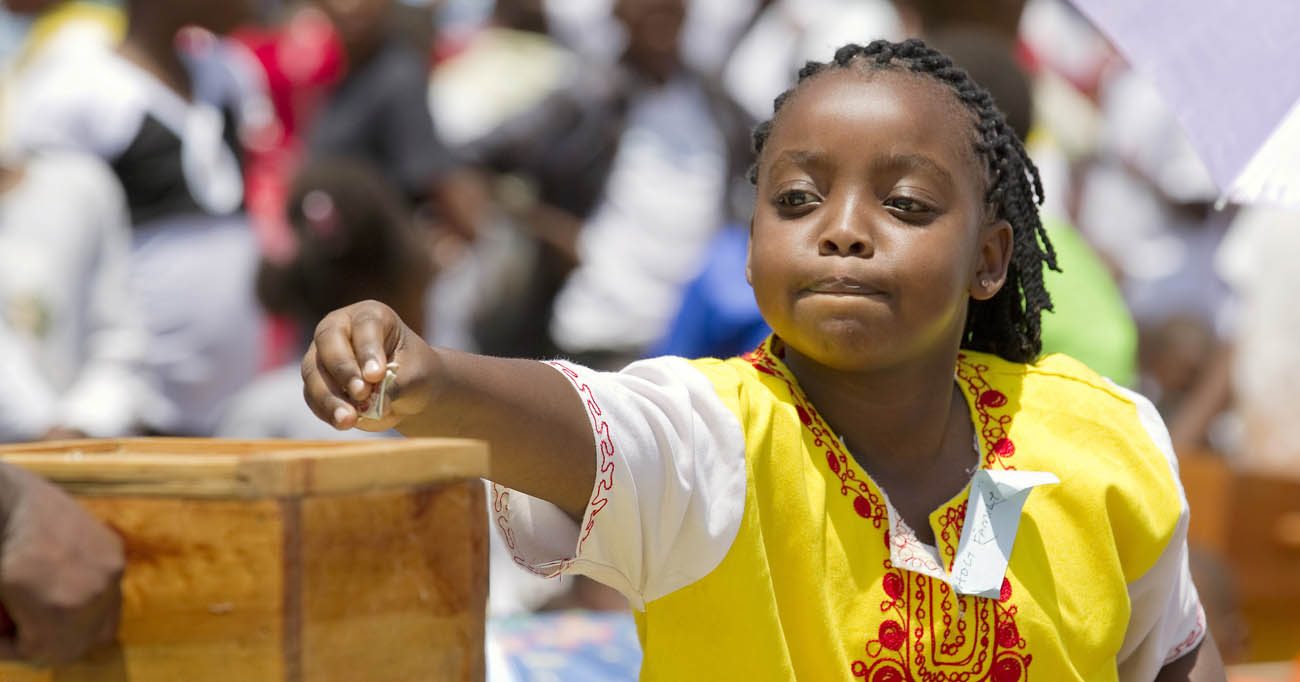 A girl makes an offering during Mass in 2011 marking Missionary Childhood Day in Nairobi, Kenya. Making connections -- including on the child-to-child level -- drives the work of the Pontifical Mission Societies. (CNS photo/Nancy Wiechec)

That is why the United States’ office tapped into the rich digital-media milieu to offer a Facebook Messenger bot to connect with Pope Francis and a MISSIO app for smartphone users to support and get updates on mission projects around the world.

The internet “is the great connector, so we looked at how we could put this amazing technology that connects people instantaneously” together with the great millennia-old human network of the church, Oblate Father Andrew Small, national director of the Pontifical Mission Societies in the United States, told Catholic News Service.

The global network of the church “shares not just an idea or a mission statement, but shares this theology that we are all part of the one body of Christ,” he said. Merging the two — the church and the web — he said, has meant Catholics all over the world can put a face on their brothers and sisters in need, assist them and feel a part of one human family.

Father Small and others talked to CNS May 9 as the Oblate priest led a pilgrimage to the Vatican, Rome and other Italian cities in early May for diocesan directors and supporters of the Pontifical Mission Societies in the United States. They also visited and held talks at the international office at the Vatican.

Pope Francis and his predecessors have underlined how mission work and charity shouldn’t be about “efficiency,” but about passion, said Oblate Father Ryszard Szmydki, secretary-general of the Vatican-based Society for the Propagation of the Faith.

“It’s passion about mission and the responsibility to serve that creates the spirit of communion and community,” he said.

“Every Catholic should think universally and evangelize all over the world,” the missionary priest said.

And that is often the biggest challenge for mission directors: how to get the average Catholic in the pew to feel connected to and invested in “our brothers and sisters in the mission field,” said Father Patrick Posey, director of the Pontifical Mission Societies for the Diocese of Arlington, Virginia.

Father Posey said he delivers homilies and talks on poverty and other forms of deprivation, but people don’t really understand what having no running water, electricity or roads really means until he takes people on a mission trip to the two parishes the Arlington Diocese helps support through its missionary partnership in the Dominican Republic.

Sometimes all it takes is to hand a small child “a dollar store tennis ball and see the joy” on that child’s face to make the visitors from the Arlington Diocese connect with the local townspeople. “They see and remember the same joy they saw on their own child’s face when they played,” he said.

Young adults on a mission trip are asked to reflect together on the day and, he said, many would be in tears, upset by seeing such large families living in one small dirt hut and with so few resources.

But, Father Posey would tell the teens, “you didn’t see their joy” and excitement. “You were crying because you saw what they didn’t have,” and missed seeing the spirit, faith and community they did possess.

What surprises many people, he said, is realizing how much they were helped by the mission communities they had gone to help. “Countless parents,” he said, have told him over the years “how that experience changed my son’s or daughter’s life.”

Father Posey said he avoids campaigns like “dress-down day” fundraisers, in which students make a small donation so they can dress casually on a Friday.

“The problem is, if you ask the kids on Monday what happened,” they only remember the treat of not wearing a uniform, not whom they are helping or why.

In fact, one of the reasons the bygone mission campaign of “save the pagan babies” was so successful and still remembered by older donors today is because it created “a concrete image in people’s minds,” he said.

“People remember the baby they saved, they got a photo, information and Archbishop (Fulton) Sheen was on television” talking about supporting the mission “so people felt they were in collaboration, it was real, there was a face.”

“Now we’re inundated with so much paper and emails it’s hard to put a face on it,” which is why the MISSIO app is meant to reconnect Catholics with real people, real projects and real faces as well as get feedback from the religious running the mission.

Father Szmydki said the Pontifical Mission Societies let every Catholic, even the poorest, contribute in some way “to a common basket” of a universal fund. That way, for example, he said a chapel built in mission territory truly becomes “our chapel” — a home built by and for the one family of God.

NEXT: Go out now, share the Gospel, get messy, pope tells Quebec bishops