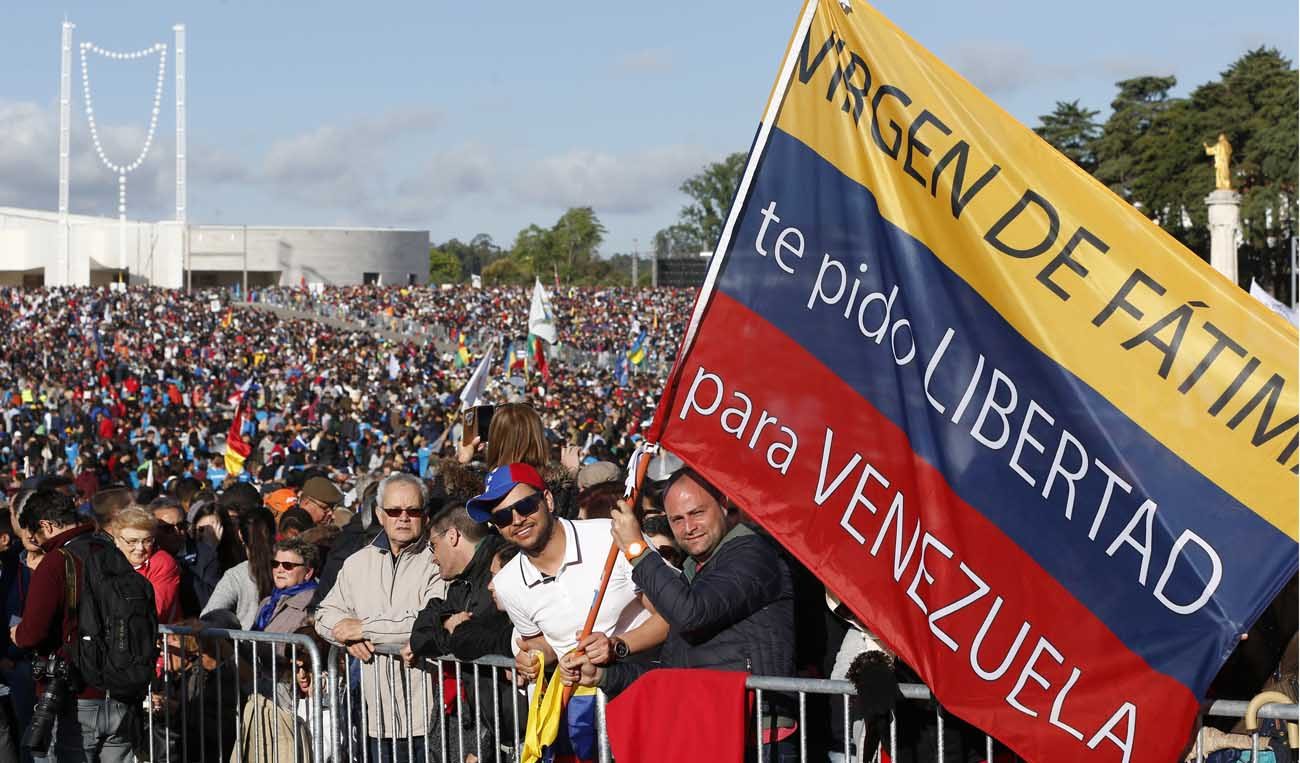 Venezuelan Jose Antonio dos Santos carries the flag of his country that reads "Virgin of Fatima, I ask for freedom for Venezuela," before the canonization Mass of Sts. Francisco and Jacinta Marto celebrated by Pope Francis at the Shrine of Our Lady of Fatima in Portugal May 13. Several Venezuelans camped out all night at the shrine to pray for peace in their country. The Mass marked the 100th anniversary of the Fatima Marian apparitions, which began on May 13, 1917. (CNS photo/Paul Haring)

FATIMA, Portugal (CNS) — Our Lady of Fatima’s message of peace to a country suffering from war and persecution resonates today just as it did a century ago, a Venezuelan pilgrim said.

Jose Antonio dos Santos told Catholic News Service May 13 that he came to Fatima to “ask the Virgin of Fatima the same thing she offered in her message 100 years ago, which was peace for Portugal and freedom for the Portuguese people who were oppressed.”

Amid the hundreds of thousands of pilgrims waving a myriad of banners and flags at the 100th anniversary celebration of the Marian apparitions at Fatima, dos Santos stood tall in the front row, waving a large Venezuelan flag that read: “Virgin de Fatima, te pido libertad para Venezuela” (“Virgin of Fatima, I ask for freedom for Venezuela.”)

Dos Santos, along with his sister Natalia and fellow countrymen Adrian Pita and David Pereira, were camped out in the shrine’s square since the early morning May 12 in the hopes that their message would be brought before the pope and Our Lady of Fatima.

“That is why I stayed all night since yesterday in the shrine,” dos Santos told CNS, “to be close to the altar and convey through this banner the cry of my people.”

A Venezuelan native with Portuguese roots, dos Santos fled the country of his birth nearly 10 years ago and migrated to Barcelona as the repressive situation in Venezuela began under the presidency of Hugo Chavez. His mother and sisters migrated several years after him.

Things have taken a turn for the worse under Chavez’s successor, Nicolas Maduro, with the country descending into chaos after increasing food shortages and economic turmoil.

Although the Supreme Court restored parliament’s authority after local and international outcry, protests against Maduro’s government continued to escalate.

Despite expressing a willingness to negotiate with the opposition, Maduro has been accused of tightening his grip on power and suppressing any threat to his rule.

“The media doesn’t know what is really going on because the press is closed and news isn’t published. What is published is that (Maduro) wants dialogue but that isn’t what’s going on,” dos Santos said.

Supporters of the current Venezuelan government, he told CNS, also have shown open hostility toward the church, most recently during a traditional Holy Wednesday celebration in Caracas April 12.

A mob of Maduro supporters stormed the Mass at the Basilica of St. Teresa after Cardinal Jorge Urosa Savino of Caracas told the faithful “he hoped that there would be an understanding between the opposition and the government,” dos Santos said.

Dos Santos said he came to Fatima not only to witness the canonization of the two young shepherd children but to hopefully convey his message to the pope through his flag.

Pope Francis, he said, “is a Latino pope who has worked in the peripheries and knows the needs of the people.”

The message of Our Lady of Fatima and her promise of peace, dos Santos said, gives him hope that she will accomplish the same in his land.

NEXT: Returning from Fatima, pope says he has doubts about Medjugorje