Returning from Fatima, pope says he has doubts about Medjugorje 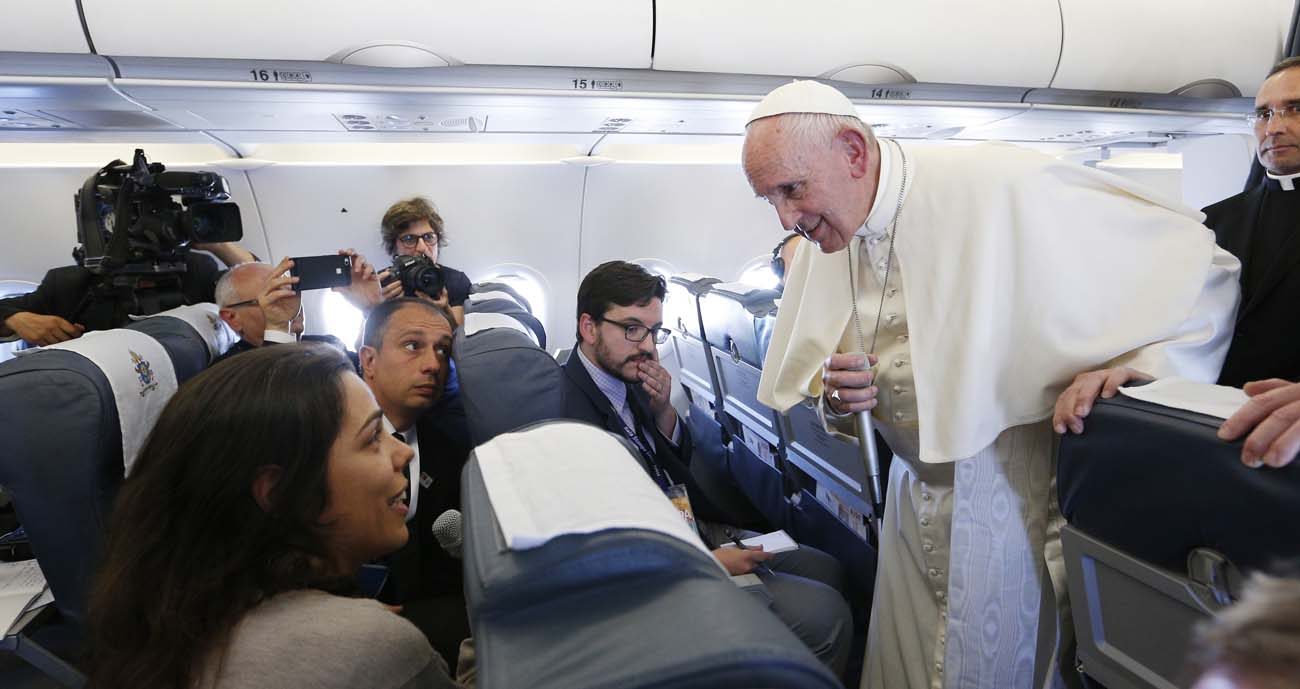 Pope Francis listens to a question from Joana Haderer of LUSA as he speaks with journalists aboard his flight from Portugal to Rome May 13. The pope made a two-day visit to Fatima to commemorate the 100th anniversary of the Marian apparitions and to canonize Sts. Francisco and Jacinta Marto, two of the young seers. (CNS photo/Paul Haring)

ABOARD THE PAPAL FLIGHT FROM PORTUGAL (CNS) — While the investigations into the very first alleged apparitions at Medjugorje in must continue, Pope Francis said he has doubts about claims that Mary continues to appear in the village of Bosnia-Herzegovina.

Asked May 13 about the authenticity of the Marian apparitions, which reportedly began in 1981, the pope referred to the findings of a commission chaired by Cardinal Camillo Ruini, the retired papal vicar of Rome.

“The report has its doubts, but personally, I am a little worse,” the pope told reporters traveling with him from Fatima, Portugal. “I prefer Our Lady as mother, our mother, and not Our Lady as head of the post office who sends a message at a stated time.”

“This isn’t Jesus’ mother,” he said. “And these alleged apparitions don’t have much value. I say this as a personal opinion, but it is clear. Who thinks that Our Lady says, ‘Come, because tomorrow at this time I will give a message to that seer?’ No!”

Three of the six young people who originally claimed to have seen Mary in Medjugorje in June 1981 say she continues to appear to them each day; the other three say Mary appears to them once a year now.

A diocesan commission studied the alleged apparitions in 1982-1984 and again in 1984-1986 with more members; and the then-Yugoslavian bishops’ conference studied them from 1987 to 1990. All three commissions concluded that they could not affirm that a supernatural event was occurring in the town.

Despite his personal doubts, the pope said that the “spiritual and pastoral facts cannot be denied: People go there and convert, people who find God, who change their lives. There isn’t magic there,” he said.

In February, Pope Francis appointed Polish Archbishop Henryk Hoser of Warsaw-Praga to study the pastoral needs of the townspeople and the thousands of pilgrims who flock to Medjugorje each year. He told reporters those people deserve spiritual care and support.

Also during the in-flight news conference, the pope was asked about his meeting with U.S. President Donald Trump, who will visit the Vatican May 24 as part of his first foreign trip as president.

Specifically asked how he would speak to a head of state with clearly opposing views on issues such as immigration, the pope said he would never “make a judgment about a person without listening to him first.”

“There are always doors that aren’t closed. Look for the doors that at least are a little bit open, enter and speak about things held in common and go forward, step by step,” the pope said. “Peace is artisanal; it is made every day. Even friendship among people, mutual knowledge and esteem are made every day,” he said.

Pope Francis also was asked about the resignation of Marie Collins, one of the founding members and the last remaining abuse survivor on the Pontifical Commission for the Protection of Minors.

She left the commission March 1, citing the reluctance of members of the Roman Curia to implement recommendations or cooperate with the commission’s work.

The pope praised Collins’ work on the commission and her continuing role in training bishops to deal with abuse allegations.

As for her reasons for leaving the commission, Pope Francis said, “she is a little bit right because there are so many cases that are delayed.”

However, the pope said the delays in handling cases are due to the need to draft new legislation and to the fact that there are few people capable of handling cases of sexual abuse.

Cardinal Pietro Parolin, Vatican secretary of state, and Cardinal Gerhard Mueller, prefect of the Congregation for the Doctrine of the faith, he added, are looking “for new people.”

Asked about continuing discussions to fully reconcile the traditionalist Society of St. Pius X with the Catholic Church, Pope Francis said he is patient. “I don’t like to rush things.”

He has made overtures to the faithful attached to the society by recognizing the validity of absolution granted by SSPX priests and the validity of marriages they celebrate, but the Vatican still is waiting for the society’s leadership to sign a document affirming certain teachings of the church.

“This isn’t a problem of winners and losers,” the pope said; it is about “brothers who should walk together, looking for ways to take steps forward.”