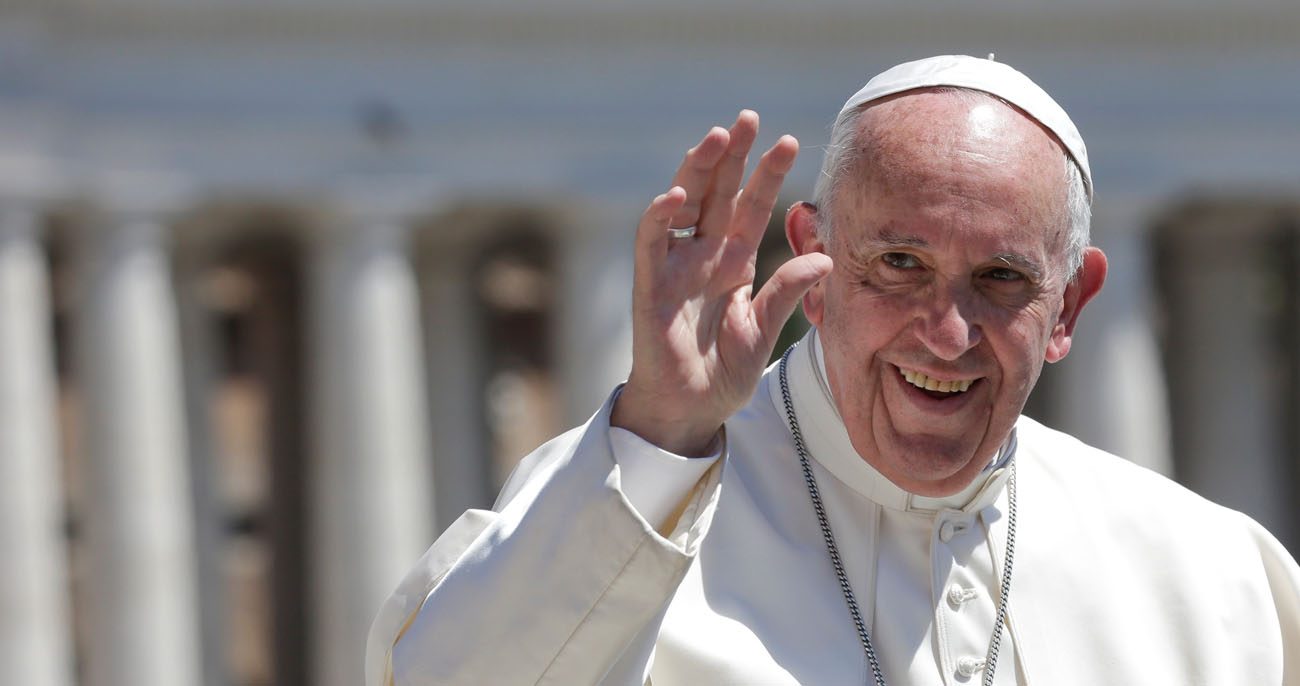 Pope Francis waves as he arrives for his general audience in St. Peter's Square May 17 at the Vatican. (CNS photo/Max Rossi, Reuters)

VATICAN CITY (CNS) — God is right by the side of each person on earth, seeing each individual’s pain and wanting to bring hope and joy, Pope Francis said.

“He calls us by name and tells us, ‘Rise up, stop weeping, because I have come to free you,'” the pope said May 17 at his weekly general audience in St. Peter’s Square.

The pope continued his series of talks on Christian hope by looking at the Gospel of John’s account of St. Mary Magdalene visiting Jesus’ tomb.

She was the first to go to the tomb after his burial, he said, pointing out that the same love and loyalty can be seen today in the many women who head to the cemetery, visiting their dearly departed for years, showing how not even death can break the bonds of love.

In Mary Magdalene’s case, however, she experienced not only the sadness of Christ’s death, but also the discovery that his body had disappeared, the pope said.

Just as she is weeping near the tomb, “God surprises her in the most unexpected way,” the pope said, even though she is stubbornly “blind” to recognizing the two angels and the Risen Christ.

Eventually, he said, “she discovers the most earth-shattering event in human history when she is finally called by name.”

“How beautiful it is to think that the first appearance of the Risen One, according to the Gospels, happened in such a personal way. That there is someone who knows us, who sees our suffering and disappointment,” whose heart breaks “for us and who calls us by name,” he said.

Reading the Gospels, one can see how many people seek God, he said, “but the most extraordinary fact is that God was there in the first place,” long before, watching, worrying and wanting to bring relief.

Each and every person “is a story of love that God has written on this earth,” the pope said. “Each one of us is a story of God’s love” and he patiently waits and forgives each person.

Hearing God call her name revolutionized Mary Magdalene’s life just as it will revolutionize and transform the life of every man and woman, he said.

Christ’s resurrection brings a joy that does not come in dribs and drabs “with an eyedropper,” he said, but as “a waterfall” that will envelop one’s whole life.

The life of a Christian isn’t pervaded by “soft bliss, but by waves that knock everything over,” Pope Francis said. Think about it right now, he told the 15,000 pilgrims gathered in St. Peter’s Square. “With the baggage of disappointments and defeat that each one of us carries in our heart, there is a God near us, calling us by name,” he said.

This God is not “inert,” he doesn’t bend to the whims of the world, and he will not let death, sadness, hatred and the moral destruction of people have the last word.

“Our God,” the pope said, “is a dreamer, who dreams of the transformation of the world and achieved it with the mystery of the resurrection.”

The pope prayed that St. Mary Magdalene would help people listen to Jesus calling their name as they weep and mourn, and that they then venture forth with hearts filled with joy, proclaiming his living presence to others.

Having witnessed the Lord, “is our strength and our hope,” he said.