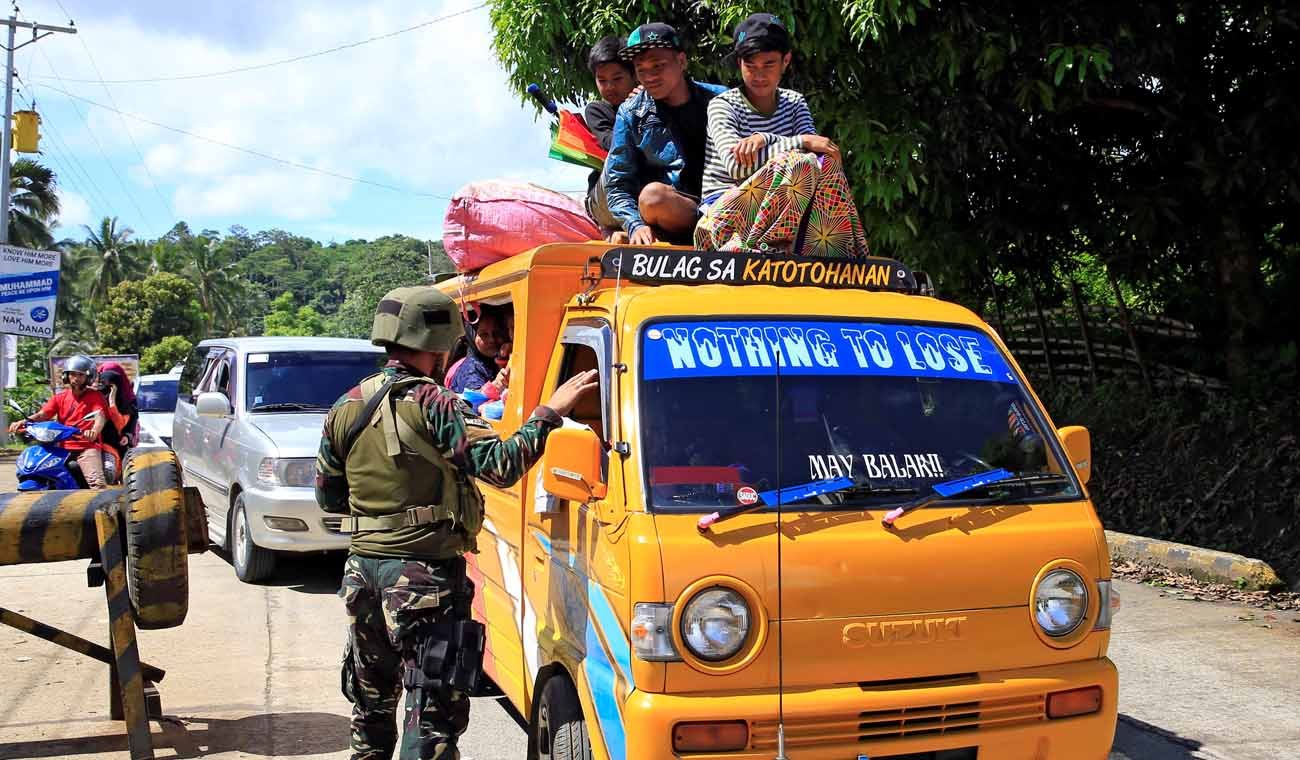 A Philippine government soldier inspects a vehicle May 24 at a checkpoint along a main highway in Lanao del Norte province. Residents started to evacuate the town of Marawi after President Rodrigo Duterte imposed martial law across the entire Muslim-majority region of Mindanao. (CNS photo/Romeo Ranoco, Reuters)

UPDATED – MANILA, Philippines (CNS) — Gunmen claiming to have links with the Islamic State group threatened to kill hostages, including a Catholic priest, who were taken from the southern Philippine city of Marawi May 23.

President Rodrigo Duterte imposed martial law across the entire Muslim-majority region of Mindanao late May 23, but ucanews.com reported that many, including church leaders, characterized the imposition of martial law as an overreaction.

As of early morning May 25, nothing had been heard of the whereabouts of the priest and the prelature’s staff and some churchgoers who were taken captive.

Cardinal Orlando Quevedo of Cotabato appealed to Muslim religious leaders to intercede with the gunmen, who claimed to be Muslims, for the safety of the hostages who were reportedly used as “human shields” when the militants attacked the city.

Archbishop Socrates Villegas, president of the Philippine bishops’ conference, said the terrorists “have threatened to kill the hostages if government forces pitted against them are not recalled.”

“As the government forces ensure that the law is upheld, we beg of them to make the safety of the hostages a primordial consideration,” he added.

Initial reports received by ucanews.com said Father Teresito Suganob, vicar general of the Prelature of Marawi, and several staff of St. Mary’s Cathedral, which was set on fire, were taken hostage. The gunmen also forced their way into the residence of Bishop Edwin de la Pena of Marawi.

Bishop de la Pena confirmed reports that the attackers took Father Suganob, several of the prelature’s staff, and some churchgoers. He said he received a call from “a member of Islamic State” who used his kidnapped secretary’s phone and demanded a “unilateral cease-fire” in exchange for the life of the priest and the other hostages.

“They want a cease-fire and for the military to give them access out of Marawi,” said Bishop de la Pena. “Otherwise they will kill the hostages.”

In a statement on his Facebook page, Manila Cardinal Luis Antonio Tagle told the people of Marawi that no words could express the “shock, confusion, and sadness for what happened.”

Sending solidarity and prayers from the Archdiocese of Manila, the cardinal asked why anyone would hurt their neighbor.

“We weep for you, for all Filipinos, and everyone in the world (whose) lives (are) ruined because of the violence,” he said. “O God, forgive our contempt for life and human dignity.”

Archbishop Villegas said Father Suganob was performing priestly duties at the time of his capture.

“He was not a combatant. He was not bearing arms. He was a threat to none. His capture and that of his companions violates every norm of civilized conflict,” said Archbishop Villegas.

Fighters of the Maute group, which has vowed allegiance to the Islamic State, also burned several buildings, including the cathedral, a Protestant school and the city’s jail.

The bishop said the gunmen used the hostages as “human shields” as fighting continued with security forces May 24.

In Marawi, the military confirmed that five soldiers were killed and 31 others injured in the attack on the city. At least two policemen were also reported killed.

Philippine authorities refuse to release the number of casualties and fatalities as “clearing operations” continued.

Duterte placed all of Mindanao’s 27 provinces and 33 cities, roughly a third of the country, under martial law for a period of 60 days. Mindanao is home to an estimated 20 million people.

“I’ll be harsh,” said Duterte. “I have to do it to preserve the Republic of the Philippines,” he said, even as he assured Filipinos “not to be too scared.”

Ucanews.com reported that religious leaders and civil society groups, however, said there was no need for Duterte to put Mindanao under military rule. Filipinos have been wary of martial law since it was used by Marcos to remain in power for two decades, until his ouster in 1986.

“Putting the whole of Mindanao under martial law is very dangerous and vulnerable to abuse,” said Alih Aiyub, secretary-general of the Ulama Council of the Philippines.

The Muslim religious leader told ucanews.com that “innocent people might be caught in the crossfire or might be arrested illegally by mere suspicion.”

“Fighting terrorism does not need the declaration of martial law, because our existing laws are more than enough to enforce it,” said Aiyub.

Bishop Jose Bagaforo of Kidapawan said the declaration of martial law could have been limited to Marawi City and surrounding areas, “not all of Mindanao.”

Redemptorist Father Amado Picardal, who works with basic ecclesial communities and the bishops’ conference, said declaring martial law across Mindanao while only Marawi was attacked “is either idiotic or an excuse to expand dictatorial control.”