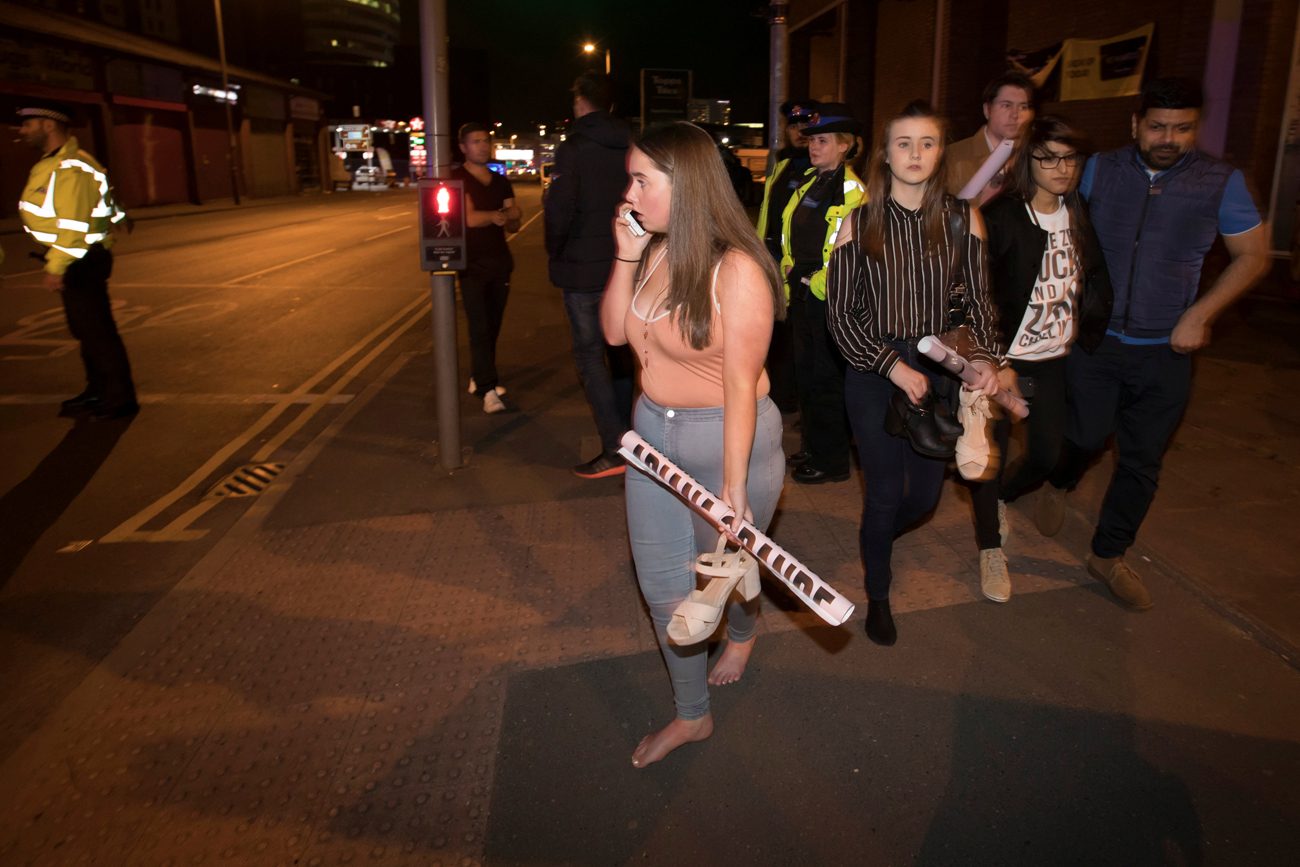 Concertgoers react after fleeing Manchester Arena in England where U.S. singer Ariana Grande had been performing May 22. At least 22 people, including children, were killed and dozens wounded after an explosion at the concert venue. Authorities said it was Britain's deadliest case of terrorism since 2005. (CNS photo/Jon Super, Reuters)

MANCHESTER, England (CNS) — Pope Francis decried the “barbaric attack” on concertgoers in Manchester, adding his voice to Catholic leaders dismayed at what British officials said was the deadliest case of terrorism since 2005.

In a telegram sent to English church officials on Pope Francis’ behalf, Cardinal Pietro Parolin, Vatican secretary of state, said the pope “was deeply saddened to learn of the injury and tragic loss of life” after a suicide bomb killed at least 22 people and injured another 59 at Manchester Arena May 22. Many concertgoers at the Ariana Grande concert were teenagers, young adults and families.

The Islamic State group claimed responsibility for the attack.

The pope “expresses his heartfelt solidarity with all those affected by this senseless act of violence,” the telegram said, as “he commends the generous efforts of the emergency and security personnel and offers the assurance of his prayers for the injured, and for all who have died.”

“Mindful in a particular way of those children and young people who have lost their lives, and of their grieving families, Pope Francis invokes God’s blessings of peace, healing and strength upon the nation.”

In Britain, Cardinal Vincent Nichols of Westminster, president of the Bishops’ Conference of England and Wales, and other Catholic leaders offered prayers for the victims of the attacks and their families.

“My shock and dismay at the horrendous killing of young and innocent people in the Manchester Arena last night is, I know, shared by all people of goodwill,” Cardinal Nichols said in a May 23 statement posted on the Westminster archdiocesan website. “I know, too, that Catholics and many others will be praying earnestly for those who have been killed, for the bereaved and for grieving loved ones.

“We pray in support of all those working so hard in response to this tragedy: the police and security forces, hospital staff, neighbors and friends and for all the people of Manchester. May God, in his mercy, strengthen and sustain us and keep us firmly united in the face of all evil.”

The terrorist attack took place within the Diocese of Salford, which incorporates most of Manchester and much of northwest England.

In a statement the same day, he said: “The citizens of Manchester and the members of the Catholic community are united in condemning the attack on the crowds at the Manchester Arena.

“Such an attack can have no justification. I thank the emergency services for their prompt and speedy response which saved lives,” he continued. “We join in prayer for all those who have died and for the injured and their families and all affected by this tragedy. We must all commit ourselves to working together, in every way, to help the victims and their families and to build and strengthen our community solidarity.”

Bishop Mark Davies of Shrewsbury, whose diocese covers southern parts of Manchester, wrote to his clergy, urging them to pray for the victims and their families.

“Let us also keep in our prayer the police and emergency services, together with all hospital staff and chaplains,” he said in his letter.

The bishop added: “Together with church and religious leaders in Greater Manchester, I ask the prayers of your parishioners for peace and solidarity in all our communities that the hate which inspires such indiscriminate violence may be overcome by that love which faith and prayer inspires in our hearts. I hope the days ahead, overshadowed by this atrocity, will lead us all to such prayer and active charity.”