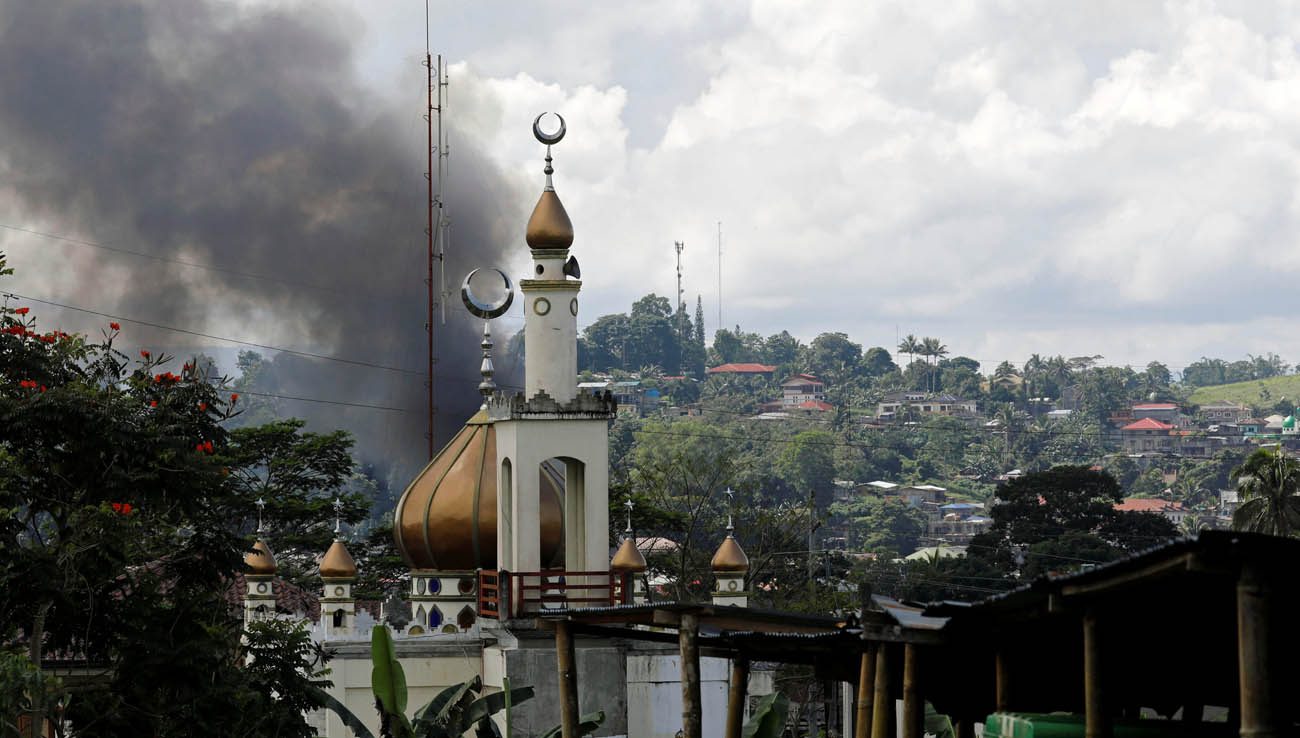 Smoke billows near a mosque in Marawi, Philippines, May 30, 2017. Christian leaders in Philippines have banded together to help rebuild Marawi, a Muslim-majority city in southern Philippines damaged by five months of occupation by terrorists. (CNS photo/Erik De Castro, Reuters)

MANILA, Philippines (CNS) — Catholic bishops in the southern Philippines supported the declaration of martial law in Mindanao following an attempt by a band of gunmen claiming to be Islamic militants to seize a city in the region.

“At present we simply do not have solid and sufficient facts to absolutely reject the declaration of martial law as morally reprehensible,” the bishops’ said in a statement released May 29.

President Rodrigo Duterte declared martial across the southern part of the country after gunmen claiming to have links with the Islamic State group stormed Marawi May 23.

State security forces continued to battle with fighters of the Maute group May 29, resulting in the displacement of thousands of people.

“We are certainly agreed that martial law must be temporary,” the bishops of Mindanao said in the statement signed by Cardinal Orlando Quevedo of Cotabato, ucanews.com reported.

The cardinal said the church leaders “condemn the terrorist acts that have caused the loss of many innocent lives” and the burning of houses, a Catholic cathedral and a Protestant school.

“We condemn the unconscionable kidnapping of teachers and church personnel,” the bishops said.

The gunmen took several hostages including Father Teresito Suganob, vicar of the Prelature of Marawi, some of the prelature’s staff and churchgoers.

The bishops condemned “terrorism in its various forms,” adding that it is an “ideology totally against the tenets of any religion of peace.”

“Terrorism distorts and falsifies the true meaning of any religion. It destroys harmonious relationships among peoples of different faiths,” the bishops’ added.

They noted that many Filipinos see Duterte’s declaration of martial law as “reminiscent of the horrors of a past dictatorship.”

Former dictator Ferdinand Marcos declared martial law in the 1970s, resulting in human rights abuses carried out by the military.

“Martial law is a means of last resort,” the bishops said. “The answers to many questions are speculative. We have many fears.”

They offered their assurance that they will “condemn any abuse and as in the past will condemn it outright if it goes in the way of evil.”

The prelates urged Filipinos to be “vigilant.”

“We exhort everyone to be calm in the face of martial law, to be obedient to the just commands of lawful authority, and not to provoke violent reaction,” said the bishops.

Meanwhile, the Jesuits in the Philippines expressed concern about martial law, describing it as “fraught with danger.”

In a statement, Jesuit Father Antonio Moreno, head of the order’s Philippine province, said martial law in the region “is a source of deep sadness, as well as of real concern and alarm.”

“We have to assert that martial law is fraught with danger, as we in this country have so painfully known,” Father Moreno said.

Martial law is “not a path to be trod lightly, and becomes particularly worrisome in a context where there are already too many questions about the value of life and basic human rights,” he explained.

Father Moreno appealed to Duterte to make martial law “short-lived and calibrated” and avoid “escalating further to other areas.”

Duterte, however, warned that he might expand the coverage of martial law to the entire Philippines if terror threats persist.

The president said he would ignore the Supreme Court of the Philippines and Congress as he enforces martial law despite a provision in the constitution giving both branches of government oversight.

“Until the police and the armed forces say the Philippines is safe, this martial law will continue. I will not listen to others,” Duterte said.

The Philippine Constitution adopted in 1987 imposed limits on martial law to prevent a repeat of the abuses carried out under the Marcos regime, which ended a year earlier.

Duterte has described military rule under Marcos as “very good.”

PREVIOUS: Pope: Get a spiritual EKG to make sure heart pulsates with Holy Spirit

NEXT: One in the Spirit: Catholics, Pentecostals celebrate Pentecost with pope