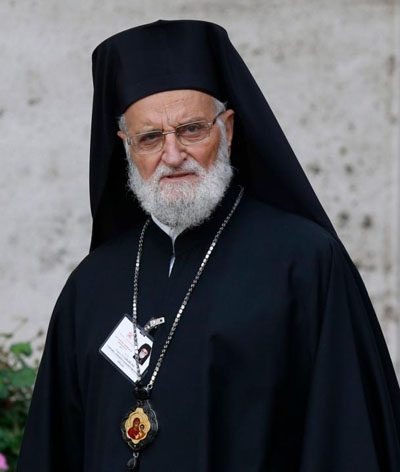 Melkite Catholic Patriarch Gregoire III Laham is seen at the Vatican Oct. 6, 2015. The Vatican announced May 6 that Pope Francis had accepted the resignation of the Melkite Catholic Church leader. (CNS photo/Paul Haring)

VATICAN CITY (CNS) — Two months after bishops of the Melkite Catholic Church declared they had reconciled with each other and found a way to move forward together, the Vatican announced Pope Francis had accepted the resignation of Melkite Patriarch Gregoire III Laham.

In a letter released by the Vatican May 6, Pope Francis said that in February, the 84-year-old Syrian-born patriarch “spontaneously presented me with his renunciation of the patriarchal office, asking me to decide the most favorable moment to accept it.”

“After praying and reflecting attentively, I consider it opportune and necessary for the good of the Greek Melkite Church to accept his resignation today,” said the letter addressed to Patriarch Laham and all the bishops of the Melkite Church.

Pope Francis thanked the patriarch for his service and, especially, for his work to keep the suffering and the needs of the people of Syria in the public eye.

Patriarch Laham had convoked a synod of the Melkite bishops in June 2016, but the meeting was postponed because half the Melkite bishops boycotted the gathering and called for the patriarch’s resignation. One of the main issues of contention was the management of church property, but also leadership styles.

At the time, the patriarch called the bishops’ absence a “case of open rebellion.”

After eight months, the synod met in February at the patriarchate in Rebweh, Lebanon. Afterward, the bishops issued a statement thanking God “for the spirit of reconciliation and renewed commitment to walk together in partnership to restore peace in the church.”

The bishops also scheduled another synod assembly for June.

Between the resignation of Patriarch Laham and the election of a new patriarch by the synod, the church will be administered by the member who has been a bishop the longest, in this case Melkite Archbishop Jean-Clement Jeanbart of Aleppo, Syria, 74.

NEXT: Priests should ease, not add to faithful’s burdens, pope says