Priests should ease, not add to faithful’s burdens, pope says 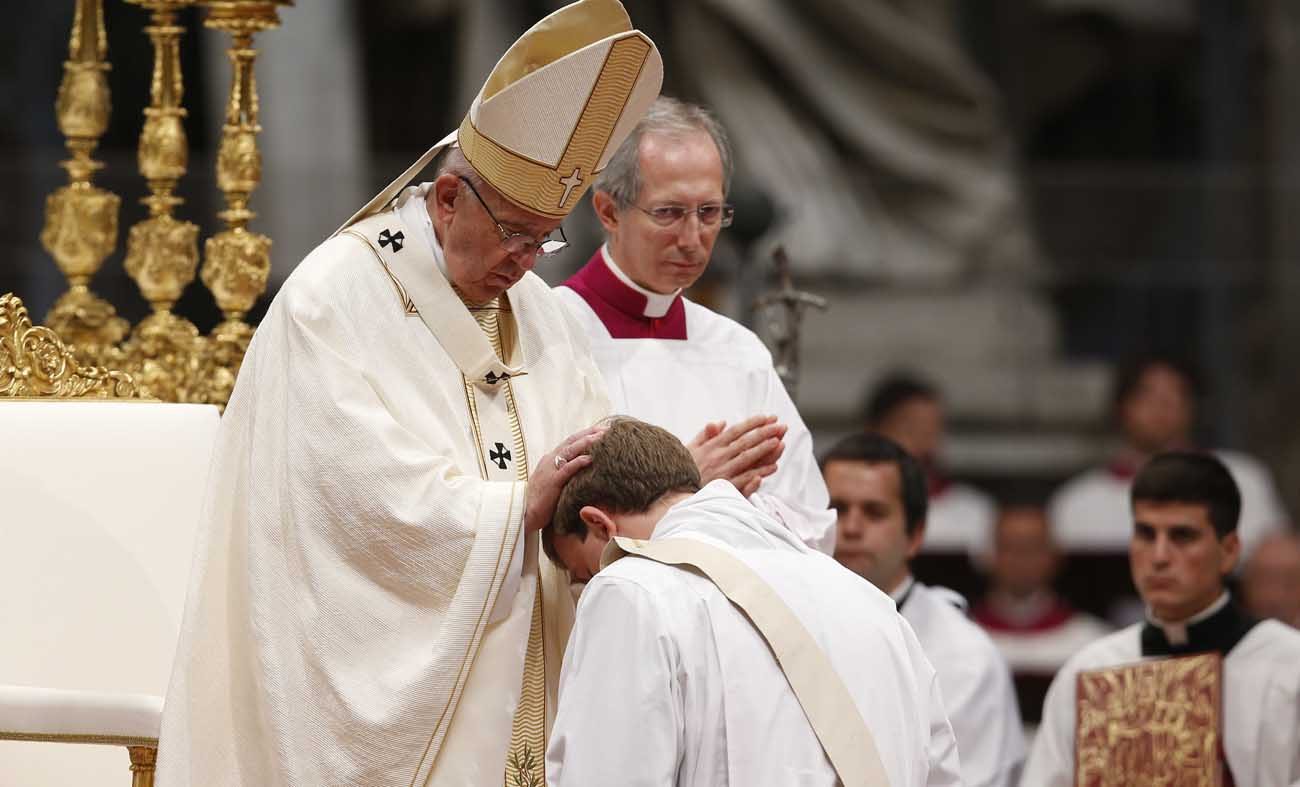 Pope Francis ordains one of 10 new priests for the Diocese of Rome during an ordination Mass in St. Peter's Basilica at the Vatican May 7. (CNS photo/Paul Haring)

VATICAN CITY (CNS) — A priest who does not willingly embrace Christ’s cross and who does not try to lighten the burdens of his people is not worthy of the name, Pope Francis told 10 men he was about to ordain.

“A priest who perhaps has studied a lot of theology and has one, two or three degrees, but has not learned to carry the cross of Christ is useless,” the pope said May 7. “He might be a good academic, a good professor, but not a priest.”

During Mass in St. Peter’s Basilica, Pope Francis ordained six priests for the Diocese of Rome and one each for the Brothers of Our Lady of Mercy, the Peru-based Family of Disciples, the Apostolic Prefecture of Azerbaijan and the Diocese of Nocera Inferiore-Sarno, Italy. The men were between the ages of 26 and 38.

Pope Francis used the prescribed homily for the ordination although, as usual, he added comments.

To the admonition that priests nourish their people with sound doctrine, Pope Francis added a request that they speak simply and clearly.

“Don’t give homilies that are too intellectual and elaborate,” he said. “Speak simply, speak to people’s hearts, and this preaching will be true nourishment.”

Pope Francis asked the new priests to be particularly merciful with penitents in the confessional. “Don’t lay on the shoulders of the faithful burdens that they cannot carry and that you couldn’t either. That is the reason Jesus rebuked the doctors of the law and called them hypocrites.”

“You were chosen by the Lord not to advance your career, but to carry out this service,” the pope told the men. “Please, don’t be ‘lords,'” but pastors who model their service on Jesus, the good shepherd.

Shortly after the Mass, before reciting the “Regina Coeli” prayer at noon, Pope Francis told visitors in St. Peter’s Square that Jesus expressed his authority in service, leading his flock “by giving his life and not asking others to sacrifice theirs.”

“One can trust such a leader, like the sheep listen to the voice of their shepherd, because they know that with him they will be led to good and abundant pastures,” the pope said.

Before giving his blessing to an estimated 25,000 people gathered in the square below, Pope Francis invited four of the newly ordained Rome priests to his window. They joined him in blessing the crowd below.

NEXT: Science and religion join in search for truth