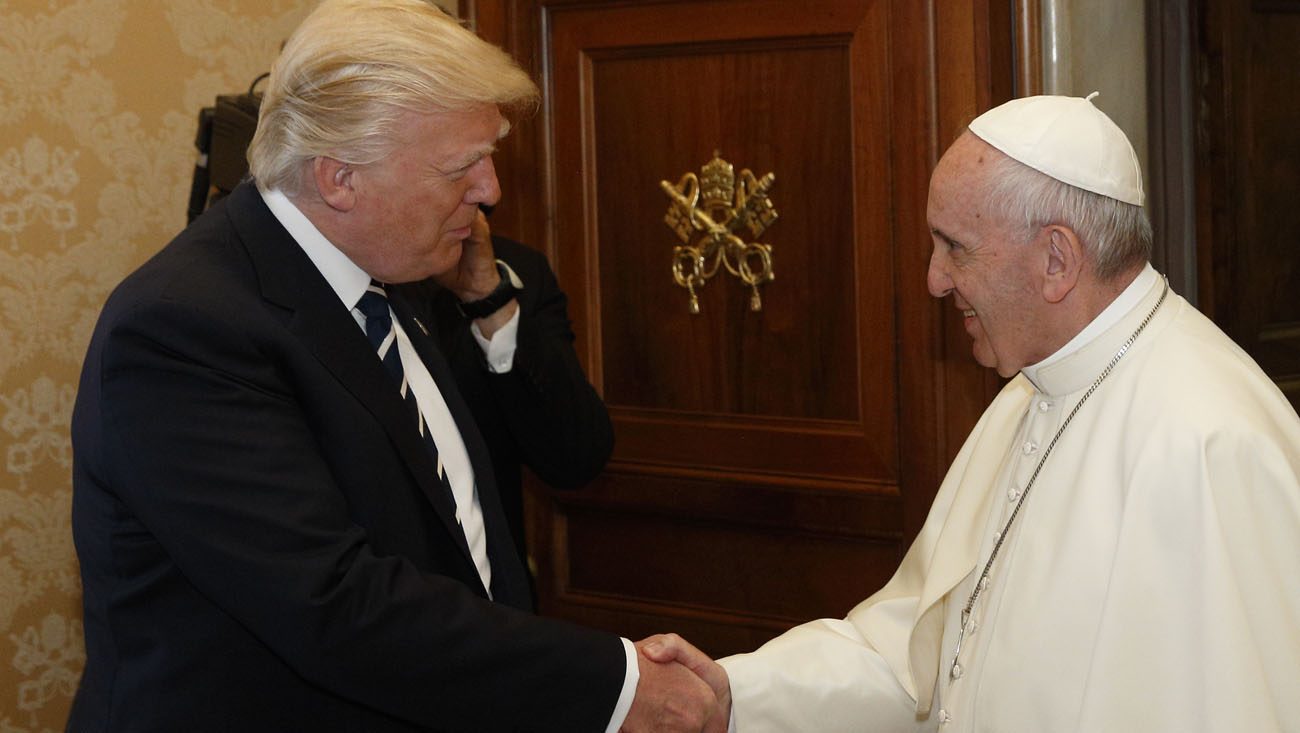 VATICAN CITY (CNS) — Pope Francis and U.S. President Donald Trump spent 30 minutes speaking privately in the library of the Apostolic Palace May 24, and as the president left, he told the pope, “I won’t forget what you said.”

The atmosphere at the beginning was formal and a bit stiff. However, the mood lightened when Pope Francis met the first lady, Melania Trump, and asked if she fed her husband “potica,” a traditional cake in Slovenia, her homeland. There were smiles all around.

Pope Francis gave Trump a split medallion held together by an olive tree, which his interpreter told Trump is “a symbol of peace.”

Speaking in Spanish, the pope told Trump, “I am giving you this because I hope you may be this olive tree to make peace.”

The president responded, “We can use peace.”

Pope Francis also gave the president a copy of his message for World Peace Day 2017 and told him, “I signed it personally for you.” In addition, he gave Trump copies of three of his documents: “The Joy of the Gospel”; “Amoris Laetitia,” on the family; and “Laudato Si,'” on the environment.

Knowing that Pope Francis frequently has quoted the Rev. Martin Luther King Jr., Trump presented Pope Francis with a large gift box containing five of the slain civil rights leader’s books, including a signed copy of “The Strength to Love.”

“I think you will enjoy them,” Trump told the pope. “I hope you do.”

Tillerson later told reporters that climate change did not come up in the meeting with the pope, but that U.S. officials had “a good exchange on the climate change issue” with Cardinal Parolin.

“The cardinal was expressing their view that they think it’s an important issue,” Tillerson said. “I think they were encouraging continued participation in the Paris accord. But we had a good exchange (on) the difficulty of balancing addressing climate change, responses to climate change, and ensuring that you still have a thriving economy and you can still offer people jobs so they can feed their families and have a prosperous economy.” 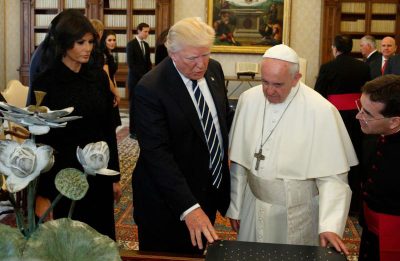 Pope Francis exchanges gifts with U.S. President Donald Trump, accompanied by his wife, Melania, during a private audience at the Vatican May 24. (CNS photo/Paul Haring)

Tillerson also told reporters he did not know what Trump meant when he told the pope, “I won’t forget what you said.”

The Vatican described the president’s meetings with both the pope and with top Vatican diplomats as consisting of “cordial discussions,” with both sides appreciating “the good existing bilateral relations between the Holy See and the United States of America, as well as the joint commitment in favor of life, and freedom of religion and of conscience.”

“It is hoped that there may be serene collaboration between the state and the Catholic Church in the United States, engaged in service to the people in the fields of health care, education and assistance to immigrants,” the Vatican said.

The discussions also included “an exchange of views” on international affairs and on “the promotion of peace in the world through political negotiation and interreligious dialogue, with particular reference to the situation in the Middle East and the protection of Christian communities.”

Because of the pope’s weekly general audience, Pope Francis and Trump met at 8:30 a.m., an unusually early hour for a formal papal meeting. The early hour meant Pope Francis still could greet the thousands of pilgrims and visitors waiting for him in St. Peter’s Square.

Many of those pilgrims, though, had a more difficult than normal time getting into the square. Security measures were tight, with hundreds of state police and military police patrolling the area and conducting more attentive searches of pilgrims’ bags.

Reaching the St. Damasus Courtyard of the Apostolic Palace, where the U.S. flag flew for the morning, Trump was welcomed by Archbishop Georg Ganswein, prefect of the papal household, and a formation of 15 Swiss Guards.

Accompanied by the archbishop up an elevator and down a frescoed hallway, the president passed more Swiss Guards in the Clementine Hall.

Although the president and Pope Francis are known to have serious differences on issues such as immigration, economic policy and climate change, the pope told reporters 11 days before the meeting that he would look first for common ground with the U.S. leader.

“There are always doors that are not closed,” the pope told reporters May 13. “We have to find doors that are at least a little open in order to go in and speak about things we have in common and go forward.”

After leaving the Vatican, the president was driven across Rome for meetings with Italian President Sergio Mattarella and Prime Minister Paolo Gentiloni.

Asked by reporters there how his meeting with the pope went, Trump responded, “Great.”

“He is something,” Trump said. “We had a fantastic meeting.” 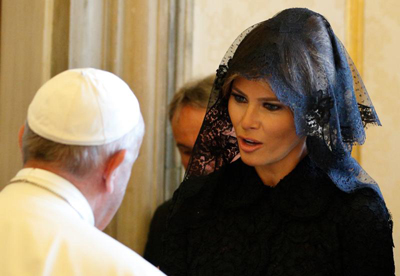 Pope Francis talks with Melania Trump, wife of U.S. President Donald Trump, during a private audience at the Vatican May 24. (CNS photo/Paul Haring)

Meanwhile, the first lady went to the Vatican-owned Bambino Gesu children’s hospital — right next door to the Pontifical North American College, which is where U.S. seminarians in Rome live. Trump’s daughter, Ivanka, went to the Community of Sant’Egidio, a Catholic lay movement, for a meeting on combating human trafficking.

The United States and the Vatican have long partnered on anti-trafficking initiatives, a common effort White House officials had said Trump hoped to discuss with the pope. The White House also pointed to a shared commitment to promote religious freedom around the world and to end religious persecution.

The evening before Trump met the pope, the Vatican newspaper carried two articles on Trump policies. One, echoing the U.S. bishops, praised the Trump administration’s decision to extend by six months the Temporary Protected Status program for Haitian citizens in the United States.

The second article was about the budget plan the Trump White House released May 23. L’Osservatore Romano, the Vatican newspaper, noted that it contained cuts in subsidies “for the poorest segments of the population” and “a drastic — 10 percent — increase for military spending.”

What is more, the newspaper said, “the budget also includes financing for the construction of the wall along the border with Mexico. We are talking about more than $1.6 billion.”

The border wall is an issue where Pope Francis and President Trump have a very clear and public difference of opinion.

In February 2016, shortly after celebrating a Mass in Mexico just yards from the border, Pope Francis was asked by reporters about then-candidate Trump’s promise to build a wall the entire length of the border.

“A person who thinks only of building walls, wherever it may be, and not of building bridges, is not Christian,” the pope said.

Trump, asked by reporters to comment on that, said Mexico was “using the pope as a pawn,” and he said it was “disgraceful” for a religious leader to question someone’s faith.

On the eve of the pope’s meeting with Trump, Jesuit Father Antonio Spadaro, editor of an influential Italian Jesuit journal, noted that the differences between the two were drawing a lot of attention. However, he wrote, “Francis, the pope of bridges, wants to speak with any head of state who asks him to because he knows that in crises” like the world faces today “there are not only absolute ‘good guys’ and absolute ‘bad guys.'”

“The history of the world is not a Hollywood film,” Father Spadaro wrote on his blog May 23.

The pope’s approach, he said, is “to meet the major players in the field in order to reason together and to propose to everyone the greatest good, exercising the soft power that seems to me to be the specific trait of his international policy.”

Contributing to this story were Junno Arocho Esteves and Carol Glatz at the Vatican.

NEXT: Priest says Egypt’s Christians feel they could be martyrs at any time