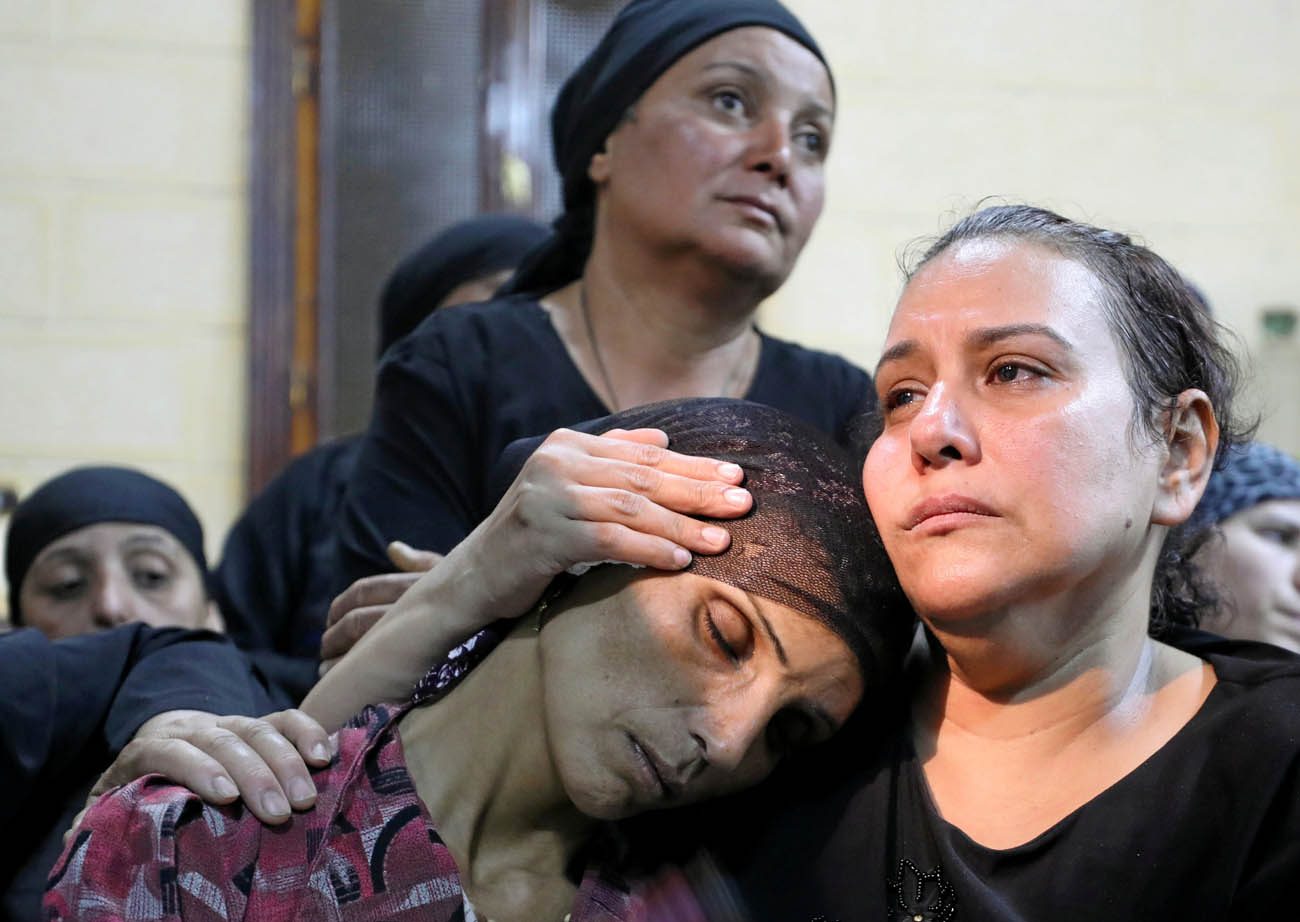 The mother of one of the victims of an attack on a group of Coptic Christians that took place May 26 attends a funeral at the Sacred Family Church in Minya, Egypt, that same day. (CNS photo/Mohamed Abd El Ghany, Reuters)

CAIRO (CNS) — Christians in Egypt “are getting to this idea that we could be a martyr at any moment,” the spokesman for the nation’s Catholic bishops told Catholic News Service.

The spokesman, Father Rafic Greiche, also lamented the number of children killed in an attack on a bus carrying Coptic Orthodox Christians to St. Samuel Monastery in southern Egypt May 26.

At least 26 people, many of them children, were killed when masked assailants attacked the bus. Dozens of others were injured.

“It is too early to say who is behind it, but certainly terrorists, and the security forces are now scanning the area” to find the culprits, Tarek Attia, Interior Ministry official, told Sky News Arabia, an Arabic-language television station, May 26.

He said three cars carrying the masked gunmen had attacked the bus at roughly 10:30 a.m. in the southern governorate of Minya, a traditional stronghold of Egypt’s Christian community, which accounts for a tiny percent of the country’s mostly Sunni Muslim population.

“Mindful in a particular way of those children who have lost their lives, His Holiness commends the souls of the deceased to the mercy of the Almighty. He assures their grieving families and all who have been injured of his ardent prayers, and he pledges his continued intercession for peace and reconciliation throughout the nation,” the telegram said.

The attack marked the latest in a series of deadly attacks on Coptic Christians, whose church was founded by St. Mark the Apostle in the first century, and whose community represents the largest of the Middle East’s Christian minorities.

On April 9, two suicide bombers attacked St. George’s Cathedral in Egypt’s northern city of Tanta and St. Mark’s Cathedral in the coastal city of Alexandria. Those attacks killed and maimed dozens in what was the deadliest attack against Christians in Egypt’s recent history. A nationwide state of emergency has been in place since.

In a widely publicized visit to Egypt soon after the April attacks, Pope Francis addressed the terrorist violence carried out in the name of a fundamentalist reading of Islam. Pope Francis frequently has said there are more Christians being martyred today than during the persecutions of the church in the early centuries of Christianity. And, using the term “ecumenism of blood,” he has noted how Christians divided into churches and denominations are united in mourning for their members killed not because they are Orthodox or Catholic, but simply because they are Christian.

The pope paid tribute to the Coptic Orthodox Church’s modern martyrs, praying before a memorial in Cairo marking the place where 29 people were killed and 31 wounded in December by a suicide bomber. He told Coptic Orthodox Pope Tawadros II, “Your sufferings are also our sufferings.”

After the May 26 attack, the Coptic Orthodox Church released a statement saying, “We extend our condolences to all the affected families and are suffering with the entire country due to this evil and violence.”

“We hope for the necessary procedures to prevent these kinds of attacks, which degrade the image of Egypt and cause so much suffering to Egyptians,” the statement said.

Ashraf Sultan, Egyptian parliament spokesman, told Sky News Arabia, “This is an attack on the entire society and affects us all.”

And Egypt’s top authority on Islam, Sheik Ahmad el-Tayeb, grand imam of al-Azhar University, said that “such attacks can never satisfy a Muslim or a Christian.”

In Washington, Cardinal Daniel N. Di Nardo, president of the U.S. Conference of Catholic Bishops, compared the May attacks with previous attacks, noting that, again, children were murdered as they traveled to church.

“Though our grief is unbearable, our unity grows all the more strong. That unity is the way to peace,” he said, sending prayers and condolences to the Egyptians.

Other church leaders around the world also reacted. The Latin Patriarchate of Jerusalem expressed the condolences of churches in the Holy Land.

Bishop Michael F. Burbidge of Arlington, Virginia, offered prayers and said, “This attack reminds us again of the horrific persecution of our Christian brothers and sisters in the Middle East and their courageous witness to their faith.”

An Egyptian Interior Ministry statement said unknown assailants driving three four-wheel-drive vehicles had attacked by “randomly shooting” the bus carrying the Copts, and that an official count of the final toll was underway.

Local media showed grainy images of bloody bodies strewn on sandy ground, indicating many of the slain had fled the bus trying to escape the assailants’ bullets.

Later, the media showed images of the wounded being taken to hospitals and reported that el-Sissi was calling for an emergency security meeting to address the attack. El-Sissi had instructed authorities to take all necessary measures to attend to the injured and arrest the assailants, the local media reported.

Asked about government assurances that security in the country would be tightened, Father Greiche told CNS: “It is now time for action, not just words.”

NEXT: Prayer, memory, mission create a joy no one can take away, pope says