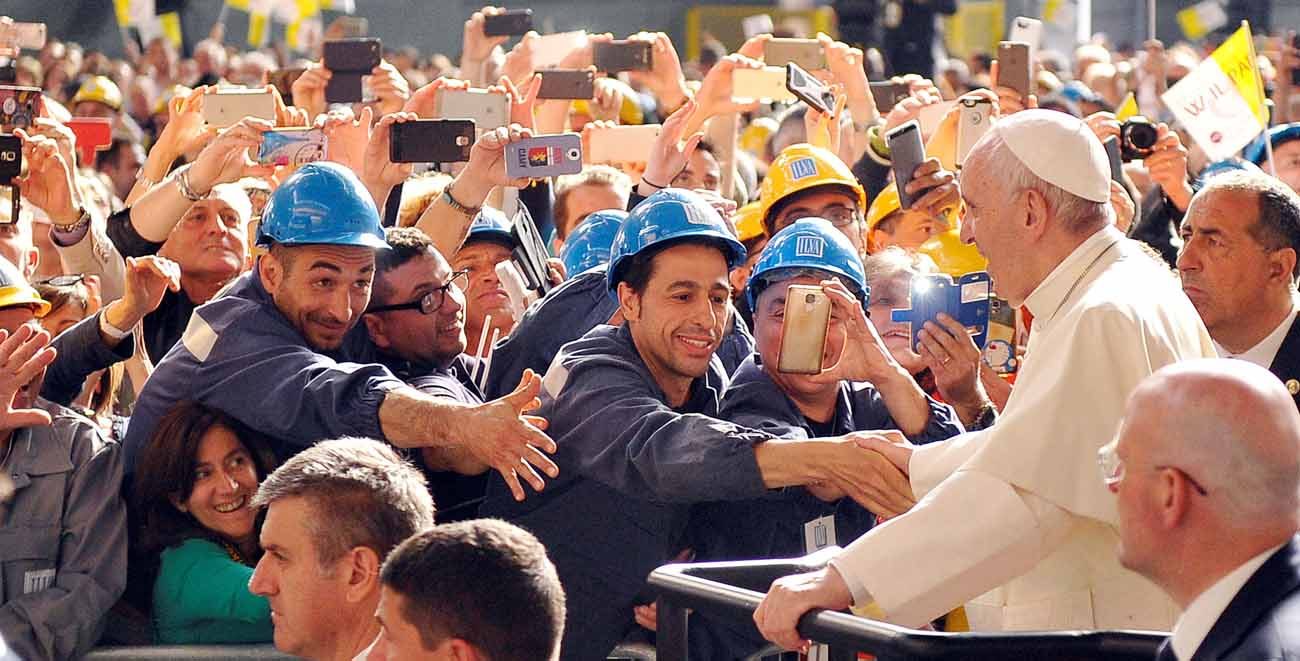 Pope Francis greets workers as he arrives at the ILVA steel plant during his May 27 pastoral visit in Genoa, Italy. (CNS photo/Giorgio Perottino, Reuters)

VATICAN CITY (CNS) — Condemning an economy that encourages speculation more than entrepreneurship, warning priests and religious that they share responsibility for the vocations crisis and telling young people they are right to be puzzled by nations that close their doors to people fleeing persecution, Pope Francis spent a busy day in Genoa.

Besides being packed with pastoral appointments, the pope’s visit to the northern Italian port city May 27 also was emotional. He told workers in a struggling steel plant that it was from the Genoa port that his father and grandparents immigrated to Argentina.

Pope Francis’ daylong visit began with an intense morning of answering questions: first, from workers and business owners gathered at the steel plant; then from priests and religious in the city’s cathedral; and, finally, from young people gathered at a Marian shrine overlooking the city and the sea.

The questions ended when he had lunch — featuring traditional Genovese pesto — with 120 refugees, migrants and homeless people. He also visited a pediatric hospital before celebrating Mass near the port with some 80,000 people, according to local officials.

Starting his visit with the workers, business leaders and unemployed, Pope Francis told them that for those who are able to work, having a job increases dignity, bringing a way to support their family and contribute to society. For that reason, he said, government policies should not be so much about ensuring everyone gets a monthly check of some sort, but that everyone who can work can find a decent job.

“It must be clear that the true objective to reach is not ‘an income for all,’ but ‘a job for all,'” he said.

A good entrepreneur, the pope said, is no stranger to hard work, and he knows his employees because he works with them and alongside them.

Unfortunately today, he said, “an illness of the economy is the progressive transformation of entrepreneurs into speculators.”

A business owner who uses his business for speculation “does not love his company (and) does not love his workers, but sees the company and the workers only as means to a profit.” the pope said. “Firing, closing (or) moving the company creates no problems for him,” because such a person is interested only in the money.

Pope Francis also warned the workers and business leaders against the highly touted idea of “meritocracy” in the workplace and the economy. The idea, he said, takes a positive, “merit,” and “perverts it” by mistaking as merits the “gifts” of talent, education and being born to a family that is not poor.

“Through meritocracy, the new capitalism gives a moral cloak to inequality,” because seeing gifts as merit, it distributes advantages or keeps in places disadvantages accordingly, he said. Under such a system, “the poor person is considered undeserving and, therefore, guilty. And if poverty is the fault of the poor, then the rich are exonerated from doing anything.”

The obligation to do something also was on the pope’s mind when he moved to the cathedral for the meeting with bishops, priests and men and women religious.

He told pastors their day should look like the days Jesus had: time in prayer, but mostly time spent on the road and with a crowd. “This means being close to people and to their problems. He didn’t hide.”

Priests, he said, also must take care to nurture a sense of brotherhood with other priests, praying for them, helping them when they are in trouble, sharing experiences and even having debates about the best way to handle situations they all face.

“We run the risk of creating the image that a priest knows everything and has no need for anyone to tell him anything,” the pope said. “Today kids would say, ‘This is a Google priest or a Wikipedia priest!'”

Disagreements are natural and not something to fear, he said. The late Cardinal Giovanni Canestri of Genoa used to say, “The church is like a river and what is important is being in the river.”

“If you are in the center or more to the right or more to the left, but in the river, this is legitimate variety,” the pope said. “So many times we want the river to narrow only to our side and we condemn the others — that’s not fraternity!”

Asked about the dropping vocation rate, Pope Francis said one can’t ignore the impact on vocations of Catholics having smaller families than in the past. But, also, he said, priests and religious themselves must look at the kind of witness they give young people.

“We have to give a witness that shows we are happy and that we will end our lives happy that Jesus chose us,” he said. When a priest or religious has no joy, “a young person will see them and say, ‘I don’t want to live like that.’ It pushes people away.”

Joy and love were still on his mind when he met young people from the Archdiocese of Genoa who had spent a year as missionaries to their peers, to people on the streets and those in difficulty.

To fulfill Jesus’ command to share the Gospel with others requires learning how to see them with “the eyes of the heart,” listening carefully and loving them, he said.

“Love is being able to take a hand that is dirty and the ability to look in the eyes of those who are in distress and say, ‘For me, you are Jesus.’ This is the beginning of every mission, this love with which I must go out and speak.”

If one cannot love the people one meets on mission, he said, “it’s better to stay home and pray the rosary.”

To be Christians who make a difference, he said, young people must have the same qualities as Genoa native Christopher Columbus and the other explorers: the ability “to look beyond your own nose” and the courage to set off, not always accepting what other people say is “normal,” the pope told them.

Is it normal, he asked, that so many refugees and migrants have such difficult lives when they finally reach a safe country? “Is it normal that the Mediterranean is becoming a cemetery” with refugees drowning?

“Is it normal that in the face of someone’s pain, our attitude is to close the doors?” the pope asked. “If it’s not normal, get involved!”

NEXT: Pope, Trudeau talk about reconciliation with Canada’s indigenous people