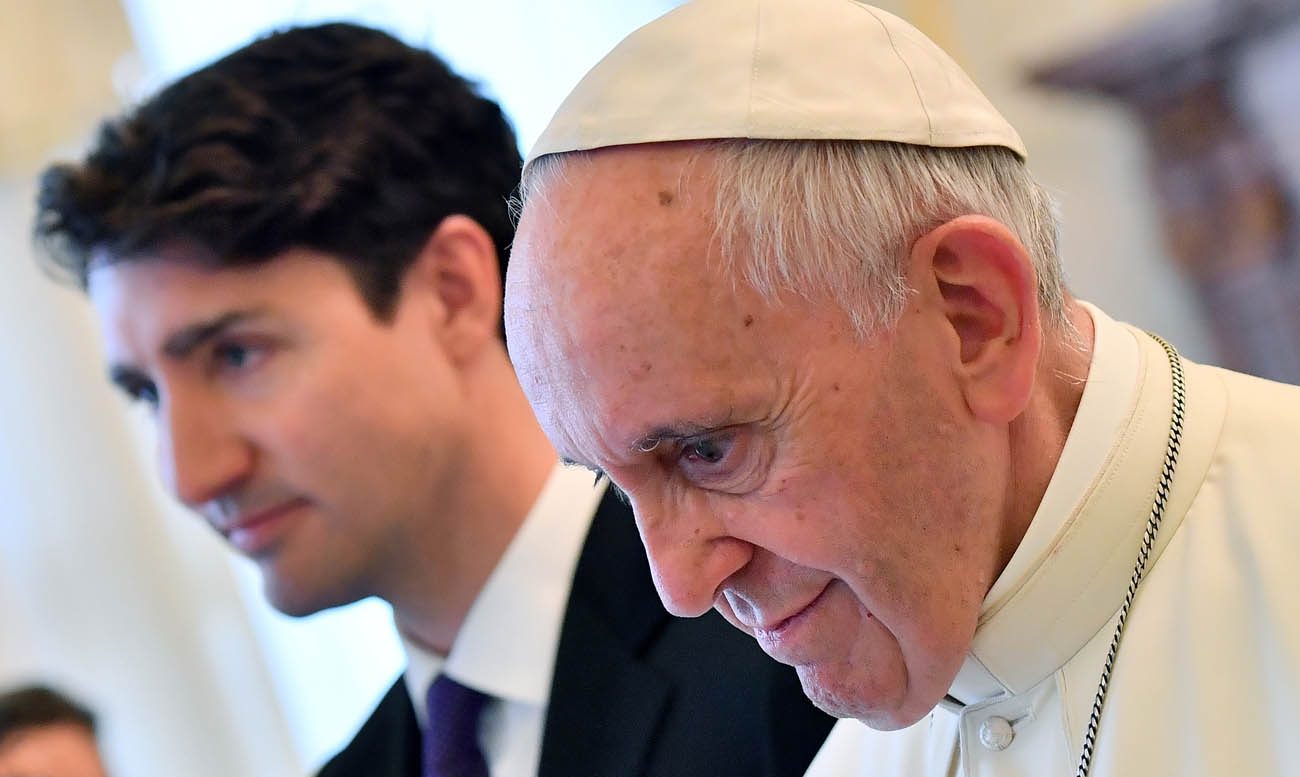 VATICAN CITY (CNS) — Canadian Prime Minister Justin Trudeau said he asked Pope Francis to help Canadians “move forward on a real reconciliation” with the country’s indigenous people “by issuing an apology” on behalf of the Catholic Church for its role in harming their communities.

The prime minister spoke to a handful of reporters in Rome’s Villa Borghese Park May 29 after having had a 36-minute private meeting with Pope Francis at the Vatican.

“He reminded me that his entire life has been dedicated to supporting marginalized people in the world, fighting for them,” the prime minister said, adding the pope said that “he looked forward to working with me and with the Canadian bishops to figure out a path forward together.”

The 2015 report of Canada’s Truth and Reconciliation Commission, which focused on past treatment of the indigenous communities and concrete steps for a future of greater inclusion, included a recommendation that the pope come to Canada to apologize on behalf of the Catholic Church for its participation in the residential schools for indigenous children.

While the idea behind the schools was to promote the greater integration of indigenous communities into modern Canadian life, the schools — many run by Catholic religious orders — led to a situation in which many children were torn from their families, lost their native language and cultures and often suffered abuse.

Trudeau told reporters he invited the pope to go to Canada “in the coming years,” but added no further details about such a trip.

The Vatican meeting, Trudeau said, was an opportunity to have “a deeply personal and wide-ranging, thoughtful conversation with the leader of my own faith.”

For its part, the Vatican issued a statement saying that the prime minister’s meetings with the pope and with Cardinal Pietro Parolin, Vatican secretary of state, included “the themes of integration and reconciliation, as well as religious freedom and current ethical issues.”

Trudeau, who is Catholic, and the bishops of Canada work closely on fighting climate change and on welcoming and assisting refugees, especially from Syria. However, the bishops have sharp differences with the prime minister over a variety of issues related to the sanctity of human life and the family.

In early March Trudeau’s government announced it would “invest” $650 million (US$483 million) over three years to provide abortion and other services in the developing world. The president of the bishops’ conference, Bishop Douglas Crosby of Hamilton, Ontario, reacted by calling the policy “a reprehensible example of Western cultural imperialism.”

The bishops also have been working diligently to promote palliative care and a recognition of the sacredness of life of those who are dying as well as the right of medical personnel to conscientiously object to participating in practices they oppose on religious grounds. The Canadian Supreme Court ruled unanimously in 2015 that people who are “grievously and irremediably ill” have a right to medical assistance in dying.

After the closed-door meeting, Trudeau introduced his wife, Sophie Gregoire, and his delegation to the pope before exchanging gifts with him.

Trudeau gave the pope an edition of the six-volume “Relations des Jesuites de la Nouvelle-France,” a collection of 17th-century reports from Jesuit missionaries in what is now Canada. Trudeau told the Jesuit pope the volumes are an “essential tool for historians” in understanding the early history of the country. He also gave the pope framed samples of a Jesuit’s dictionary of Montagnais Innu, the language of an indigenous community in Canada.

Pope Francis, appreciating the gift, told the prime minister, “it was a custom of the Jesuits” to compile such dictionaries when they began missions in new lands.

The pope gave Trudeau the gold medallion minted for the fourth year of his pontificate (2016-17), which features an “embrace” as “a symbol of forgiveness, joy and mutual acceptance,” according to the Vatican’s description. It also refers to the passage from Matthew 5:7, “Blessed are the merciful, for they will be shown mercy.”

Pope Francis is aware of the current situation in Canada and the concerns of the bishops on all the issues mentioned by Trudeau to the press and in the Vatican communique. From March to May Pope Francis spent hours listening to the bishops, who made their “ad limina” visits to the Vatican in four groups.

While all the bishops of Canada have not formally invited the pope to Canada, during the “ad limina” visits several of the groups explained the situation of Canada’s indigenous peoples, the history of the residential schools and the work of the Truth and Reconciliation Commission.

Some of the bishops said they were told Pope Francis would consider a trip in 2018 or 2019. A final decision would require input from the whole Canadian Conference of Catholic Bishops in dialogue with the Vatican.

NEXT: Pope: Get a spiritual EKG to make sure heart pulsates with Holy Spirit