Restorers unveil frescoed chambers in the Catacombs of St. Domitilla 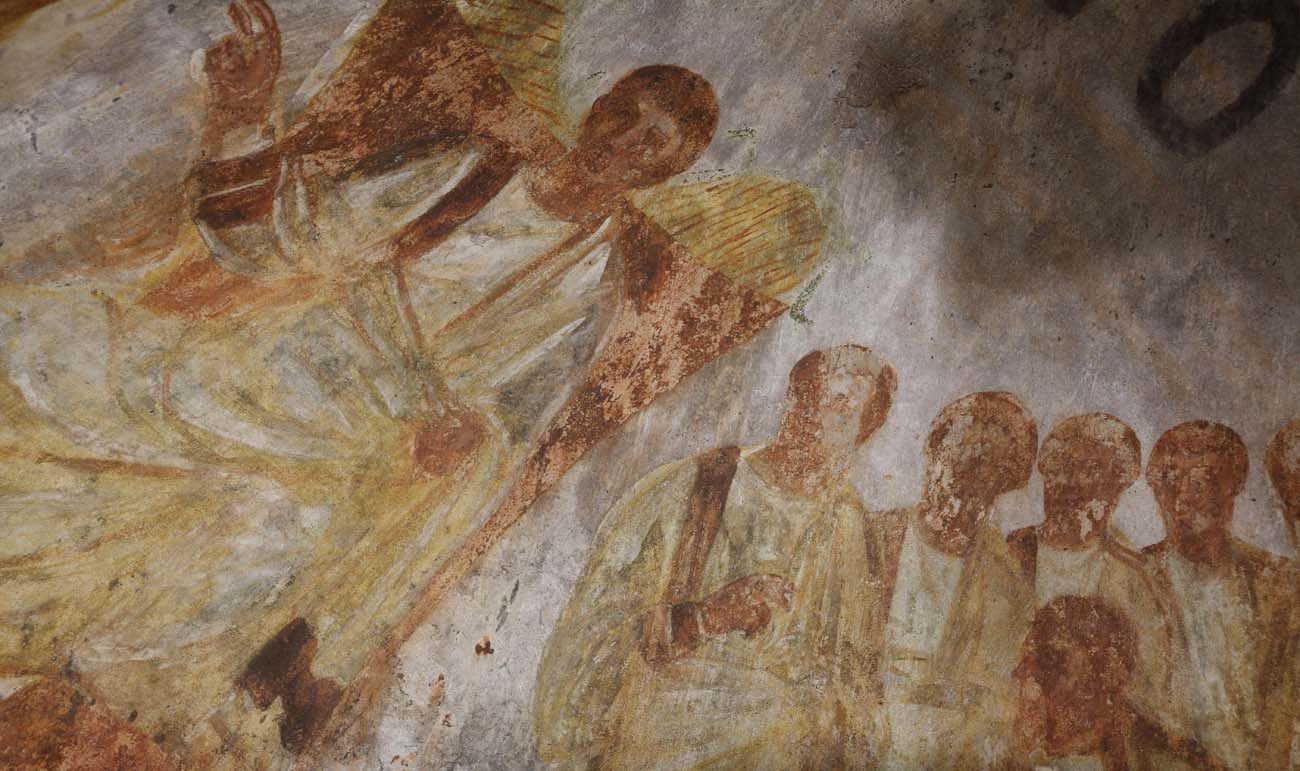 ROME (CNS) — Under a mown hayfield, whose dried-out stalks crunch underfoot, lies the four-level labyrinth of the early Christian Catacombs of St. Domitilla.

Ten miles of tunnels, carved out of soft volcanic tuff rock, snake and fork out in a dizzying number of different directions. Luckily, capsule bulbs of lights strung sparsely overhead work like Hansel and Gretel’s trail of breadcrumbs leading to the sought-after destination: two newly restored burial chambers not yet open to the public.

The sprawling catacomb complex has about 70 burial chambers, or cubicula, but only 10 have been restored, said Barbara Mazzei, who oversaw the restoration of the chambers’ frescoes.

She led a group of reporters to see the finished results May 30. They were unveiled by the Pontifical Commission for Sacred Archaeology, which oversees the upkeep and preservation of more than 100 early Christian catacombs scattered all over Italy.

The Catacombs of St. Domitilla are believed to be the world’s oldest existing Christian cemetery and are among the largest in Italy with a total of some 150,000 burial spots.

The majority are small niches carved into the tunnel walls for poorer Christians; the niches were sealed with a slab of marble or walled up with brick. The round and sumptuously decorated cubicula rooms were built by wealthier families and trade cooperatives, whose members pooled their money for a more dignified resting place.

The newest restoration work was done on the chambers for the city’s bakers, who ran a lucrative state-supported industry of ferrying grain into Rome and making and distributing bread, which was considered something every Roman had a right to with a daily ration. 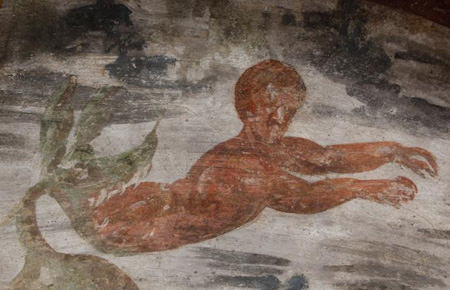 Jonah is spit out of the whale in this fresco seen during the unveiling of two newly restored burial chambers in the Christian catacombs of St. Domitilla in Rome May 30. (CNS photo/Carol Glatz)

Bernardino Bartocci, president of the modern city’s association of bread makers, told Catholic News Service he attended the unveiling as a sign of how bakers continue to be and “have always been united as a group, like a big family.”

The importance and spiritual significance of bread is evident throughout Christian beliefs, he said, and the early Christian bakers proudly displayed the glories of their craft on the ceiling’s frescoes.

Pagan symbolism, such as depictions of the four seasons or a peacock representing the afterlife, together with biblical scenes are integrated without contradiction, Mazzei said.

The unifying motif is salvation and the deliverance from death as is underlined by the varied depictions of Noah in his ark welcoming back the dove, Abraham’s aborted sacrifice of Isaac, Jonah and the whale, and the multiplication of the fishes and loaves, she said.

Despite the seven years of meticulous work to reveal the frescoes’ original splendor, restorers intentionally left the graffiti and autographs penned by visitors from the 1600s and 1700s.

The most prolific selfie-signature seen throughout the complex was “Bosio,” left by Antonio Bosio, a Maltese-born lawyer and scholar who discovered this and many more abandoned catacombs in Rome.

His intense exploratory spirit and stunning discoveries earned him the name, “the Christopher Columbus of the catacombs,” Mazzei said.

He also struck a new path for modern archaeology in which the focus switched from discovering pieces for collectors to understanding what those objects could have meant and disclosed about the past.

He also inadvertently revealed an abundant source of bones to feed the “martyr-mania” raging at the time, she said. He mistakenly believed the dead were all early Christian martyrs, when instead, they were simply devoted faithful who sought to be buried close to the site’s original two martyrs: Sts. Nereus and Achilleus.

While the bakers’ cubicula were to remain closed to the public, a small museum by the catacombs’ main entrance was to open in June to showcase marble busts, ornately sculpted sarcophagi and simple slabs marking the daily lives and legacies of some of the church’s early Christians.

NEXT: Don’t be overly harsh on youth; they have much to give, pope says