Don’t be overly harsh on youth; they have much to give, pope says 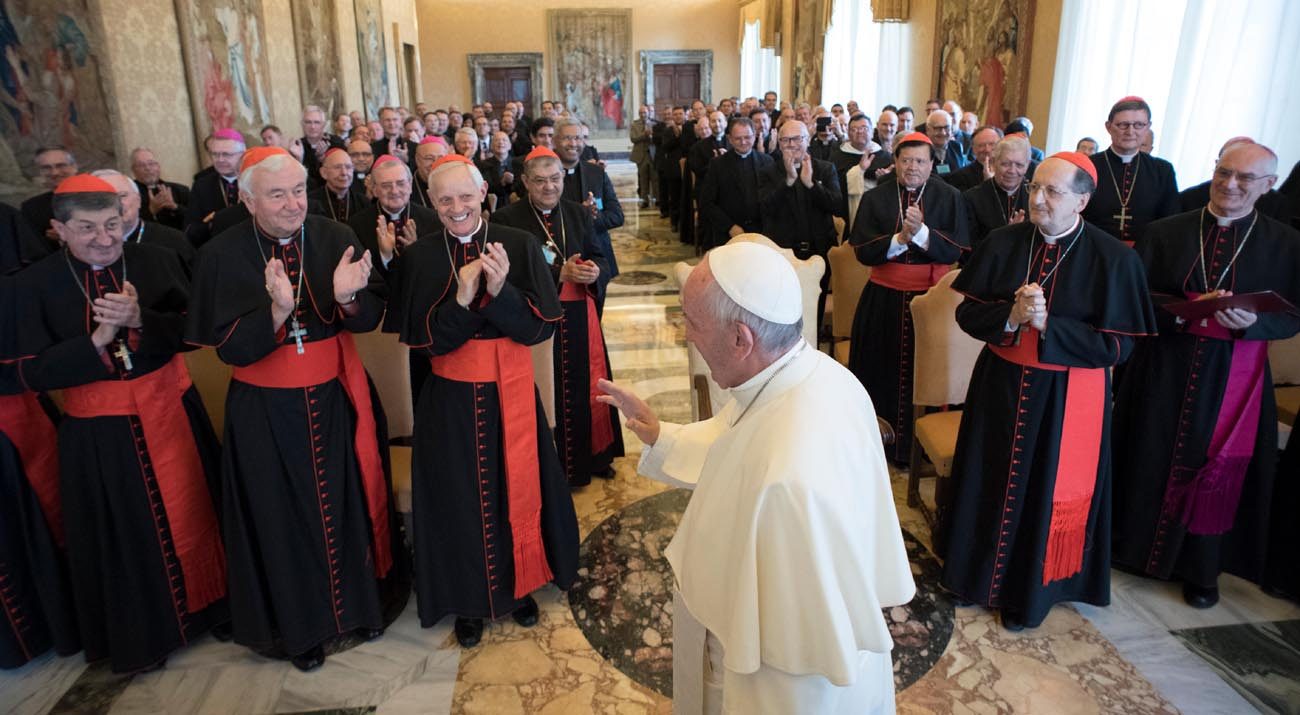 Pope Francis greets participants in the plenary assembly of the Congregation for Clergy during an audience at the Vatican June 1. The cardinals pictured in the first row are: Giuseppe Betori of Florence, Italy; Vincent Nichols of Westminster, England; Donald W. Wuerl of Washington; and Beniamino Stella, prefect of the Congregation for Clergy. (CNS photo/L'Osservatore Romano)

VATICAN CITY (CNS) — Young people often are judged too easily, even though with their limitations they are still a much needed and valuable part of the world, Pope Francis said.

Do not forget how God often chose the smallest, because proclaiming the Gospel “is not based on the greatness of human strength, but rather on the willingness to let oneself be guided by the gift of the Spirit,” he said June 1.

The pope was speaking to members, consultants and others who took part in the Congregation for Clergy’s plenary assembly, which was held at the Vatican May 30-June 1.

The assembly discussed the importance of priests who are the living presence of Jesus, the Good Shepherd, who dwells among his people and possesses a welcoming and compassionate heart, Cardinal Beniamino Stella, congregation prefect, told the pope in his opening remarks.

Young priests in particular need special attention and accompaniment by their bishops, fellow priests and church communities because “the risk of spreading oneself too thin, exhaustion or seeking refuge in spiritual worldliness is high” in today’s culture of indifference, individualism and secularism, the cardinal said.

Pope Francis said he wanted to tell the world’s young priests, “You have been chosen; you are dear to the Lord!”

And, he said, God always watches over his children and will guide their steps.

“In his eyes, you are important and he has faith that you will be up to the mission he has called you to,” Pope Francis continued, adding that bishops and priests must also emphasize the same message with young clergy.

Young priests are not just replacements “to fill empty posts,” the pope said. “Never fill these posts with people who have not been called by the Lord. Don’t take them from just anywhere.”

Always examine the “authenticity” of each individual’s vocation, he said, making sure a young man isn’t just “seeking refuge.”

“Receiving priests solely because we need them, my dear brother bishops, this is an encumbrance for the church,” he said.

The pope also appealed to bishops to never let their priests feel cut off from them. When a bishop learns a priest wants to talk or meet, but the bishop’s schedule is overbooked, he should call that day, that night or, at most, early the next day to talk and see how urgent the matter is, the pope said.

“The important thing is that that priest feels he has a father, a father who is near,” he said. “You cannot govern a diocese without closeness, you cannot help a priest grow and be holy without the paternal closeness of the bishop.”

Keeping fresh the enthusiasm, joy and proper kind of fear in young priests is critical for ensuring they do not become paralyzed by problems and worry, Pope Francis said, and for helping prevent their falling into the temptation of “rigidity,” giving up or getting lost.

“One has to admit that often young people are judged a bit too superficially and they are labeled too easily as a ‘wishy-washy’ generation, lacking passion and ideals. Certainly, there are young people who are fragile, disoriented or infected by the culture of consumerism and individualism,” he said.

“But this must not keep us from recognizing that youth are able to firmly take a chance in life and generously throw their hat into the ring,” he said.

Their focus on the future is a good antidote to the resignation and hopelessness in society, the pope said. They are creative, imaginative and courageous when it comes to change, and they generously give of themselves for others and for ideals like justice and peace.

“With all of their limitations, they are always a resource,” he said.

The pope asked young priests to always pray, always be journeying and always share God’s tenderness with others.

Young priests have a great opportunity to reach out to their lay peers, “not as just another friend,” he said, but as someone who really knows how to share, listen and guide.

“Young people do not need an expert in the sacred or a hero who, from on high and the outside, answers their questions,” the pope said. “Rather, they are attracted to those who know how to sincerely be interested in their life, being by their side with respect and listening to them with love. It’s about having a heart overflowing with passion and compassion, especially toward young people.”

NEXT: Defending sacredness of life offers service to everyone, pope says