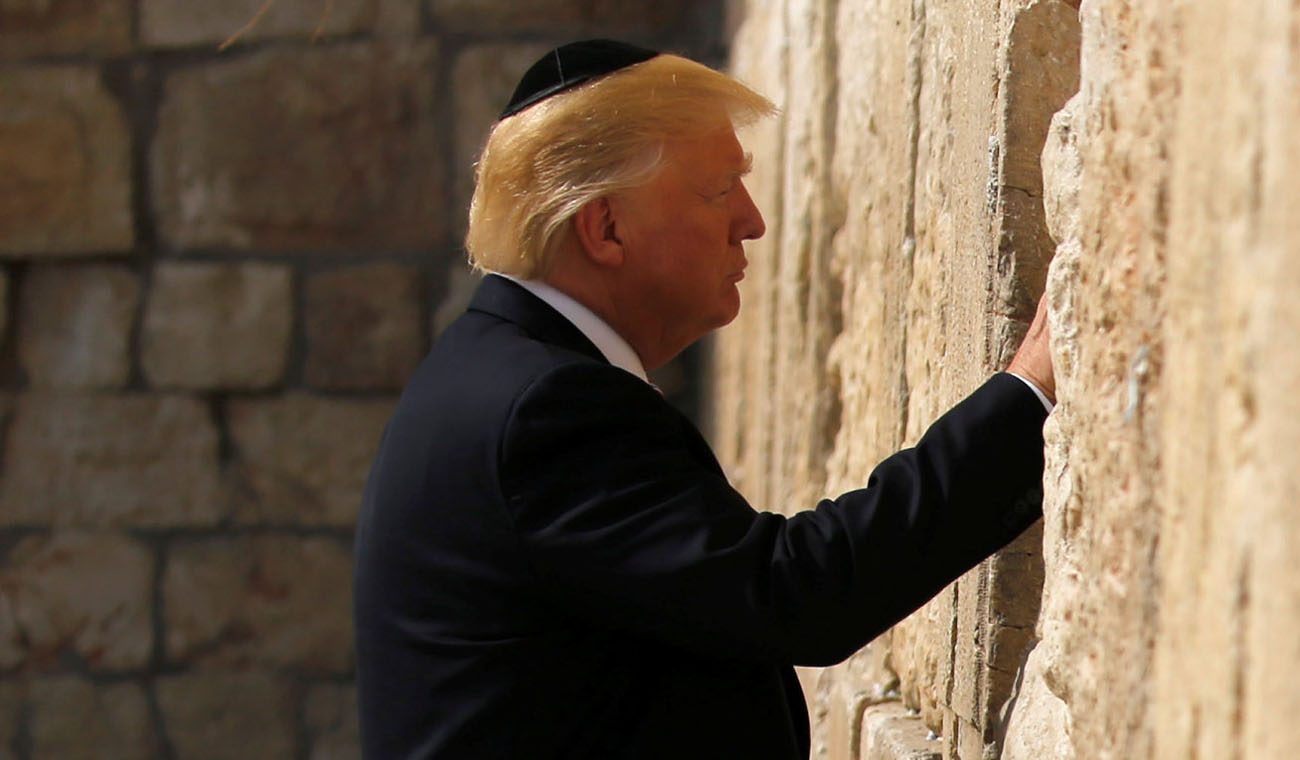 JERUSALEM (CNS) — Following his official welcome to Jerusalem by Israeli President Reuven Rivlin, U.S. President Donald Trump began his two-day visit to Israel and the Palestinian territories with a private visit to the Church of the Holy Sepulcher and Western Wall.

Under tight security and led by the traditional kawas honor guard announcing the way with the thumping of their ornamental staffs, the president made his way by foot through the Old City’s alleyways to the Church of the Holy Sepulcher. He and first lady Melania Trump were welcomed at the entrance of the church courtyard by Greek Orthodox Patriarch Archbishop Theophilos III; Franciscan Father Francesco Patton, custos of the Holy Land; and Armenian Patriarch Nourhan Manougian. The president spoke briefly to the religious leaders and stopped at the entrance of the church for a group photograph after also speaking to a few other religious.

Trump, who also was accompanied into the church by his daughter, Ivanka Trump, and son-in-law, Jared Kushner, spent about 30 minutes in the church, which encompasses the area where, according to Christian tradition, Jesus was crucified, buried and later rose from the dead. At the entrance of the church is the stone of unction, where tradition holds that Jesus’ body was laid out and washed after his crucifixion. Inside the central rotunda is the newly renovated Edicule, where Jesus was buried.

The delegation then walked the short distance to the Western Wall plaza, where Trump was greeted by Rabbi Shmuel Rabinowitz, rabbi of the Western Wall. Wearing the traditional Jewish kippa or skullcap, Trump walked alone to the wall, where he placed his hands on the stones for several minutes. He then placed a note with a prayer into a crack in the wall, a Jewish tradition. Melania and Ivanka Trump visited the women’s section of the wall separately, and the first lady spent a few minutes silently in front of the wall, touching it with her hand.

Trump is the first sitting president to visit the Western Wall in the contested Old City of Jerusalem. Both Israelis and Palestinians claim Jerusalem as their capital city.

The Western Wall, considered the holiest site for Judaism today as a remnant of the retaining wall of the Biblical Jewish Temple, also surrounds the Temple Mount/Haram al-Sharif compound, where the Jewish temple once stood and the location of Al-Aqsa mosque, Islam’s third-holiest site.

Avoiding any symbolic controversy involving the issue of the city’s sovereignty, the Trump administration insisted the visit to the sites be private, vexing Israel by Trump’s refusal to be accompanied by Israeli political leaders to the Western Wall.

Meanwhile, Palestinians said Israel had not allowed a Greek Orthodox Scout marching band to accompany the delegation to Church of the Holy Sepulcher as planned because of the Palestinian flags on their uniform. A spokesman from the Israeli Ministry of Foreign Affairs denied any Israeli involvement in the matter, suggesting that it might have been a U.S. security issue.

In a visit that encompasses both political and religious symbolism, Trump spent two days in Riyadh, Saudi Arabia, with King Salman and other Muslim leaders. He was scheduled to meet with Palestinian President Mahmoud Abbas May 23 in Bethlehem, West Bank, and was expected to urge the Palestinian leader to take productive steps toward peace.

According to media reports, he did not plan to visit Bethlehem’s Church of the Nativity because of an exhibit there supporting hunger-striking Palestinian prisoners in Israeli jails.

In statements upon his arrival in Israel, Trump spoke warmly about the U.S.-Israeli bond and his deep sense of admiration for the country. He also spoke of the need to unite against “the scourge of violence.”

“We have the rare opportunity to bring security and stability and peace to this region and to its people by defeating terrorism,” Trump said at the welcoming ceremony upon his arrival at Ben Gurion Airport, where he was greeted by Israeli Prime Minister Benjamin Netanyahu and his wife, Sara. “But we can only get there by working together. We love Israel. We respect Israel and I send your people the warmest greeting from your friend and ally, from all people in the USA, we are with you.”

The next leg of his first overseas trip as president is slated to include a visit to the Vatican as well as to Brussels.

PREVIOUS: Pope: Christians without tenderness, respect are serpents who divide