Pope: Christians without tenderness, respect are serpents who divide 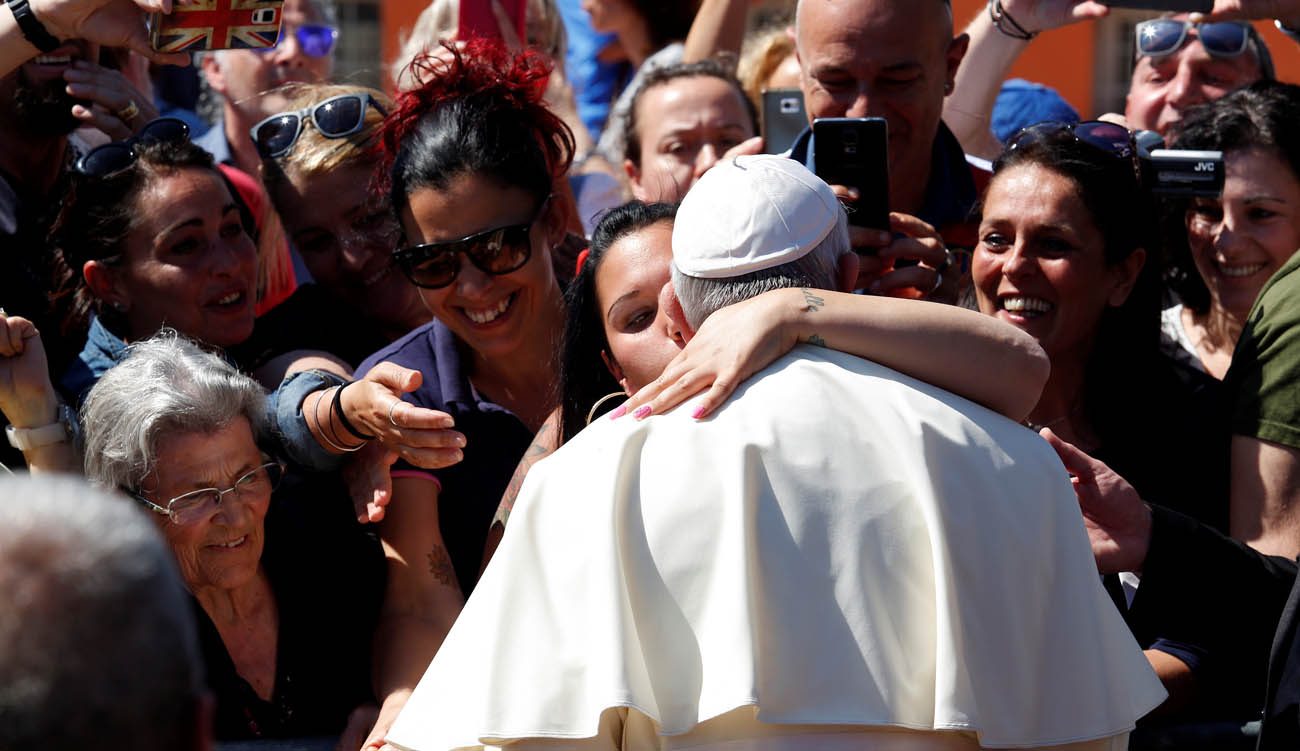 A woman kisses Pope Francis as he arrives for a visit at the parish of San Pier Damiani May 21 at Casal Bernocchi on the outskirts of Rome. (CNS/Remo Casilli, Reuters)

ROME (CNS) — The sin committed most frequently in Christian parishes and groups is bad-mouthing and backstabbing each other, which not only divides the community, it drives away people who come seeking God, Pope Francis said.

“Truly, this pains me to the core. It’s as if we were throwing stones among ourselves, one against the other. And the devil enjoys it; it’s a carnival for the devil,” he told parishioners in his homily during an evening Mass at a parish on the outskirts of Rome May 21.

Pope Francis told parishioners at the church of San Pier Damiani how important their use of language was. As baptized members of the church, every Christian has been given the gift of the Holy Spirit, he said.

People must continue to pray for and safeguard that gift, which includes using a “special language,” not Latin, he said, but something else. “It is a language of tenderness and respect” that is also mirrored in one’s behavior.

“It is so awful to see these people who call themselves Christians, but they are filled with bitterness” or anger, he said in a homily that was off-the-cuff.

The devil knows how to weaken people’s efforts to serve God and safeguard the Holy Spirit’s presence inside them. “He will do everything so our language is not tender and not respectful,” the pope said.

“A Christian community that does not safeguard the Holy Spirit with tenderness and with respect” is like the serpent with the long, long tongue, who is depicted in statues as being crushed under Mary’s foot.

Pope Francis said a priest once told him about some people in a parish whose tongues were so long from wagging gossip that “they could take Communion from the front door; they could reach the altar with the tongue they have.”

“This is the enemy that destroys our communities — chatter,” he said, adding it was also “the most common sin in our Christian communities.”

A language that boasts or shows off “out of ambition, envy, jealousy” not only divides those already gathered, it drives off newcomers, he said.

How many people step inside a parish in search of God’s peace and tenderness, but instead they encounter gossip, competition and “internal fighting among the faithful.”

“And then what do they say? ‘If these are Christians, I’d rather stay pagan.’ And they leave, disappointed,” he said. “We are the ones pushing them away.”

Before celebrating Mass in the parish, the pope heard the confessions of four penitents, greeted the sick, met with members of the Neocatechumenal Way and spent time with people receiving assistance from the local Caritas.

While poverty or not having enough to get by “is a terrible cross,” the pope said, it is the way Jesus chose to come into the world and live.

It’s not about hating the rich, because that is not Christian, but praying for them so they will not become corrupt and they will recognize the wealth “is not theirs, it is God’s that he gave them to administer” by being generous, working honestly and living simply and austerely, he said.

Pope Francis also told them he understood why, because of all the red tape, their pastor built without legal permits the kitchen they use to make meals for those in need. Sometimes things are made so complicated as a way to bring in bribes, he said, since “bureaucracy, usually, loosens with payoffs.”

Earlier, the pope sat down with children and young adults at the parish-run sports center for a brief Q&A outside in the warm sun.

He reminisced about growing up as one of five children who knew how to have fun.

Wanting to illustrate the happy times they had, he also had to preface his anecdote with a “Don’t try this at home” warning, as he told them about a parachuting contest they had which involved jumping off a balcony with an umbrella. One brother went first, and escaped harm by a hair’s breadth.

“These are dangerous games, but we were happy,” he said, emphasizing how they should cherish having a family and relatives who care about them. They should also obey their parents, he added, because they make many sacrifices for their well-being.