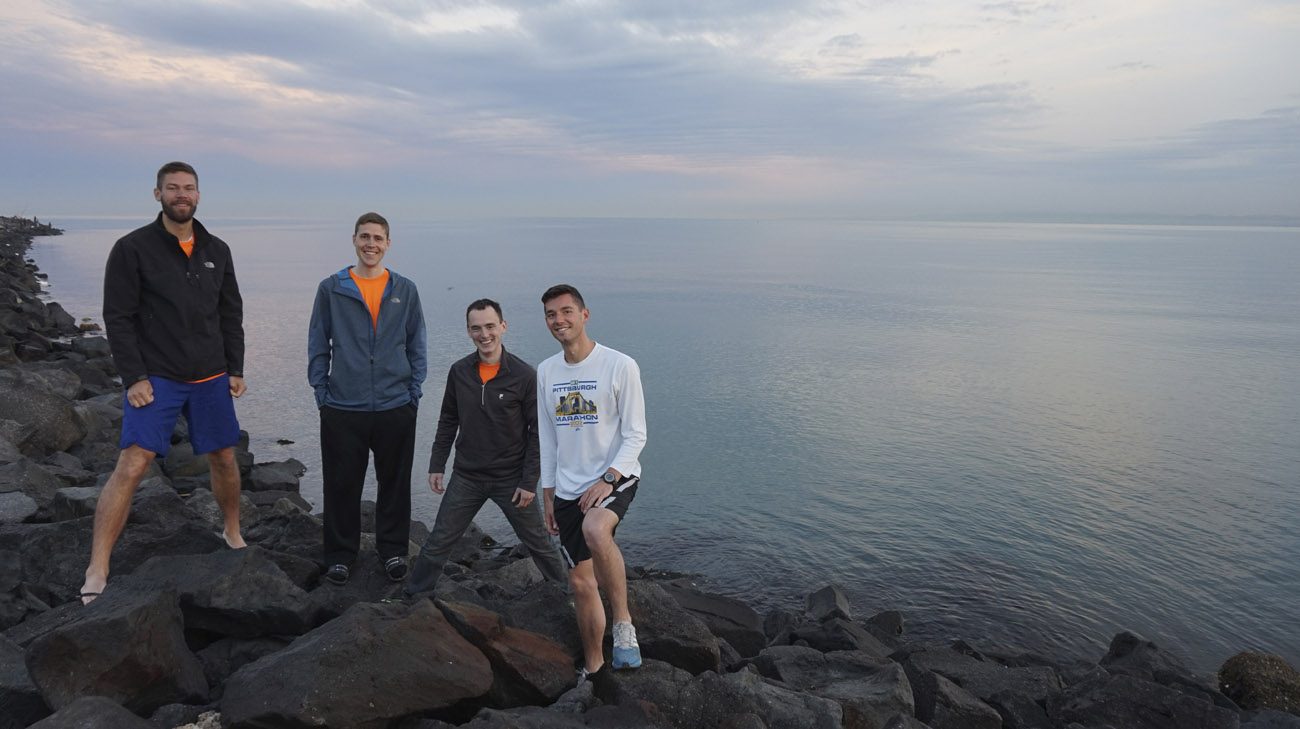 Warm-up included a pre-dawn Mass May 6 at the Pontifical North American College where the students live, followed by packing two vans with nine runners, two drivers and protein- and carb-rich provisions, Christian Huebner of the Archdiocese of Washington, D.C., told Catholic News Service May 4.

One van headed to the Mediterranean Sea near Fiumicino and the other van went east to the Adriatic Sea.

“When we arrive, we dip a finger in the water and run to the middle” of the peninsula, which is about 150 miles across, he said. The students meet up in the middle by evening “in some random parking lot” as long as it had a gas station and pizzeria to replenish tanks and tummies.

He said the men take turns running one leg of five to nine miles to a planned checkpoint and then the finishing runner would “slap hands” to hand-off the virtual baton to the next runner in the relay.

The men stretched and rested in the moving van, encouraging the one on the road along the way, he said.

The one-day run raised close to $30,000 with the added help of an anonymous donor who matched every dollar pledged by individual benefactors. The money goes to the pontifical foundation, Aid to the Church in Need, which will use the funding to continue a program that feeds some of the 12,000 displaced families from Mosul living in Irbil.

The Chaldean Catholic Archeparchy of Irbil, in conjunction with other aid agencies, is the largest provider of aid to the displaced families in that area, the seminarians said on their “Roman Run for Erbil” donor page.

This was the third year a group of U.S. seminarians — led by Deacon Michael Zimmerman of the Archdiocese of Boston — got together to do a fundraising run for a common cause. Past efforts raised money for a seminary in Haiti, a pro-life center in Ukraine and the Syriac Catholic Church, Huebner said.

Unfortunately, he said, Deacon Zimmerman, the run’s founder, had to miss this year’s run because of a soccer injury.

The biggest and most important aim of the relay run, Huebner said, was supplying prayer for and solidarity with those who are suffering.

There was a set schedule for praying the Psalms and prayers of the breviary so that along the route the men on both sides of the peninsula “would be like opposite sides of a choir” miles away. Prayer intentions ran through each runner’s head as his feet hit the road, praying for the refugees fleeing from Islamic State militants and for benefactors offering their prayers, he said.

“One thing the Holy Father says,” is the importance of “taking prayer with you along the way” every day, and the “Roman Run” does that, he said, with prayer being a part of the training, fundraising and race.

“We use the opportunity to encourage people to a life in prayer, no matter where we find ourselves in life,” Huebner said. “Prayer can soak into any part of life like a sponge.”