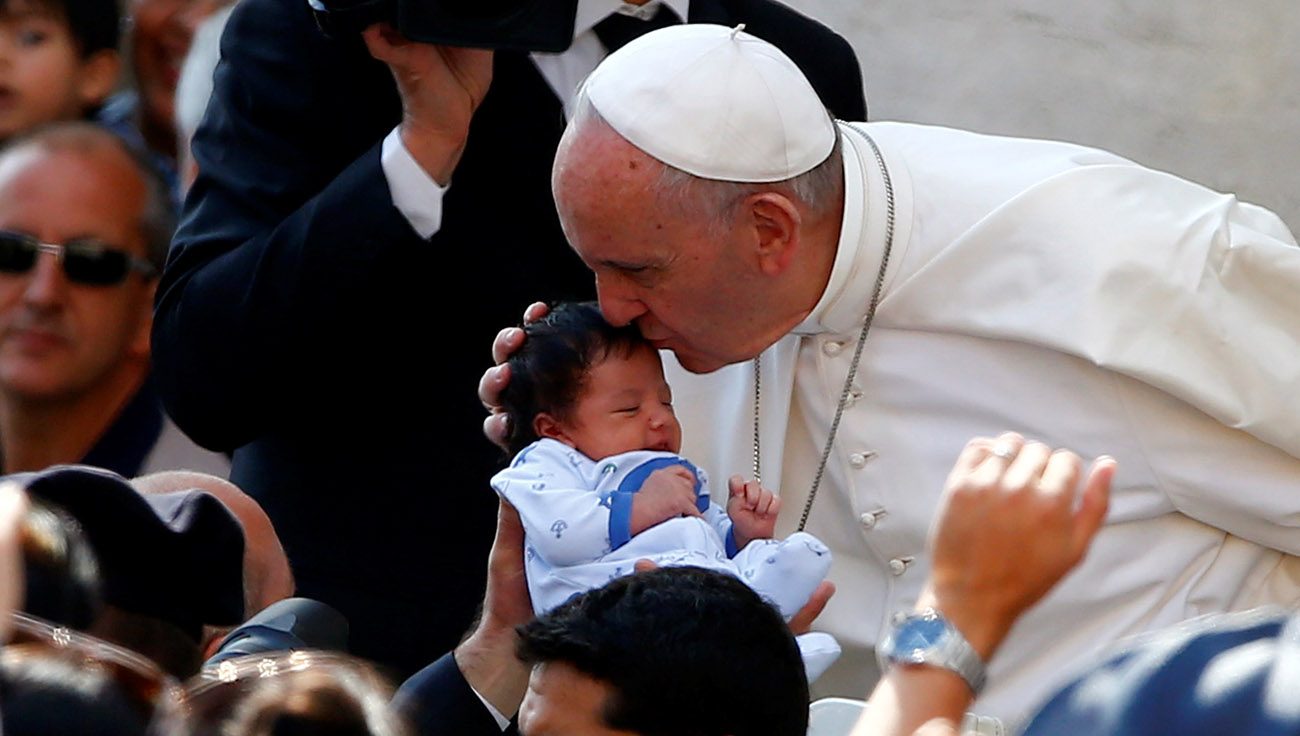 Pope Francis kisses a baby as he arrives to lead his general audience in St. Peter's Square May 10 at the Vatican. (CNS photo/Tony Gentile, Reuters)

VATICAN CITY (CNS) — Mary, like many mothers throughout the world, is an example of strength and courage in accepting new life and in sharing the suffering of their children, Pope Francis said.

Although she had no idea of what awaited her when she accepted to bear God’s son, “Mary in that instant appears to us like one of the many mothers in our world, courageous to the extreme,” the pope said May 10 at his weekly general audience.

Her motherly love and courage is seen again at the foot of the cross, he said, where “she teaches us the virtue of waiting even when everything appears meaningless.”

Just a few days before he was to visit Fatima, Portugal, to commemorate the 100th anniversary of the Marian apparitions there and as people in many countries were preparing to celebrate Mother’s Day, Pope Francis used his audience talk to focus on Mary and hope.

“We are not orphans, we have a mother in heaven,” he said. “In difficult moments, may Mary, the mother that Jesus has given to us all, always guide our steps.”

The Gospels portray Mary mostly as a “woman of silence,” but one who “meditated on every word and every event in her heart,” the pope said. “She is not a woman who is depressed in front of the uncertainties of life, especially when nothing seems to be going right. Instead, she is a woman who listens.”

Among the 15,000 pilgrims gathered in St. Peter’s Square was a group from the pope’s native Argentina. Addressing Spanish-speaking pilgrims later, the pope greeted his compatriots who recently celebrated the feast of the country’s patron, Our Lady of Lujan.

“My heart was in Lujan in these days. May the Lord bless you all,” he said.

Continuing his series of talks on Christian hope, Pope Francis reflected on Mary as “the mother of hope.”

“Don’t forget: There is always a great relationship between hope and listening. And Mary is a woman who listens, who welcomes existence as it comes to us with its happy days as well as its tragedies, which we never want to encounter,” he said.

Mary’s silence in the Gospel, the pope continued, is particularly evident in Jesus’ final moments where her presence during Christ’s passion is “eclipsed” until “she reappears at a crucial moment: when a good number of friends vanished because of fear.”

“Mothers do not betray, and in that instance, at the foot of the cross, none of us can say which one was the crueler passion: that of the innocent man who dies on the scaffold of the cross or the agony of a mother who accompanies her son in his final moments of life,” he said.

Mary, he added, was “there” not just out of faithfulness to God’s divine plan but also because “of her instinct as a mother who just suffers” every time her child does.

NEXT: Catholics, Orthodox must work toward unity in diversity, pope says