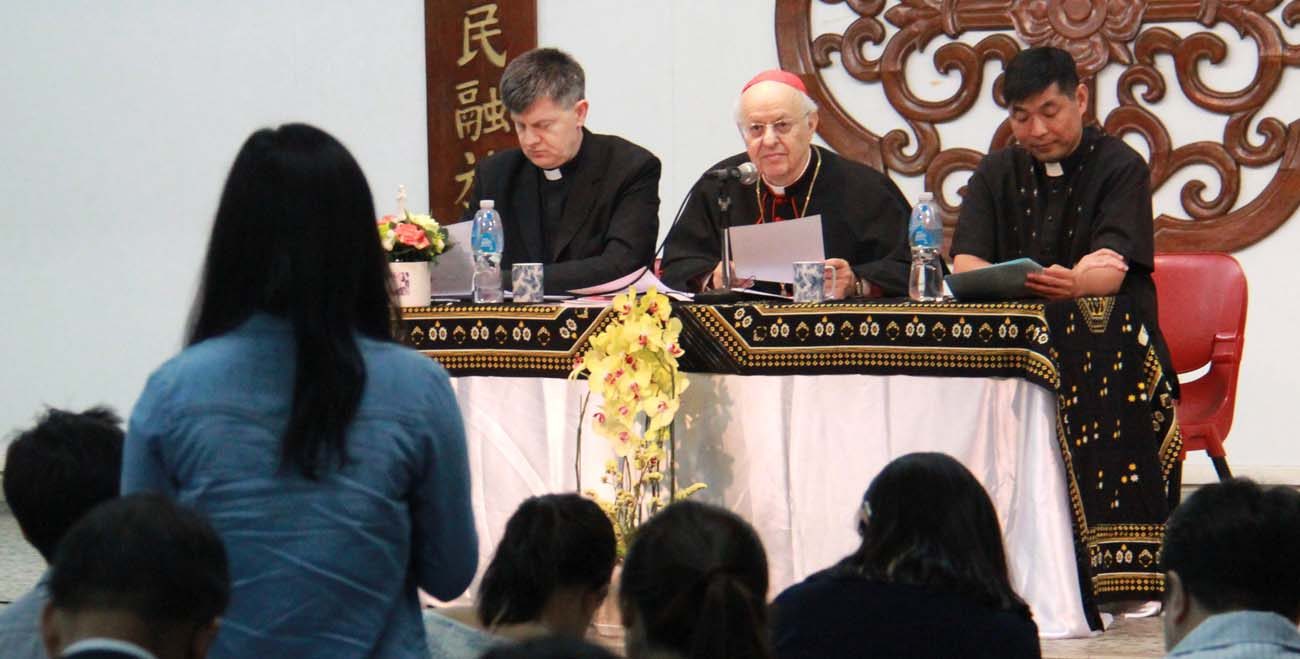 Cardinal Lorenzo Baldisseri, secretary-general of the Synod of Bishops, is seen in Hong Kong May 13. He encouraged young Catholics there to get involved in preparations for the next synod gathering, to be held in Rome in October 2018. (CNS photo/Francis Wong)

HONG KONG (CNS) — Cardinal Lorenzo Baldisseri, secretary-general of the Synod of Bishops, encouraged young Catholics in Hong Kong to get involved in preparation for the next Synod of Bishops, which will discuss young people.

Ucanews.com reported that during a 90-minute dialogue held May 13 with a group of mostly young Catholics, Cardinal Baldisseri explained how the church is preparing the October 2018 synod, which has the theme, “Young people, faith and vocational discernment.”

Cardinal Baldisseri added that the theme “referred to all young people on the earth, not just Catholics and Christians.”

He encouraged Hong Kong Catholics not to ignore the “opportunity to be involved” in the synod and to keep a look out “at the general secretariat website for a questionnaire, which you can fill out online.”

University student Philomena Poon and some other participants told ucanews.com they are interested in expressing their views.

“In the past, we got pontifical writings on issues such as family, marriage and love, but this time it is about young people, and we also get a cardinal coming here to meet us. It shows the church pays heed to us, which gives us motivation to get involved,” said Poon.

At the meeting, Cardinal Baldisseri’s first event after his arrival in Hong Kong, he took questions from students, a seminarian, a young family, a disabled person, a refugee and others.

Young people asked for advice on how to resist the trend of being against or without the church; the key elements to make one’s vocation mature; how to fulfill “everyday discernment” in family relationships, work and children’s education.

Citing Pope Francis’ remarks on the “culture of the ephemeral,” which stressed enjoying the moment, the cardinal asked the youth “to be revolutionaries” and have the courage to swim against the tides.

When a worker from the youth ministry asked him how adults could deal with same-sex attraction in young people, the cardinal stressed the importance of accompaniment and helping young people with “day-to-day discernment.”

Cardinal Baldisseri was making his first seven-day visit to two Chinese communities in East Asia. Besides meeting with young people, he delivered a talk on family May 14 as part of the diocesan program for the Year of Family 2017. He also was scheduled to attend a conference on family in Taiwan and meet with youth there.

There are no figures on the number of youth among Hong Kong’s 389,000 Catholics. Government statistics for 2016 show 25 percent of the city’s population of 7.3 million is between 16-34 years of age, ucanews.com reported.

NEXT: Priest stabbed while celebrating Mass in Mexico City