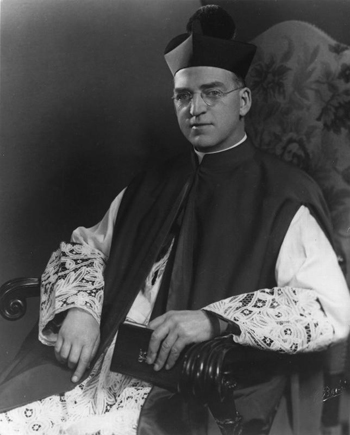 Father Edward Flanagan, the Irish-born priest who founded Boys Town in Nebraska, is pictured in an undated photo. The Vatican has taken a key step forward in the priest’s sainthood cause, local officials said May 15. (CNS photo/courtesy Boys Town)

OMAHA, Neb. (CNS) — The Vatican has taken a key step forward in the sainthood cause of Father Edward J. Flanagan, the founder of Boys Town, local officials said May 15.

The Congregation for Saints’ Causes found that the Archdiocese of Omaha’s three-year investigation into Father Flanagan’s life was thorough and without error, and includes evidence of a reputation for sanctity, said Steven Wolf, president of the Father Flanagan League Society of Devotion, which has helped lead the sainthood effort.

“This cause is moving forward toward the next step, which we pray will move Servant of God Flanagan’s status to that of ‘venerable,'” Wolf said at a news conference at St. Cecilia Parish in Omaha attended by, among others, Omaha Archbishop George J. Lucas; Father Steven Boes, executive director of Boys Town; members of the tribunal and commissions the archbishop appointed to investigate the cause; and backers of the effort.

The Vatican’s investigation will continue, Wolf said, and focus on signs of heroic virtue, which could lead to the title “venerable.” Generally, a miracle attributed to the intercession of Father Flanagan would be required for beatification, and a second miracle for sainthood.

Wolf also thanked Archbishop Lucas and members of the tribunal, historical and theological commissions for their support and hard work, and presented them with gifts including a framed poster, coffee mug and greeting cards honoring Father Flanagan and the cause for sainthood.

Archbishop Lucas said the effort is in God’s hands, and prayers and devotions to Father Flanagan will help further the cause.

“I’m delighted at the news being shared today,” he said. “I’m delighted that a priest of the archdiocese could do so much with God’s grace.”

Father Boes, who also is pastor of Immaculate Conception Parish on the Boys Town campus, said “any recognition of our founder is welcome to us because it reminds people of the life and works of this great man.”

Father Flanagan’s contention that “there are no bad boys” is grounded in Catholic theology and continues to be at the core of the work at Boys Town, which is celebrating its 100th anniversary, Father Boes said.

Father Flanagan’s founding of Boys Town began with a rented house in Omaha and five boys who needed a home. It has grown to include a main campus of group homes and churches for boys and girls, a grade school and high school, post office and bank, as well as a national research hospital in Omaha, a national hotline and other services and locations around the country.

The archdiocese officially took up the cause of his sainthood Feb. 27, 2012, with Archbishop Lucas placing a notice on the doors of St. Cecilia Cathedral and later naming him a “servant of God” and installing the tribunal and commissions. The archdiocese closed the local phase of the investigation with a Mass June 18, 2015, passing the information it had gathered onto the Vatican.

PREVIOUS: Search for common ground will be key to pope’s meeting with Trump