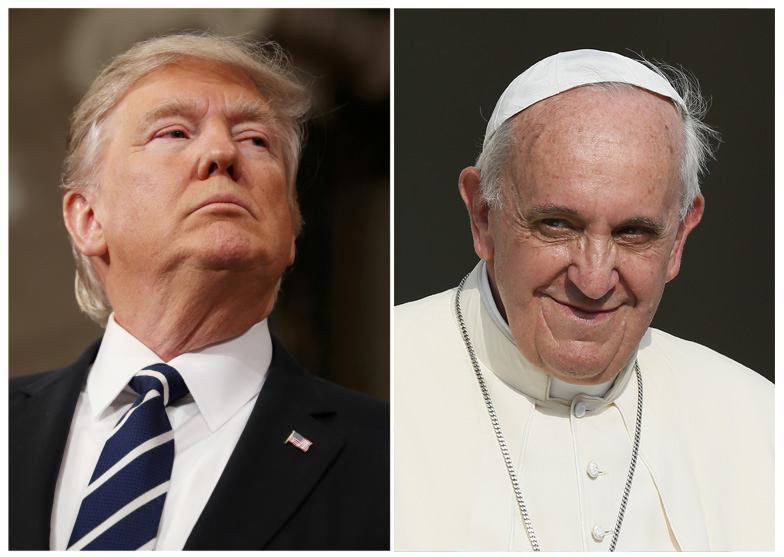 VATICAN CITY (CNS) — Despite a few pointed comments in the past and fundamental differences on issues such as immigration, economic policy, military spending and climate change, sparks are not expected to fly May 24 when Pope Francis welcomes U.S. President Donald Trump to the Vatican.

The two will have a private conversation, with interpreters present, and while anything is possible, protocol dictates that the joint statement issued after the meeting will describe it as “cordial.”

Going into the meeting, Pope Francis made it clear he hoped it would be.

On Pope Francis’ flight back to Rome from Portugal May 13, a reporter asked him, “What are you expecting from a meeting with a head of state who seems to think and act in a way contrary to your own?”

Pope Francis said he would look first for areas of agreement and shared principles — his basic recipe for creating “a culture of encounter.”

“There are always doors that are not closed,” the pope said about his meeting with Trump. “We have to find doors that are at least a little open in order to go in and speak about things we have in common and go forward. Step by step.”

The key, he said, is “respect for the other, saying what we think, but with respect, walking together. Someone sees things in a certain way: say so, be honest in what each of us thinks.”

Honesty, even if not completely diplomatic, characterized a couple of pointed remarks Pope Francis and then-presidential candidate Trump made in reference to the other’s positions.

Flying in February 2016 to Rome from Mexico, where he had just paid homage to people who have lost their lives trying to cross into the United States, Pope Francis was asked about candidate Trump’s promise to build a wall the entire length of the border.

“A person who thinks only of building walls, wherever it may be, and not of building bridges, is not Christian,” the pope said. He added that he would not tell anyone how to vote and that he would “have to see if he said these things, and thus I will give him the benefit of the doubt.”

Trump responded by saying that the Mexican government had given Pope Francis only “one side of the story” and was “using the pope as a pawn.”

Also, he said, “for a religious leader to question a person’s faith is disgraceful. I am proud to be a Christian and as president I will not allow Christianity to be consistently attacked and weakened, unlike what is happening now.”

Efforts to protect freedom of conscience for employers and health-care workers and the need to defend religious freedom are likely to be a starting point for finding common ground.

A discussion about religious persecution could open the door to Pope Francis restating his conviction of the moral obligation to welcome strangers, especially those fleeing persecution, terrorism, war and abject poverty.

Protecting the unborn is another common concern and would provide an opening for Trump to talk about his Supreme Court nominee and his steps to halt funding of abortions overseas. It also would give Pope Francis an opening to talk about the protection of all life — especially the weakest — with health care, education, job opportunities and a clean environment where people can thrive.