All in Detroit Archdiocese ‘summoned’ to engage in new evangelization 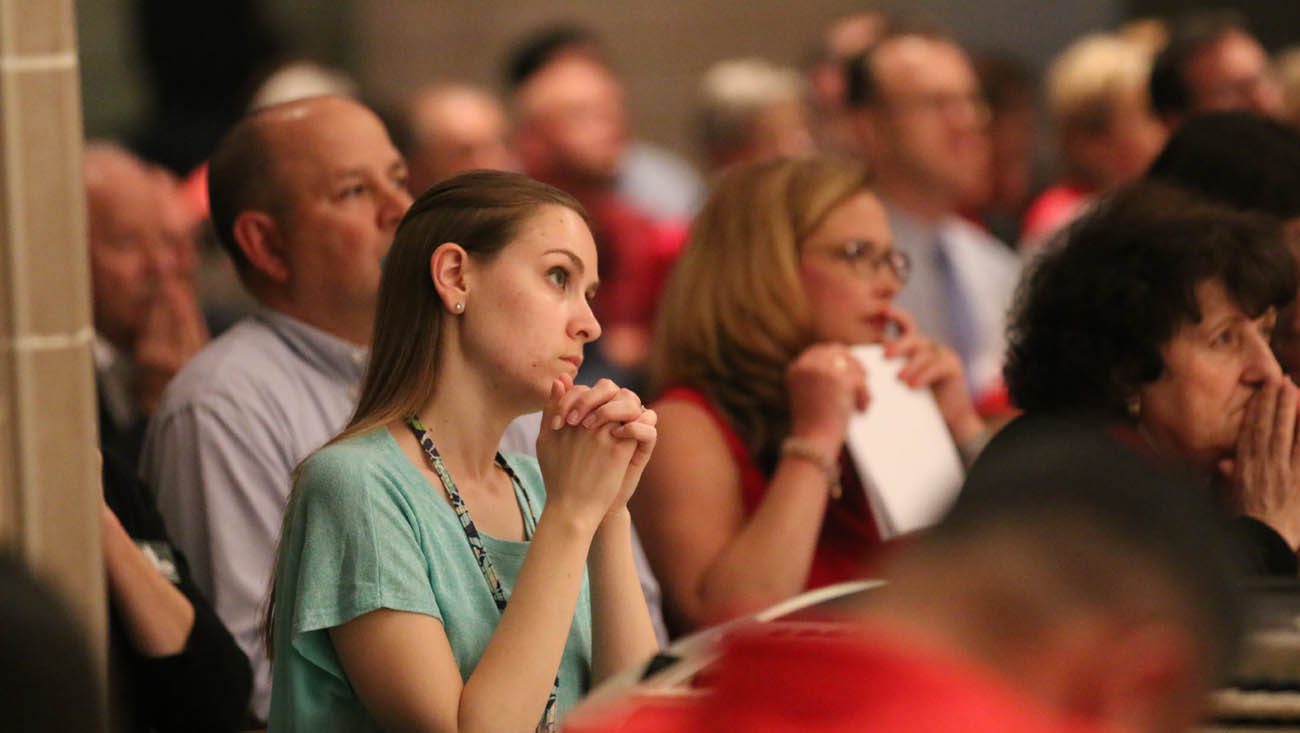 Members of the Detroit archdiocesan synod and others pray during Mass on the vigil of Pentecost June 3 at the Cathedral of the Most Blessed Sacrament in Detroit. (CNS photo/Jonathan Francis, Archdiocese of Detroit)

DETROIT (CNS) — In a landmark letter released on the vigil of Pentecost, Archbishop Allen H. Vigneron challenges each person, parish and institution in the Archdiocese of Detroit to undergo a “missionary conversion.”

This conversion should be geared toward “making one’s relationship with Jesus and alignment with his will the central guiding principle of every aspect of life,” he said.

The archbishop’s pastoral letter, the result of months of careful discernment and prayer, contains the chief shepherd’s personal reflections and response to the historic archdiocesan Synod 16, a three-day gathering of lay faithful, clergy and religious in downtown Detroit called last fall to propose ways to transform the culture and better share the Gospel message in the Archdiocese of Detroit.

In the wide-ranging letter, which is called simply “Unleash the Gospel” — the adopted tagline for the archdiocese’s missionary efforts — Archbishop Vigneron lays out his vision for the future of the archdiocese as an “outward, mission-focused church” and calls for various institutions and ministries to reimagine the ways in which they help people to encounter Jesus.

“Over the last three years, we, God’s family in the Church of Detroit, have already been experiencing a spiritual renewal as we have prepared and strategized for a missionary transformation of the Archdiocese,” Archbishop Vigneron writes in the letter’s introduction. “The synod was the ignition spark that is to set the archdiocese ablaze.”

The letter — along with a re-envisioned coat of arms for the Archdiocese of Detroit — was released June 3 following Mass for the vigil of Pentecost at the Cathedral of the Most Blessed Sacrament. It is available on a specially designed website, unleashthegospel.org, along with a video interview with the archbishop.

The pastoral letter is broken into six sections, each with a different purpose. In addition to an introduction and conclusion, Archbishop Vigneron writes at length about the need for a “new evangelization” both broadly and in the Archdiocese of Detroit, reflecting on the roots of the wide-scale rejection of the Christian faith in secular society and drawing inspiration from the wisdom of saints such as St. John Paul II and Blessed John Henry Newman.

“In the last half century, even as the Western world has become increasingly secularized and countless people have abandoned the faith into which they were baptized, the church has been ringing out a call for all Catholics to awaken their baptismal identity as missionary disciples,” Archbishop Vigneron writes. “All are being summoned to engage in a new evangelization — a renewed proclamation of the good news of Christ to the people of our time.”

Though the archbishop has repeatedly said the synod and pastoral letter are not about a “membership drive” or a “new program” for the archdiocese, it is about fostering a new outlook and encouraging enthusiasm for evangelization — which will involve some tangible changes for the archdiocese and its parishes, he said.

The letter contains what the archbishop describes as “guideposts,” or broad principles for reform, as well as specific action steps for individuals, families, parishes and the archdiocesan Central Services to undertake in the years ahead to better position themselves to minister with the heart of an evangelist.

The action steps — which correspond to the nine propositions held up by Synod 16 as important for the archdiocese’s growth — range in specificity and involve both short-term and long-term projects, from a call for priests to offer “radical availability” of the sacrament of reconciliation to a charge for the archdiocesan Central Services to re-examine formation programs for confirmation and marriage preparation.

“This is not just the project of a year. This is the project of a generation,” Archbishop Vigneron said in a video accompanying the release of the letter. “I have been clear in my own mind, and I’ve said this, that this represents a real tectonic shift in the life of our local church for hundreds of years.”

No one is exempt from their responsibility to help build up and shake the rust from the church’s wheels, the archbishop said. In a section titled “No Bystanders,” Archbishop Vigneron lays out specific charges for laity, priests and deacons, those in consecrated life and lay apostolates, and even youths and young adults in helping to “change the DNA” of the Church in southeast Michigan.

In the past, the archbishop said, the church’s work has been to build up institutions — such as hospitals, schools and parishes — through which people were brought to Christ and grew in holiness, “but the institutional connection is not sufficient anymore.”

Instead, he writes, “now is the time for our evangelization to become more intentional and more person-to-person.”

Since the Second Vatican Council and continuing with the Archdiocese of Detroit’s last synod in 1969, the Church has increasingly looked to its members to carry the Gospel message to a changing world, he said, and every individual is “called to consider how the Lord may be calling us to go out, beyond where we may have gone before — even to the most unlikely places — to share the good news of Jesus with those who may never have heard it.”

The archbishop said the difficult parts of the Gospel, such as the need for repentance, must be wisely presented as part of the overall message of salvation, but added personal testimony can play an “indispensable” role through the witness of someone whose life has already been transformed by Christ.

The message of Jesus is most attractive when it is accompanied by the Gospel qualities of joy, hospitality and generous service to others, the archbishop said, quoting Pope Francis’ apostolic exhortation “Evangelii Gaudium” that “an evangelizer must never look like someone who has just come back from a funeral.”

Archbishop Vigneron said he views the letter as a culmination — though not the end point — of the work leading up to and following Synod 16, starting in 2014 with a year of prayer for a new Pentecost and continuing with the participation of thousands of lay Catholics in a series of parish dialogue gatherings last summer.

While the archbishop said he hopes the letter — his fourth as archbishop of Detroit — will be well-received, he’s realistic that it won’t be fully unpacked in a day.

“It’s clearly written not to be just a two-page executive summary. I’ve wanted to put it out fully,” Archbishop Vigneron said of the nearly 40-page document. “There’s a little concern that we might be biting off more than we can accomplish, but I’m OK with that. Part of this isn’t just ambition; it’s enthusiasm, and I don’t want to squelch that.”