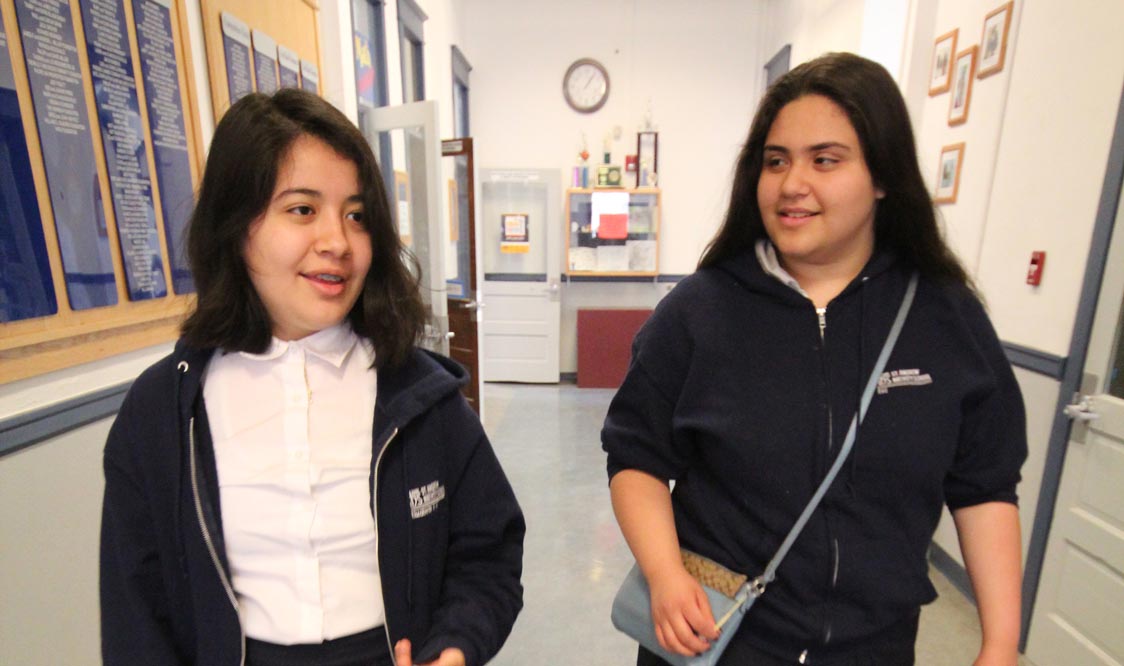 PORTLAND, Ore. (CNS) — Countless immigrants across the country live in a climate of fear sparked by actions in the new administration, including President Donald Trump’s plan to build a U.S.-Mexico wall, his executive order on immigration enforcement and several highly public raids.

Alongside the concerns of adult immigrants are the worries of their children. At dinner tables and in classrooms, young Latinos are trying to make sense of overheard conversations, the onslaught of immigration-related stories disseminated by news outlets and activists, and — foremost — the instability in their families.

“Students are on edge, often distracted, occasionally distraught because they fear for their family’s well-being,” said Tim Joy, principal of De La Salle North Catholic High School in Portland, which is nearly 40 percent Latino. “We’ve had many students in tears.”

He said some parents are too fearful to leave the house to shop for food, “so students are the ones running family errands.”

Over the past several months, Joy and fellow Catholic school administrators in the Archdiocese of Portland have been trying to find ways to support Latino students and their parents.

“Our teachers and counselors do what they can to comfort, forbear with missed assignments — helping in any way possible,” Joy told the Catholic Sentinel, newspaper of the Portland Archdiocese.

A 2013 study by the California-based advocacy organization Human Impact Partners found that deportation scares take a physical and mental toll on the children of immigrants who entered the country without authorization. Not surprisingly, researchers concluded: “U.S.-citizen children who live in families under threat of detention or deportation will finish fewer years of school and face challenges focusing on their studies.”

In western Oregon’s Catholic schools, Hispanic students make up about 10 percent of total enrollment; nationally, 15 percent of Catholic schoolchildren are Hispanic. The schools do not track immigration status.

Tayz Hernandez is Hispanic and a student at Jesuit High School in Beaverton. She said the past few months have been “very stressful.”

Her mother, a native of Mexico who does not have legal documentation, has heard terrifying rumors about sudden deportations from Hispanic co-workers. “She tries not to believe them, but it’s difficult,” said Hernandez.

The high school senior, bound for Seattle University in a few months, said she follows the news closely, trying to absorb and understand the latest developments so she can explain them to her mother. She attempts to put her mom’s mind at ease while suppressing her own worries.

“When I look at the news, I have to remind myself that nothing has happened yet, she hasn’t committed any crimes so there’s no reason for her to be deported,” Hernandez said. “But there’s always this impending fear.”

Like De La Salle, St. Andrew Nativity School in Northeast Portland has a large number of Latino students and serves low-income families. Nativity eighth-grader Elizabeth — her last name has been withheld at the school’s request — said she constantly worries about her parents and brothers, all of whom were born in Mexico.

“You don’t open the door for anyone unless you know them,” Elizabeth told the Catholic Sentinel. “My parents talk about it, my friends talk about it,” she said. “What would I do if my parents were deported? What would happen to me?”

Hispanic families with legal documentation are not immune from fear. For example, Teresa Ramirez, mother of a ninth-grader at La Salle Prep in Milwaukie, said she feels “like everything is up in the air, everything is unstable.”

“I have cousins who are here illegally, and I was once there, too, so I know the feeling,” she said, adding that she’s at times received suspicious looks when in public. “Sometimes I feel like I want to hide, but I’m proud of my culture and my faith; my faith keeps me going.”

Ramirez and a number of Hispanic parents with children in Catholic schools expressed gratitude for the support from Portland Archbishop Alexander K. Sample. The archbishop told a crowd of Hispanic Catholics at a Dec. 10 Mass to celebrate the feast of Our Lady of Guadalupe. “It does not matter to me from where you have come, when you came, or whether you have the proper documents or not. You are loved.”

In the front office at Nativity are handouts in Spanish and English about what to do if U.S. Immigration and Customs Enforcement agents knock on the door. The school sent home a message assuring parents and students that Nativity is “a safe place, nobody has to self-identify on their immigration status and we welcome conversation,” said Lizzie Petticrew, vice principal of the middle school.

Nativity also hosted a know-your-rights event for parents in March, led by a Catholic Charities of Oregon staff member.

Scott Powers, Christian service director at Jesuit High School, said most Jesuit universities have taken a strong stance against Trump’s immigration policies and that “Jesuit high schools have stood with them.”

Jesuit has regular brown-bag lunches where tough topics are addressed head-on, including immigration. “We want to have these discussions,” said Powers. “We are promoting Catholic social teaching.”

Maritza Mendez is a guidance counselor at La Salle, and her office saw an influx of concerned students after the election.

“We’re just trying to create a space where students can come and express what their thoughts and feelings are,” she said. For many Latinos with immigrant families, these fears have long been present. But now, she said, “they are carrying so much more.”

Scott is special projects reporter for the Catholic Sentinel, newspaper of the Archdiocese of Portland, Oregon.

NEXT: All in Detroit Archdiocese ‘summoned’ to engage in new evangelization