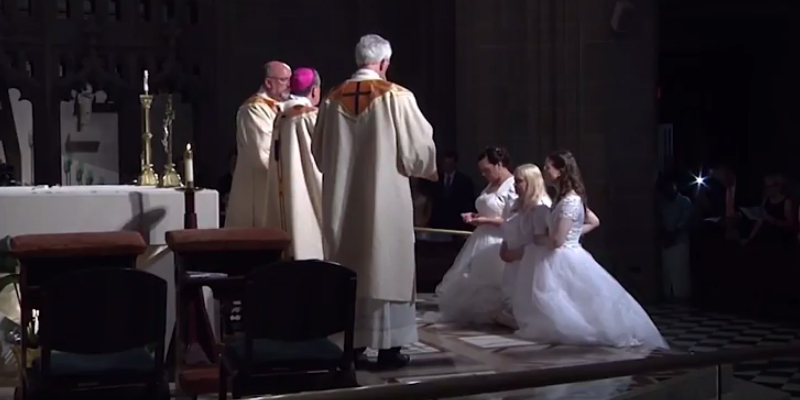 DETROIT (CNS) — Three brides in long, white dresses stood before the altar of the Cathedral of the Most Blessed Sacrament in Detroit. There was not a single groom in sight.

Like the 10 wise virgins from Matthew’s Gospel, each carried a lighted lamp. Together, they joined their voices in an antiphon, “I am espoused to him whom the angels serve.”

These women are “brides of Christ,” and through this ceremony, they have sealed their intention to dedicate their lives to God in perpetual virginity.

“It’s a promise that we make to be faithful to Christ all our life,” Theresa Jordan explained shortly after the June 24 ceremony. “(We) make him a promise of our virginity as a gift back to him.”

“Making a resolution to live in perfect chastity my whole life, I get to testify that God satisfies. He is enough,” Karen Ervin added.

This particular ceremony of consecration had never been performed before within the Archdiocese of Detroit. As far as records show, it was the first time in the United States that three women committed their lives at the same time in this way.

Yet this vocation, the order of virgins, whose members are known as “consecrated virgins living in the world,” dates back to the very beginnings of the church.

“If you’ve heard of St. Cecilia or Agnes or Lucy, they were all virgins living in the world,” said the third bride, Laurie Malashanko, referring to first-century martyrs.

Women called to this vocation do not live in a community as religious sisters do, nor are they called by a title like “sister” or wear distinguishing garb. These three women will continue their professional careers — Jordan as a college professor; Malashanko as an acquisitions editor for a publishing company; and Ervin as a principal at an all-girls Catholic high school.

As consecrated virgins, however, they intend to show a profound commitment to the Lord during their everyday interactions.

“I think young women really need to see who they are, and who they are is reflected in God’s eyes not the world’s eyes,” said Ervin, who had already explained her vocation to the students at her school. “I witness that to them and they know that I’m completely captured by God.”

During the ceremony, the three brides each placed their hands between the hands of Detroit’s Archbishop Allen H. Vigneron and requested that he accept their resolve to live in chastity. Similar to the sacrament of holy orders and religious profession of vows, the women then lay prostrate while the congregation petitioned the saints to intercede.

The newly consecrated also received a prayer book containing the Liturgy of the Hours along with wedding veils and rings, clearly symbolizing their mystical marriage to Christ.

“Consecration, in general, means something is being set aside. It’s set aside for God alone,” said Judith Stegman, a consecrated virgin and president of the U.S. Association of Consecrated Virgins, a group founded to facilitate communication among those who follow this vocation.

“In this case what is being set aside is a person,” she told Catholic News Service.

To be set aside as a bride of Christ, the woman must have lived a life of perfect chastity. This is another factor that distinguishes the vocation of consecrated virginity from religious orders, which women may join if they are widowed or if they resolve to live a chaste life from that day forward.

“(We) image the church herself as virgin, as bride, as mother, so this whole vocation reflects Christ’s spousal union with his church,” said Malashanko.

Although prevalent in the early church, the vocation of virgins living in the world disappeared after the 11th century as women living a life of chastity came together in communities. By the time of the Second Vatican Council, the consecration of women existed entirely in conjunction with religious life.

“The rite of consecration of virgins in the world dropped off over the centuries as monastic community life for women developed,” explained Mary T. Kantor, who studied the vocation extensively for her doctoral dissertation at Harvard Divinity School. “The rite for women living in the world was brought back with Vatican II. It is specifically noted in the liturgy document, ‘Sacrosanctum Concilium.'”

The renewed rite for virgins living in the world is both overseen and administered by diocesan bishops, making it necessary for each diocese to develop its own formation program if a woman within its borders feels called to the vocation. This requirement, combined with this rite’s novelty, slowed its spread in the United States in the decades directly following Vatican II.

“During my research, I spoke with someone in the bishop and/or vocation offices of each diocese in the country,” said Kantor in an email interview with CNS. She had begun her national survey in the early 2000s.

“Some had no knowledge of the rite,” she said. “I was hung up on more than once by those who thought I was joking or a prank caller. One secretary in a diocesan office said: ‘I’ve never heard of it, and if I’ve not heard of it, it must not be happening.'”

Today, the U.S. Association of Consecrated Virgins counts about 245 consecrated virgins living in 106 dioceses across the United States. For this first consecration ceremony in the Archdiocese of Detroit, a congregation of hundreds as well as two dozen priests and deacons celebrated alongside the three brides.

“We’re delighted that God should have called these women from our local church,” said Detroit Auxiliary Bishop Donald F. Hanchon, who had helped to oversee the women’s formation. “They’re going to be great witnesses for the Lord in the businesses and careers that they already have.”

A constant stream of friends, family and complete strangers congratulated the newly consecrated at a reception following the ceremony. Between poses with a huge bouquet of red roses, Jordan paused to give advice.

“(Jesus) is waiting for whatever gifts you have to give back to him,” she said, “and to have an eternal relationship even here on earth.”

NEXT: New bishop of Davenport, Iowa, promises love, fidelity for his people