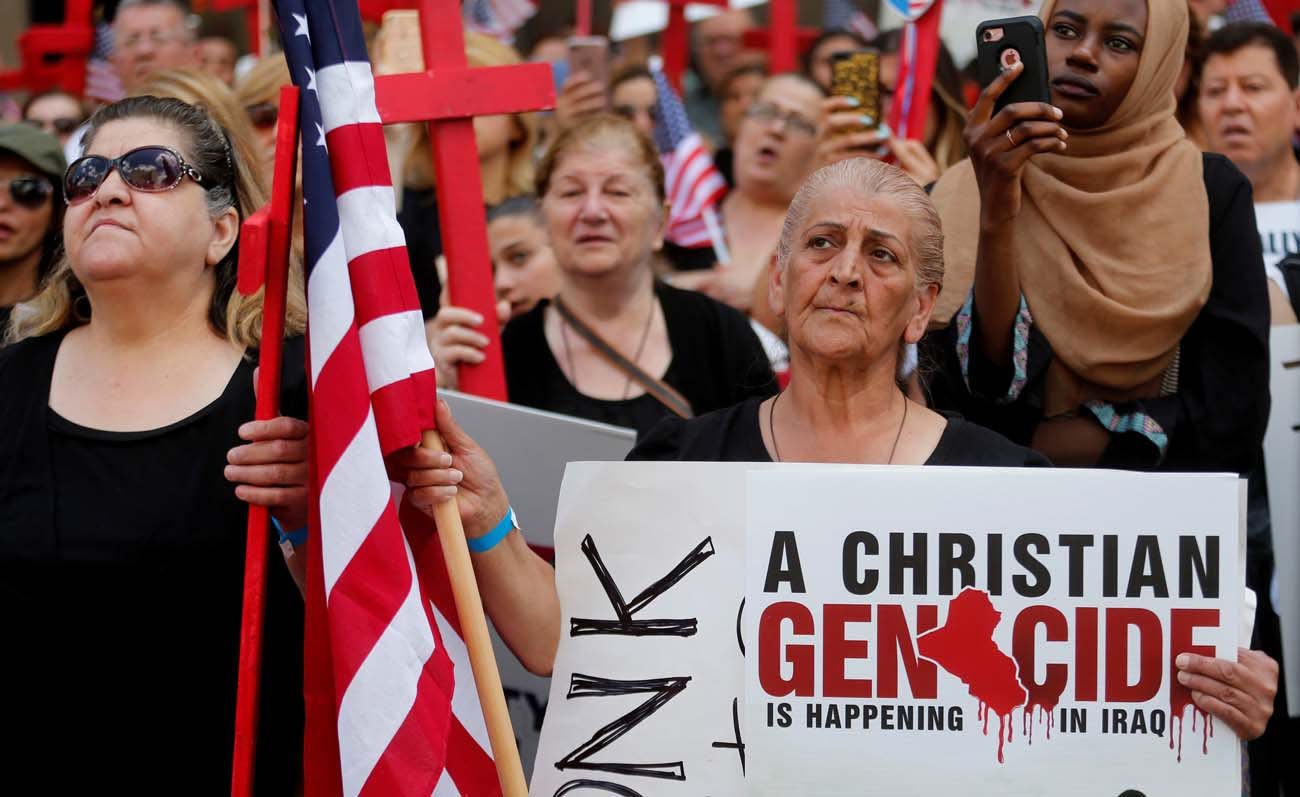 Protesters rally outside a federal court in Detroit June 21 just before a hearing to consider a class-action lawsuit filed on behalf of Iraqi nationals facing deportation. (CNS photo/Rebecca Cook, Reuters)

WASHINGTON (CNS) — Immigrants facing deportation have won the occasional judicial victory, but getting a judge to hear their case poses the bigger problem in immigrants’ desperate attempt to stay in the United States.

On June 26, a federal judge issued a nationwide two-week stay on the deportation of Iraqi immigrants, many of them Chaldean Catholics. About 1,400 Iraqis with “final orders of removal” are protected by the action. Returning them to Iraq could place them in the middle of a war in the majority-Muslim country, with the Islamic State clinging to shrinking territory close to Mosul and fighting against government and Kurdish forces.

Bishop Francis Y. Kalabat of the Chaldean Eparchy of St. Thomas the Apostle, which has its headquarters in the Detroit suburb of Southfield, has used Facebook to keep in touch with the Chaldean community; the Detroit area is home to one of the largest concentrations of Chaldeans in the United States.

On June 11, U.S. Immigration and Customs Enforcement rounded up Chaldeans in the Detroit area. ICE said those apprehended had criminal convictions, including for assault, burglary and drug trafficking. “Each of these individuals received full and fair immigration proceedings, after which a federal immigration judge found them ineligible for any form of relief under U.S. law and ordered them removed,” ICE said.

“We have appealed to (Michigan) Gov. (Rick) Snyder to consider pardons for those with state felonies,” Bishop Kalabat said in a June 22 Facebook posting, while acknowledging that many facing deportation had been charged with federal offenses.

In a June 24 update, the eparchy said several members of Congress, Republican and Democrat, have asked Homeland Security Secretary John Kelly for a meeting on the matter. The American Civil Liberties Union and CODE Legal Aid filed the suit that won the temporary stay on deportations.

In a letter to Kelly, three top officials of the U.S. Conference of Catholic Bishops asked the government to defer Iraqi deportations.

“We do not minimize the serious criminal offenses of which some of these individuals have been convicted; it is entirely appropriate that they be punished for their offenses,” said the letter, released June 20. It was signed by Cardinal Daniel N. DiNardo of Galveston-Houston, USCCB president; Bishop Joe S. Vasquez of Austin, Texas, chairman of the USCCB Committee on Migration; and Bishop Oscar Cantu of Las Cruces, New Mexico, chairman of the USCCB Committee on International Justice and Peace.

“After serving their sentences, however, we believe it would not be just or humane to deport a person who has integrated into American life and poses no evident risk to the local community,” they said. “The fact that they have a significant risk of experiencing persecution and even possible bodily harm because of their faith is, from our moral perspective, an important factor to be weighed in the calculation to deport.”

Complicating matters for immigrants apprehended by ICE is that the agency moves detainees rapidly from location to location, making it even tougher for them to obtain counsel and access to federal or immigration courts, according to the ACLU suit.

“I know my husband is going to be in big trouble if he is sent back,” Sumar Zora told The Detroit News. Hadeel Khalasawi, 43, who was picked up and taken away June 11, had his green card revoked after he served time in prison for an assault when he was a teen; he also had a marijuana possession charge 12 years ago.

Zora added, “What do I tell my children if he is killed? America sent him to his death?”

The Supreme Court June 23 gave a second chance to a U.S. permanent resident scheduled for deportation, saying the man’s lawyer gave him bad advice by having his client plead guilty to a drug charge, which then put him on track for deportation.

Chief Justice John G. Roberts, writing the majority opinion, said Jae Lee’s lawyer was “dead wrong” when he advised Lee that accepting a plea deal would not affect his immigration status. After pleading guilty and receiving a one-year sentence, Lee was transferred to a detention center he learned was for deportees. The case was decided 6-2 with Justices Samuel Alito and Clarence Thomas dissenting; it was heard before Justice Neil Gorsuch joined the court.

Avoiding deportation was the chief concern of Lee, 48, who was 13 when he came with his parents to the U.S. from South Korea. He has no ties to his birth country. He has been in a state prison for more than seven years while the case worked its way through the court system.

Wendy Uruchi Contreras, a Spanish national living in Virginia, was deported in January of this year despite newspaper profiles and rallies held outside federal facilities on her behalf. In 2016, she was arrested for drunk driving on Memorial Day weekend. Under Obama administration guidelines, her drunken-driving conviction made her a priority for deportation.

Because Uruchi entered the United States under a visa waiver, she was not entitled to see an immigration judge. She met and later married a man from Bolivia also without legal documentation; they have two children, one now a teenager.

ICE raids early in his presidency gave Barack Obama the sobriquet “deporter in chief” by immigration advocates. But Obama’s successor as president, Donald Trump, seems intent on erasing some Obama-era policies that gave a degree of protection to some immigrants in the country illegally.

Maribel Trujillo Diaz, a Mexican national with a work permit who had been living in the Cincinnati suburb of Fairfield, was the beneficiary of one of those Obama-era policies: deferred action. In the United States since 2002, citing fear of Mexican drug gangs, she was swept up in a 2007 federal raid at a food processing plant in Fairfield. She had exhausted all of her appeals in 2014.

“She was considered such a low-level threat, they considered her not a threat at all,” Tony Stieritz, director of social action for the Archdiocese of Cincinnati, told Catholic News Service. “We basically all breathed a sigh of relief.”

But then came the presidential election, and “we knew the Trump administration was removing those priorities,” Stieritz said. “Maribel had no immigration-related offense at all,” he added. “She was an easy target. She had a final order of removal, but she had an outstanding asylum plea. While her lawyers were still working on the asylum plea, that made her an easy target.” She was deported in April.

Because of the asylum case, “there’s still a small glimmer of hope that we can bring her back. We don’t know where that’s going to go and how long that’s going to take,” he told CNS.

Meanwhile, Trujillo has a 4-year-old daughter who suffers from frequent seizures — and now a missing mommy. “The family tells her that her mom is on a long vacation. Thankfully they can Skype and talk,” Stieritz told CNS. “I don’t know if she (the daughter) still does this, but she makes her mom’s bed for when she comes home.”

In New Mexico, a Catholic facility is providing sanctuary to an unauthorized immigrant, Jorge Taborda, who has been staying at the Holy Cross Retreat Center in Mesilla Park, near Las Cruces, where he has been given permission to stay indefinitely.

Taborda, now a computer technician, his wife and young son Jefferson arrived in Miami in 1998, fleeing Colombia’s drug violence. They made their way to Las Cruces and made a life for themselves, and had a second son, Steven.

Taborda’s wife, Francia Elena Benitez-Castano, and Jefferson were detained by ICE agents May 8. Jefferson, who graduated from college last year, was released after three days, as he qualifies to remain under the Deferred Action for Childhood Arrivals program, another Obama-era initiative Trump has kept in place. Benitez-Castano was deported a month after being apprehended.

“I’m here praying to the Lord for his mercy on us,” Taborda told the Las Cruces Sun-News after a Mass at the retreat center. “But (I’m) also asking for the community — for our bishop, for our church, for our friends — to ask the government of the United States (for) one pardon, one stay, one give to my family, especially to my wife (and) to my kids.”

NEXT: Joy, a sign of God’s presence, is what church needs, Cardinal Dolan says