Joy, a sign of God’s presence, is what church needs, Cardinal Dolan says 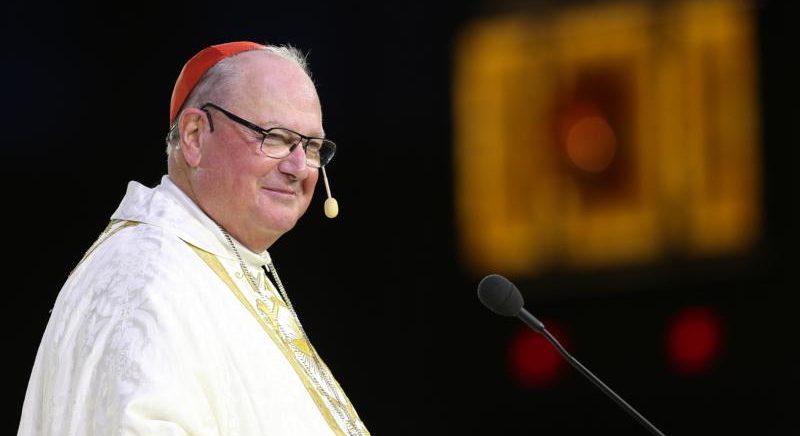 Cardinal Timothy M. Dolan of New York smiles as he delivers the homily during the opening Mass of the “Convocation of Catholic Leaders: The Joy of the Gospel in America” July 1 in Orlando, Fla. Leaders from dioceses and various Catholic organizations are gathering for the July 1-4 convocation. (CNS photo/Bob Roller)

ORLANDO, Fla. (CNS) — Catholic leaders attending the opening Mass of the “Convocation of Catholic Leaders: The Joy of The Gospel in America” were urged to reflect joy — a sign of God’s presence — and not exclusively focus on the world’s problems.

“A big part of the reason behind this promising convocation, folks, is that we, your pastors, believe with Pope Francis, that a renewal of joy is essential for a deepening of Catholic vitality and confidence today,” said New York Cardinal Timothy M. Dolan, homilist at the July 1 Mass.

The hotel ballroom in Orlando was transformed into a spacious church for the congregation of about 3,500 delegates — invited from dioceses around the country — who were urged to view their time at the four-day convocation as a journey, not just a conference, by Dallas Bishop Edward J. Burns in remarks before Mass.

The Mass was concelebrated by 150 bishops. Readings were in Spanish and English and prayers of the faithful were delivered in several languages. A gospel choir from St. Peter Claver Parish in Tampa, Florida, led the delegates in song.

Cardinal Dolan emphasized that during the gathering people would come to know each other better and also get to know Jesus more, which would be make them effective and joyful in their mission of spreading the Gospel message.

He said this renewal of joy was especially needed at this moment in the church.

Catholics, the cardinal said, can be tempted to “concentrate on problems, worries, bad news, scandals (and) darkness” which he said can’t be ignored but also shouldn’t dominate people’s lives.

“We can’t become, in the folksy term of Pope Francis, ‘a church of sourpusses,'” he added.

Cardinal Dolan also noted that the convocation was starting on the feast of St. Junipero Serra, who started the Franciscan missions known for education, health care and evangelization, but also for joy, which is why people came to the new churches and stayed.

“People may claim they do not want faith, hope or love,” he said, but “rare is the person who does not crave joy.”

The crowd was already in good cheer, laughing about references to nearby Disney World and other theme parks before Mass began.

Orlando Bishop John G. Noonan asked Cardinal Dolan where he was going after the event and the cardinal replied: “Disney World!” repeating the answer given by many Super Bowl athletes.

Clearly looking for another answer, the bishop turned to the crowd and asked them the same question and they responded, “Heaven!”

“How are we going to get there?” the bishop asked before answering his own question that they would figure out the answer during their time at the convocation and when they returned to their parishes with renewed hope.

Bishop Noonan said the cardinal called him five years ago and said he’d like to come to Orlando in July. “He just didn’t say how many he invited!” the bishop joked.

Another message delivered to the delegates before Mass was from Cardinal Pietro Parolin, Vatican secretary of state, read aloud by Archbishop Christophe Pierre, apostolic nuncio. The message said Pope Francis hoped the days of dialogue and prayer for the delegates would enable them to return to their Catholic communities and “read the signs of the times joyfully” and follow God’s call to be missionary disciples.

The message also said the Holy Father hopes the convocation would “stir up enthusiasm” at every level for encountering Jesus and proclaiming his message of reconciliation and peace.

The delegates did not seem short of joy, greeting one another before and after the Mass and laughing along with Cardinal Dolan in the opening words in his homily when he said he hadn’t seen this many priests and bishops since the last Notre Dame football game.