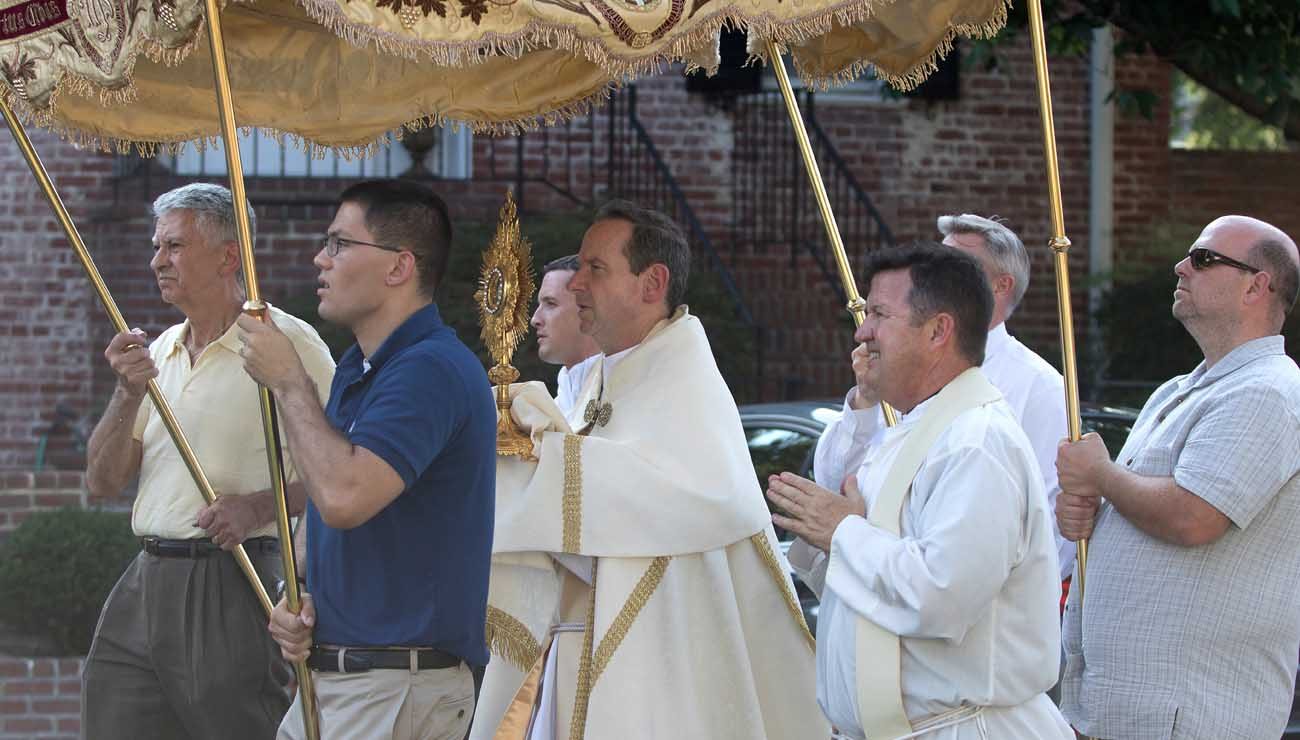 Bishop Michael F. Burbidge of Arlington, Va., carries a monstrance as he leads a Corpus Christi procession June 18 outside St. Mary's Church in Alexandria. During Mass, Bishop Burbbidge offered special prayers for peace and unity within the community. The liturgy folled days after a June 14 attack on members of the Republican congressional baseball team in Alexandria. (CNS photo/Joe Cashwell, Arlington Catholic Herald)

ALEXANDRIA, Va. (CNS) — Arlington Bishop Michael F. Burbidge celebrated Mass and led a eucharistic procession at St. Mary Church in Alexandria June 18 to “bring Jesus, the source of our peace and unity, into the streets” recently touched by violence.

The Mass was celebrated on the feast of Corpus Christi, just days after a shooting at an Alexandria ballpark in which Rep. Steve Scalise, R-Louisiana, and others were injured while practicing for a charity baseball game.

In his homily, the bishop said that the seven-block procession from St. Mary’s Church to St. Mary’s Cemetery was a witness to the world that “we do not walk through this life alone.” He reminded parishioners that unity depends on recognizing the dignity of each and every person by listening to others, discussing points of disagreement in a civil manner and letting go of bitterness.

The bishop urged elected officials to take the lead in working for that unity.

“Today, with the faithful in the Diocese of Arlington and all people of goodwill, I respectfully make a plea to all our elected officials to reflect the unity for which we long,” Bishop Burbidge said. “We need you to work together for the common good; to uphold truth, peace and justice; to find common ground; to be respectful of each other even in the midst of debate; and to let go of harsh words and severe rhetoric.

“We also hope and pray that all in the media will do the same,” he continued. “Imagine how different the world and our nation would be if our motto was the words of St. Paul: ‘Let us make our aim to work for peace and to strengthen one another.'”

As of early June 19, Scalise remained in serious condition at MedStar Washington Hospital Center. Over the June 17-18 weekend, he was upgraded from serious condition. He has undergone several surgeries since he took a bullet to the hip early in the morning of June 14 while at a baseball practice in Alexandria, Virginia. Doctors said the bullet fractured bones, injured internal organs and caused severe bleeding.

Four others also were injured in the shooting spree which came as GOP members of the House practiced baseball for a June 16 charity game against Democrats. The other victims included two Capitol police officers who were on Scalise’s protective detail, a congressional staffer and a lobbyist. The gunman, now identified as James Hodgkinson, was shot by police and died of his wounds.

Stachyra Lopez is social media coordinator for the Arlington Catholic Herald, newspaper of the Diocese of Arlington.

NEXT: Chaldeans protest ICE detentions outside federal building in Detroit