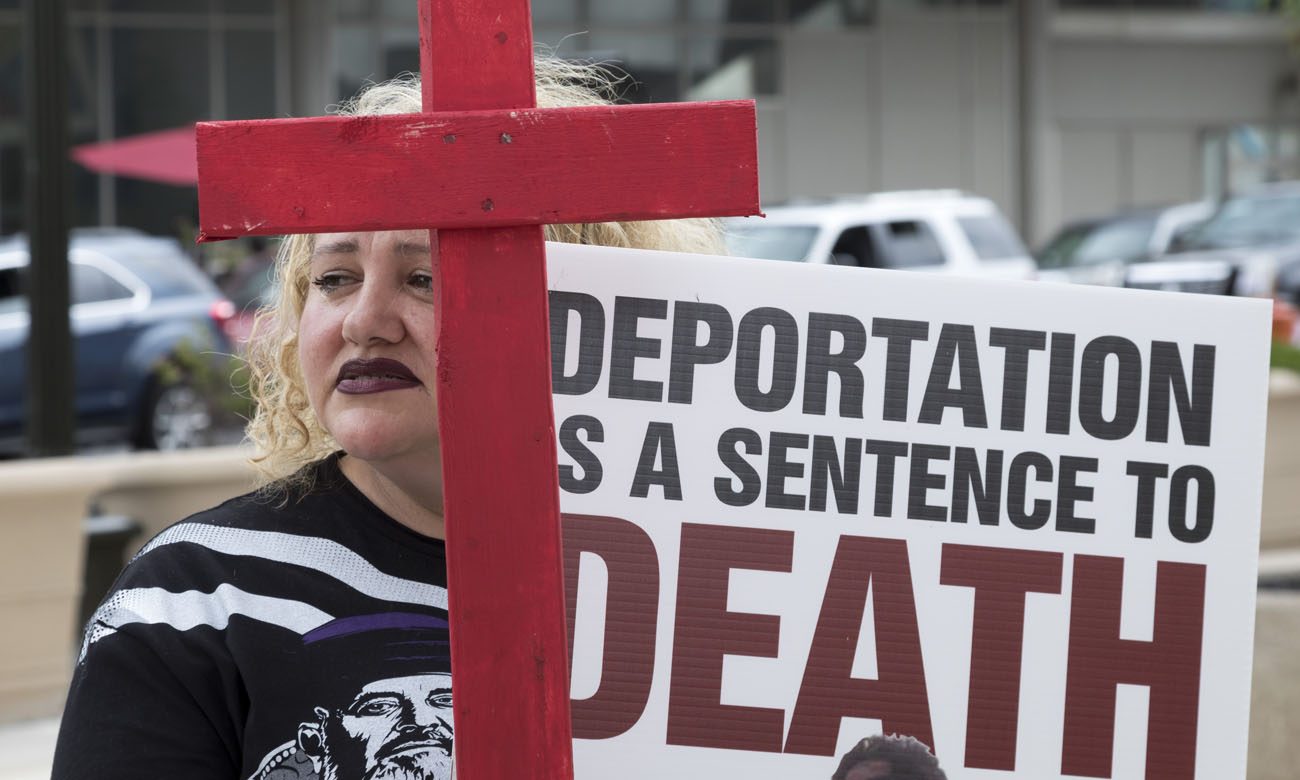 A woman holds a sign and cross as members of the local Chaldean community demonstrate June 16 outside the Patrick V. McNamara Federal Building to protest the arrest and detention of more than 100 Chaldean Christians from the Detroit area. (CNS photo/Jim West)

UPDATED – DETROIT (CNS) — The organizer of a June 16 protest in Detroit against federal agents’ rounding up more than 100 Iraqi-American immigrants told local media that those who were detained had no prior warning that Immigration and Customs Enforcement would be arresting them the morning of June 11.

Joined by U.S. Democratic Reps. Sander Levin and Brenda Lawrence of Michigan, members of the Chaldean Christian community gathered in front of the Patrick V. McNamara Federal Building. They held up signs, crosses and American flags, venting their frustration against federal authorities who detained their father, brothers and uncles, many of whom have been in the community for decades.

Late June 20, the U.S. Conference of Catholic Bishops in Washington released a letter that conference officials sent to Homeland Security Secretary John Kelly, urging him from a moral perspective to defer deportation of the individuals apprehended by ICE, particularly Christians and Chaldean Catholics, “who pose no threat to U.S. public safety” and would be sent back to a region where the persecution of religious minorities continues.

Acknowledging that some of those apprehended may have orders of deportation because they have committed criminal offenses in the past, they still expressed grave concerned they would then be sent back to a country where religious persecution and persecution against ethnic minorities remains an ongoing threat.

“The fact that they have a significant risk in experiencing persecution, and even possible bodily harm because of their faith is, from our moral perspective, an important factor to be weighted in the calculation to deport,” the letter said.

In Detroit, the demonstration was organized by Martin Manna, president of the Chaldean Chamber of Commerce.

“I represent a rich cove of the Iraqi-Chaldean community, and when I called Martin Manna, I got here quickly,” Lawrence said. “Chaldeans are our friends, our neighbors.

“Why did ICE decide to target and round up Iraqi-Americans? Where is the written policy?” Lawrence asked, referring to the “verbal agreement” U.S. President Donald Trump had with the Iraqi government regarding accepting deportees from the United States.

Levin and five others from the Michigan delegation to the U.S. House of Representatives wrote a letter to Secretary Kelly, requesting a copy of the U.S. government’s agreement with Iraq so it can be subject to congressional oversight and to hold off on sending the detainees to Iraq until their safety can be guaranteed.

“We are here on behalf of the Chaldean community, proclaiming this as not only a Chaldean issue, but an American issue,” Levin said. “We’re saying to ICE, let there be time for justice. Sec. Kelly said, ‘we’re only going after the ‘worst of the worst.’ There arrests have been made without regard to what crime has been committed, or what sentences have already been served.

“This is a country that believes in due process for everybody, even for immigrants,” he continued. “America is more than just numbers, but the human lives behind them. I ask my colleagues, delay deportation. We’re here together for the Chaldean community.”

Family members of those who have been detained shared their stories, stating how many were preparing to attend Sunday Mass when ICE officials knocked on their doors, asking to go with them to the Iraqi Consulate; some were promised they would be returned to their homes.

“We’ve heard stories of an 80-year old man, who was carried away by ICE (Immigration and Customs Enforcement) in chains,” said Nidal Zawaideh of Bloomfield Hills, who showed up to protest to support her fellow Chaldeans. “They talk about the crimes they’ve committed. This man hit his wife 50 years ago, had the police called. But that was 50 years ago; these people are not a threat to society.”

After the roundup, ICE officials would not confirm the number taken into custody but said those arrested had criminal convictions, including for murder, rape, assault, burglary, weapons violations and drug trafficking. They said the action was the result of recent negotiations between the U.S. and Iraq, which had agreed “to take back Iraqi nationals convicted of crimes.”

WJBK-TV reported that an ICE spokesperson said that “each of these individuals received full and fair immigration proceedings, after which a federal immigration judge found them ineligible for any form of relief under U.S. law and ordered them removed.”

Father Anthony Kathawa, parochial vicar of St. Thomas Chaldean Catholic Church in West Bloomfield, said many in the parish and surrounding Chaldean parishes have called, asking for help and not receiving many answers.

“There is a lot of pain, confusion, with them asking questions and getting now answers,” Father Kathawa told The Michigan Catholic, newspaper of the Detroit Archdiocese. “We have to lean on our faith, because there are so many questions.”

He said that Bishop Francis Y. Kalabat, who heads the Chaldean Catholic Eparchy of St. Thomas the Apostle, based in Southfield, “has requested every parish celebrate a special Mass and maintain a Holy Hour at every Chaldean parish in the area.”

Father Kathawa couldn’t confirm how many of his parishioners have been detained, saying there have been many.

“The people that are detained … I never guessed they’d have a criminal background,” Father Kathawa said. “They are really involved in their parishes; they’ve brought great change to the community. Those who were convicted of crimes, they’ve paid their debt. Part of Christianity is believing in redemption, believing in forgiveness.”

NEXT: Catholic church leaders call for dialogue between the U.S. and Cuba