Bishop says world must move past indifference to solidarity with refugees 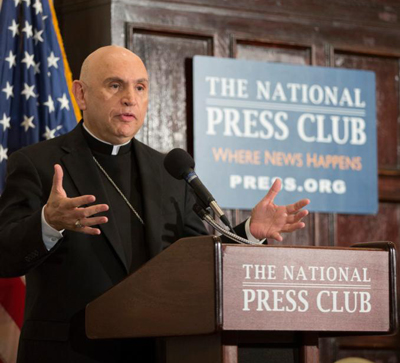 Auxiliary Bishop Mario E. Dorsonville of Washington speaks about the situation of the world’s refugees June 19 at the National Press Club in Washington. The event, held a day before World Refugee Day, was hosted by the U.S. Conference of Catholic Bishops’ Migration and Refugee Services. (CNS photo/Jaclyn Lippelmann, Catholic Standard)

WASHINGTON (CNS) — It is important the world move from indifference about the plight of the world’s refugees to solidarity with them, Auxiliary Bishop Mario E. Dorsonville of Washington said June 19.

He made the comments at the National Press Club during an event held a day ahead of World Refugee Day and hosted by the U.S. Conference of Catholic Bishops’ Migration and Refugee Services.

With 22.5 million refugees worldwide, Bishop Dorsonville noted, “the size and scope of the problem might beckon us to give up and question our work,” but it is “important that we not throw our hands up in despair and retreat to the quiet of our homes … and in doing so ignore the tragedy of the global displacement.”

Bishop Dorsonville noted that refugees are made in the image of God, and are children, husbands, wives, young and old, rich and poor.

“Each one has a story to tell … if they are only given the opportunity to do so,” he told the government, church and nonprofit leaders gathered at the press club. “It is for the child who cries itself to sleep in the shadows of a refugee camp who we seek to bring justice … who our advocacy, prayers and good intention intend to support.”

By assisting just one refugee, “we can take confidence in the fact we have responded to Jesus’ commandment to welcome the stranger, feed the hungry, and clothe the naked,” Bishop Dorsonville added.

Bishop Dorsonville, who himself is an immigrant from Colombia, recalled the difficulty of saying goodbye to his homeland and people. Nevertheless, he said he is grateful to be in this country and for the people who welcomed him and showed him a “culture of love.”

“I was thirsty and I found someone who gave me something to drink,” he said. “I have seen so many thirsty faces that remind me of myself and in them I see Jesus.”

Refugees often face trauma when being forced from their homes and into urban camps with lots of exploitation, Bishop Dorsonville noted, and “it is our moral obligation and responsibility to assist people who find themselves in such situations.”

The Catholic Church teaches that individuals have a right to migrate and live in their own countries in a way that sustains family life, said Bishop Dorsonville. The USCCB has assisted more than 1 million refugees in resettling in the United States.

“A refugee is not a criminal … a refugee is a son or daughter of God,” said Bishop Dorsonville, adding, “A refugee is God’s smile to the world,” because of the love and hope for the future that they bring.

The bishop spoke as part of a panel on “Refugee Protection in Global Context.” Other speakers included Chiara Cardoletti-Carroll, deputy regional representative of the Office of the U.N. High Commissioner for Refugees for the U.S. and Caribbean; Msgr. Robert Vitillo, secretary-general of the International Catholic Migration Commission and former executive director of the U.S. bishops’ Catholic Campaign for Human Development; and Dr. Shahla Amiri, a medical doctor who moved to the United States from Kabul, Afghanistan, just a month and a half ago.

Introducing the first panel, Bill O’Keefe, vice president for government relations and advocacy at Catholic Relief Services, noted that there are currently 65 million displaced people in the world, and the average refugee is a refugee for 25 years, making it almost a permanent status.

“Refugees and displaced people are people, not problems; assets, not burdens … invitations to grace and gratefulness, not to fear,” he said.

In addition to the well-known refugee crisis resulting from the civil war in Syria, O’Keefe noted several other areas where conflict or hunger are forcing people to flee their homes, such as South Sudan, Somalia, Yemen, and Nigeria. While he thinks our country has an obligation to continue providing humanitarian assistance, he noted that this is not enough to solve the conflicts, and “the government must work to find political solutions” to prevent others from fleeing and allow people to go home.

“We need durable solutions so they can become the people God intended them to be,” said O’Keefe.

Amiri came to the United States through a special immigrant visa, for which she qualified through her work with the U.S. Agency for International Development. As a woman who had spent many years working to promote policies that help vulnerable populations in Afghanistan and to empower women and children, she was frequently receiving threats against her life, and said she left her office every day worried about her safety.

She said she has seen great progress in Afghanistan in recent years, which she said was largely helped by the presence of the United States and the international community, but there is “still a long way ahead.”

Following the panel, Garry Hall, the special assistant to the president and senior director for international organizations and alliances, spoke about his job of advising the president on matters related to refugees.

“Our national values are all about human rights. Those values are a compass that always points in the right direction,” he said.

In giving policy suggestions to the president, he said, he has to balance those values with security concerns, because “every strategy as a humanitarian component and every humanitarian action has strategic implications.”

Some data he mentioned that he uses to inform his policy suggestions include that 87 percent of refugees are fully employed and off of government subsistence within six months of arriving in the United States, and since 1980, there has not been one injury or threat by the 3.1 million refugees who have been resettled here.

Hall asked everyone to pray for him and invited anyone to visit his office, since “the more I’m educated, the more I can educate others,” he said.