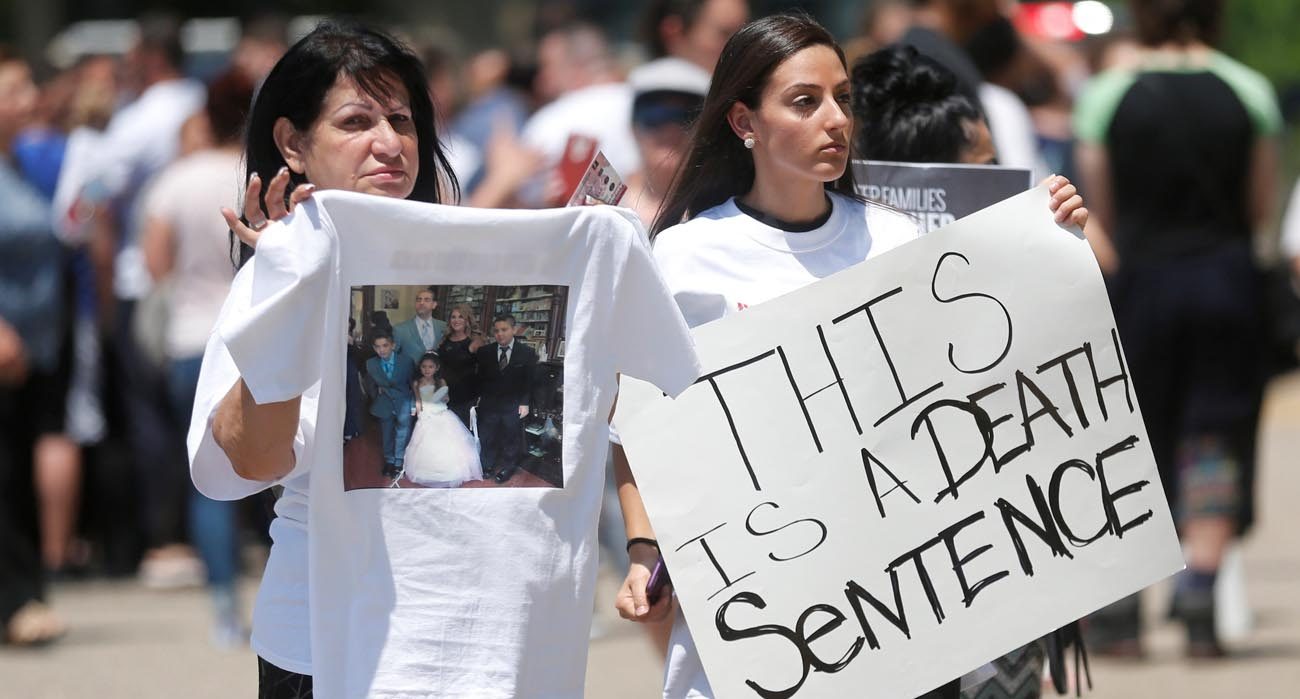 Chaldean-Americans protest June 12 outside Mother of God Chaldean Catholic Church in Southfield, Mich., after dozens of Chaldean Christians were arrested by federal immigration officials over the weekend of June 10 and 11 in the Detroit metropolitan area. (CNS photo/Rebecca Cook, Reuters)

WASHINGTON (CNS) — The president of the U.S. Conference of Catholic Bishops and the chairmen of the bishops’ migration and international policy committees urged Secretary of Homeland Security John Kelly to defer deportation of Chaldean Christians and others arrested June 11.

They made the comments in a letter to Kelly in response to the apprehension of Iraqis in the Detroit area and near Nashville, Tennessee, by U.S. Immigration and Customs Enforcement. More than 100 were arrested, including Chaldean Christians and Shiite Muslims. There were placed in federal custody in Youngstown, Ohio, and faced deportation June 21.

“Returning religious minorities to Iraq at this time, without specific plans for protection, does not appear consistent with our concerns about genocide and persecution of Christians in Iraq,” the bishops wrote.

“We strongly encourage you to exercise the discretion available to you under law,” they continued, “to defer the deportation of persons to Iraq, particularly Christians and Chaldean Catholics, who pose no threat to U.S. public safety, until such time as the situation in Iraq stabilizes and its government proves willing and capable of protecting the rights of religious minorities.”

The Office of Public Affairs at the Department for Homeland Security and at ICE Public Affairs did not respond immediately June 21 to a request for comment from Catholic News Service.

After the ICE action June 11, officials with the agency would not officially confirm the number of people taken into custody but said those arrested had criminal convictions, including for murder, rape, assault, burglary, weapons violations and drug trafficking. In a news release, the agency said the action was the result of recent negotiations between the U.S. and Iraq, which had agreed “to take back Iraqi nationals convicted of crimes.”

WJBK-TV in Detroit reported that an ICE spokesperson said that “each of these individuals received full and fair immigration proceedings, after which a federal immigration judge found them ineligible for any form of relief under U.S. law and ordered them removed.”

Cardinal DiNardo and Bishops Cantu and Vasquez acknowledged that some of those apprehended may have orders of deportation because they have committed criminal offenses in the past, but they still expressed grave concern they would then be sent back to a country where religious persecution and persecution against ethnic minorities remains an ongoing threat.

“We do not minimize the serious criminal offenses of which some of these individuals have been convicted; it is entirely appropriate that they be punished for their offenses. After serving their sentences, however, we believe it would not be just or humane to deport a person who has integrated into American life and poses no evident risk to the local community,” the bishops said.

“The fact that they have a significant risk in experiencing persecution, and even possible bodily harm because of their faith is, from our moral perspective, an important factor to be weighed in the calculation to deport,” they said.

“For decades, many of these Christians sought legal refuge in the United States. Like other refugees from various countries of origins, they have become integrated into American communities, and in this instance, they are contributing members of communities in Michigan and Tennessee,” they wrote.

The American Civil Liberties Union filed a class-action lawsuit against ICE June 15. The complaint was filed by seven individuals on behalf of themselves and all those similarly situated.

“U.S. law prohibits the removal of individuals to countries where they would face a likelihood of persecution or torture,” petitioners wrote in the complaint. “For example, many of the petitioners are Chaldean Christians, who are widely recognized as targets of brutal persecution in Iraq.”

PREVIOUS: Bishop says world must move past indifference to solidarity with refugees