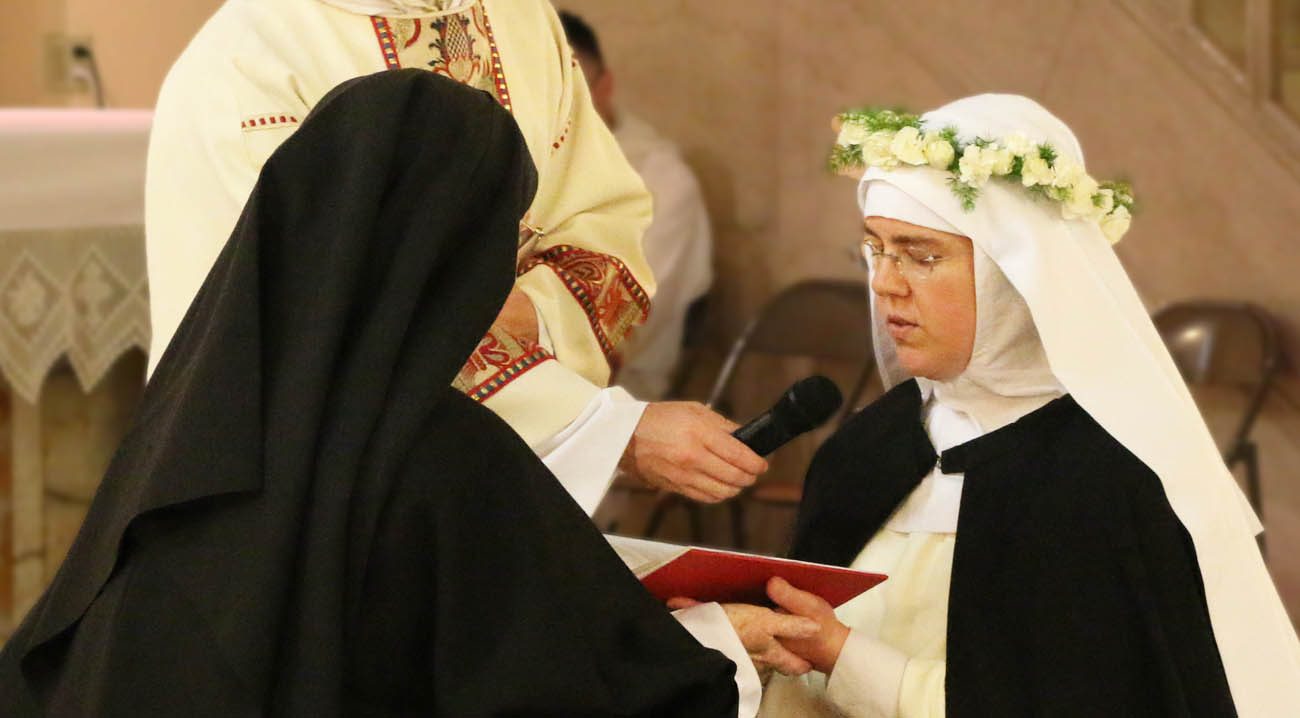 MENLO PARK, Calif. (CNS) — Tara Clemens was an Anchorage, Alaska, attorney, and an evangelical Christian who joined the Catholic Church during her last months of law school.

On May 28, she made first vows as Sister Marie Dominic of the Incarnate Word, a cloistered Dominican nun at Corpus Christi Monastery in Menlo Park.

“The priest says, ‘Accept the sacred veil by which you may be recognized as a house of prayer for your Lord and a temple of intercession for all people,'” Sister Marie Dominic said. “The center of the contemplative life of the Dominican nuns is the love of God.

“As a nun inside the cloister, even though I can never leave, I can embrace the whole world with that love and intercede for the whole world,” Sister Marie Dominic told Catholic San Francisco, the archdiocesan newspaper.

First vows are for three years. Those vows will be followed by two one-year renewals as she and the community continue to discern her vocation. At Corpus Christi Monastery, a nun is in formation for a total of seven-and-a-half to eight years before professing solemn vows, that is, vows until death.

Sister Marie Dominic already has spent two-and-half years in the monastery, first as a postulant and then as a novice. Dominican friars and nuns profess the vow of obedience to God, Mary, St. Dominic, the master of the Order of Friars Preachers, and for the nuns, to the prioress and her successors. Vows of chastity and poverty are included.

It was a sudden change to Catholicism and a relatively quick decision to discern a vocation to the Dominican Monastery of Corpus Christi that caught Clemens by surprise. A visit to a Friday Lenten Mass with a friend during her last months of study at Lewis and Clark Law School in Portland, Oregon, led to three months of studying of Catholicism late at night. She also was working full time. By Pentecost 2007, a few months later, she was convicted of the truth of Catholicism.

In Anchorage, she was asked out of the blue about becoming a nun. She responded she had never considered the idea. By November 2008, just months after entering the church at the Easter Vigil, the young attorney was visiting Corpus Christi Monastery.

But with more than $100,000 of student loans, the nun-to-be was at times close to despairing because she could not enter with outstanding debt. So the story of her vocation journey also is the story of how the Laboure Society helped Clemens resolve her student loans and become Sister Marie Dominic.

“She has a dear place in my heart,” said John Flanagan, the society’s executive director.

The Laboure Society, based in Minnesota, assists those with a priestly or religious vocation resolve their debt, which can be an obstacle to entering religious life. The society enrolls a “class” of a dozen to 25 people who believe they have a religious vocation and puts them through a fundraising “boot camp.” The aspirants raise funds for their class, not for themselves. For Clemens, she participated in the program for two years. At the end of her last class, it looked like she would be in for another year until two benefactors made large contributions.

“People all around the country know they have done something to help Tara Clemens become Sister Marie Dominic. She didn’t get there alone,” Flanagan said.

And Flanagan said Sister Marie Dominic has not forgotten any of those people. “She has a gift of gratitude,” he said.

“She inspired the heck out of me,” Flanagan added. “She had her own difficulties in her journey but she faced them with great trust in the Lord.”

NEXT: Pope Francis names bishop of Evansville as archbishop of Indianapolis