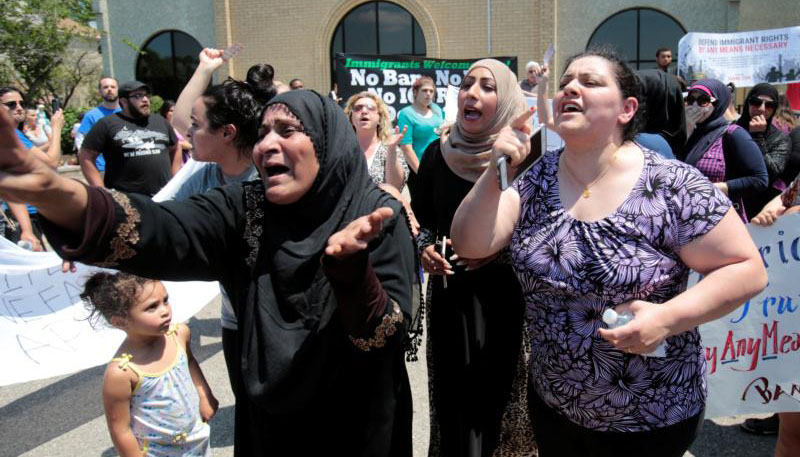 Women react as they talk about family members who were arrested by immigration officials during a June 12 rally outside the Mother of God Chaldean Catholic Church in Southfield, Mich. Dozens of Chaldean Christians were arrested by federal immigration officials over the weekend of June 10 and 11 in the Detroit metropolitan area, which members of the local church community said left them feeling sad and frustrated. (CNS photo/Rebecca Cook, Reuters)

SOUTHFIELD, Mich. (CNS) — When U.S. immigration agents rounded up and arrested Chaldean Christians in southeast Michigan June 11, it was “a very strange and painful day for our community in America,” said the head of the Chaldean Catholic Eparchy of St. Thomas the Apostle, based in Southfield.

“With the many Chaldeans that were awakened by Immigration Customs Enforcement agents and consequently picked up for deportation, there is a lot of confusion and anger,” Bishop Francis Y. Kalabat said in a statement posted on the eparchy’s website.

News reports said about 40 people were arrested near or at their homes and were put on buses June 12 to be taken to a federal detention center in Youngstown, Ohio. The same day, a rally outside the Mother of God Chaldean Catholic Church in Southfield drew dozens of people, many of whom said the federal government’s actions had left them sad and frustrated.

In his statement, Bishop Kalabat said the eparchy was contacting and working with “many agencies to try to stop this bleeding,” including the U.S. State Department, members of Congress, the Iraqi Embassy, the U.S. Conference of Catholic Bishops and “any agency that could file an injunction to keep anyone from being deported.”

In talking with various agencies, the bishop said, Catholic officials are emphasizing that “the church does not oppose justice. All hardened criminals that are a danger to society should be picked up.” But, he continued, “many who were picked up are not hardened criminals but for the last decades have been great citizens.”

In a statement, ICE officials would not confirm the number taken into custody but said those arrested had criminal convictions, including for murder, rape, assault, burglary, weapons violations and drug trafficking.

WJBK-TV reported that an ICE spokesperson said that “each of these individuals received full and fair immigration proceedings, after which a federal immigration judge found them ineligible for any form of relief under U.S. law and ordered them removed.”

The official also said the action was the result of recent negotiations between the U.S. and Iraq, which had agreed “to take back Iraqi nationals convicted of crimes.”

A bill passed by the U.S. House June 6 “to protect Christians,” Bishop Kalabat said, “goes against this very thing.” He was referring to the bipartisan Iraq and Syria Genocide Emergency Relief and Accountability Act that would provide humanitarian assistance to Christian and other religious minorities suffering genocide at the hands of Islamic State militants.

The bishop acknowledged it “will take a lot of effort” to work on behalf of those who have been taken into custody, “but acting in disrespectful ways in front of the federal building (will) only bring harm and not good.”

“We understand the pain that many members of our community are going through but emotional outbursts will not bring change,” he said, and urged them to get official statements from the eparchy about efforts being made on behalf of the detainees. He added: “Let’s pray for God’s blessings to rain down on us.”