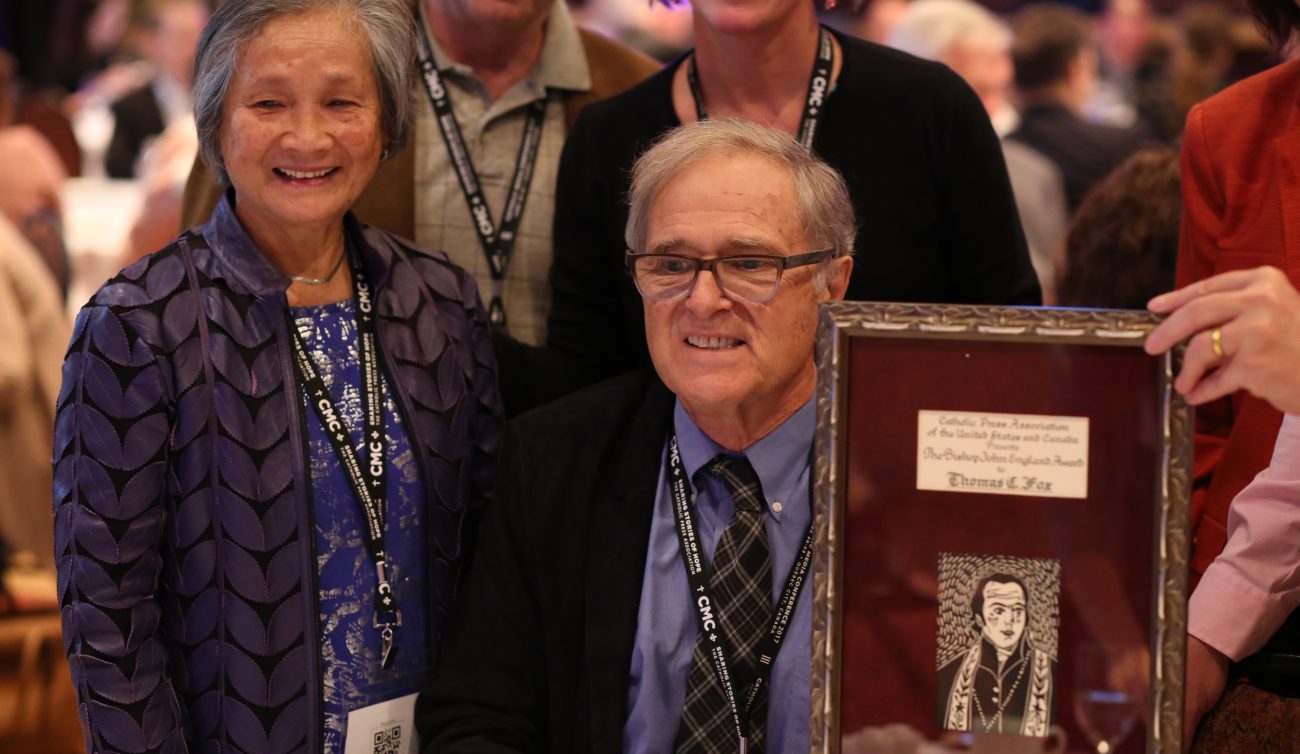 QUEBEC CITY (CNS) — Thomas C. Fox, former publisher of National Catholic Reporter who started his journalism career as a correspondent while working with displaced Vietnamese in the 1960s, was given the Catholic Press Association’s Bishop John England Award for publishers who defend their publication’s First Amendment rights.

“Allow me to receive this award on behalf of the entire NCR staff, past and present,” said Fox, who retired in 2016 after 36 years as publisher of the lay-run national newspaper based in Kansas City, Missouri. He said the paper “allows a forum for voices that otherwise would not be heard.”

Bishop England founded the nation’s first Catholic newspaper, The Catholic Miscellany, in South Carolina in the 19th century. He also was outspoken against slavery.

“I like to think that if Bishop England were here today … he would be proud of NCR,” Fox said at a June 22 luncheon during the 2017 Catholic Media Conference in Quebec City.

“I like to think the NCR Catholic lay voice … has remained faithful to its founding mission, even today,” he said.

Fox said the newspaper had its supporters and detractors over the years, and there was “a cost to the kind of journalism” NCR had been called to do.

The paper has been called “biased, outrageous and even blasphemous,” he said. When the paper began reporting on liberation theology decades ago, it was called communist. When it first began reporting on the clergy sex abuse scandal, “we were told we were tearing down the church.”

The Catholic Press Association bio of Fox, taken from a nomination letter, noted: “At the time of Fox’s retirement, ‘Spotlight,’ the film about the clergy sex abuse scandal in Boston, was very much in the news. I have wondered how many people know of NCR’s and Tom Fox’s role in bringing the scandal of that crisis to light some 15 years before The Boston Globe wrote its stories. Under Fox’s leadership, NCR has been on that beat for more than 30 years.

“Fox was determined to report the story of the abuse of children by clergy, and he saw his first duty to tell the truth of the victims,” the letter continued. “To do this meant enduring a hostile director of the NCR board, readers who canceled subscriptions and institutional leaders who ridiculed or dismissed NCR’s coverage. Fox’s stand is a proud moment in freedom of the Catholic press.

“By keeping NCR focused, Fox made the newspaper relevant, welcome and well-read,” it said.

Fox told his audience that “journalism has always been a sacred mission to me.”

He said the Second Vatican Council and the Vietnam War — “fresh air and stifling heat” — were two events that shaped his life as he was graduating from Stanford University in 1966, “just months before Buddhist monks were immolating themselves on Saigon streets.”

He traveled to Vietnam as a volunteer, working with displaced farmers living in camps near Vietnam’s beaches. His job was to help “in any way I could.”

When he once asked some of the displaced what he could do to help, he said they replied: “Tell your people what is happening to us. Tell them our stories.”

About that time, he was referred to Robert Hoyt, founder of National Catholic Reporter, who quickly dubbed him Vietnam correspondent.

“My writing was awful. Hoyt’s editing was superb,” he said, adding that he learned from his editor.

Past presidents of the Catholic Press Association voted on the award. Although publishers often are bishops or priests, in four other years laypeople won the award. The 2016 recipient was Greg Erlandson, now director and editor-in-chief of Catholic News Service, who won as publisher of Our Sunday Visitor.

NEXT: Catholics urged to work for ‘holiness of freedom, freedom for holiness’