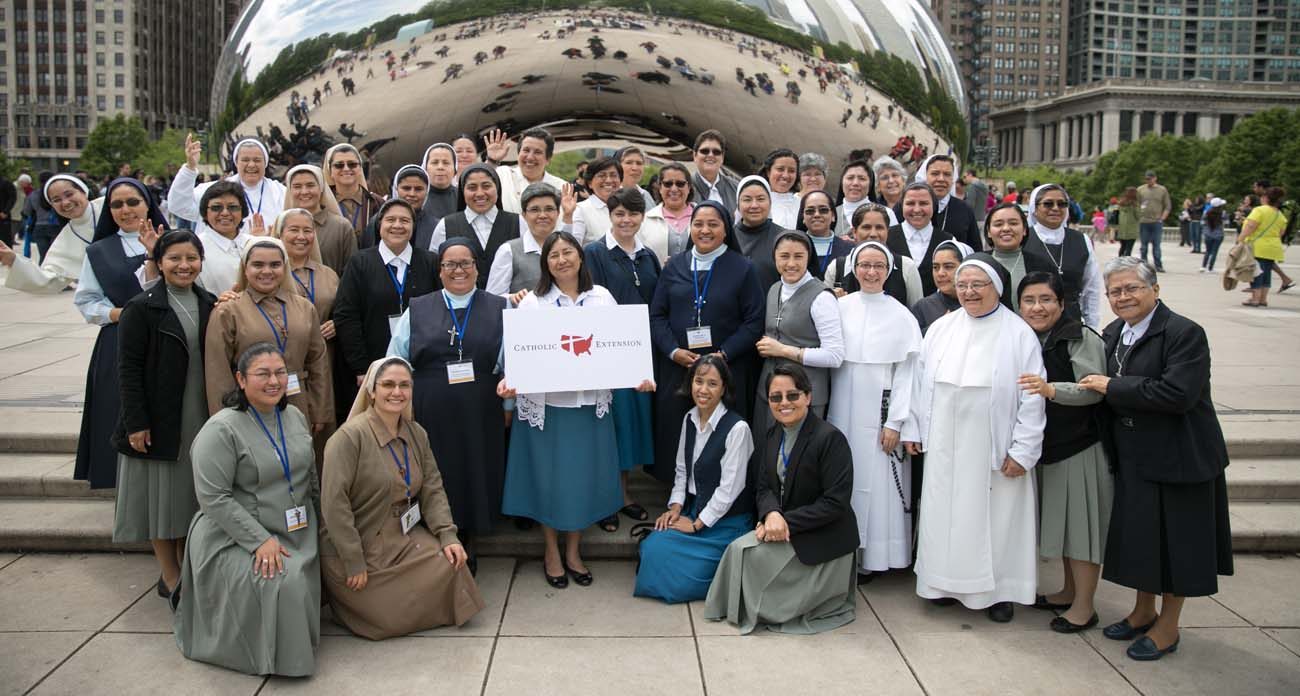 CHICAGO (CNS) — Thirty-four Latin American sisters who are working as missionaries in poor Latino communities in the United States recently gathered for a 10-day retreat and meeting in Chicago.

They were joined by their mother superiors and, for a vocation retreat over the final weekend, by 20 young Latinas interested in learning more about religious life.

The sisters are currently in their third year of this five-year initiative, designed to strengthen Catholic ministries to immigrant communities, promote vocations among Latino Catholics and develop greater Hispanic leadership in the U.S. Catholic Church.

For the participating sisters from Latin America, the program offers pastoral experiences as well as educational programming that is preparing them for greater leadership in their religious congregations.

The May 19-28 Chicago encounter included a retreat for the sisters and their mother superiors at the Cenacle Retreat Center; a vocation retreat, also at the Cenacle; a workshop at Loyola University Chicago; meetings with Chicago Cardinal Blase J. Cupich, Catholic Extension staff and the director of the Hilton Foundation’s Catholic Sisters Program; as well as visits to several Chicago parishes, including a “Sisters’ Serenade” at St. Teresa of Avila Parish.

Fun agenda items included attending a Chicago Cubs game and taking in some sights of Chicago, where Catholic Extension is based. The organization is the leading supporter of missionary work in poor and remote parts of the United States. Extension’s hashtag #SistersintheCity accompanied those outings.

Welcoming the sisters to Chicago, Cardinal Cupich addressed them in Spanish during a meeting in the Chicago Archdiocese’s St. James Chapel. The cardinal blessed them and thanked them for their great gift to the U.S. church.

Catholic Extension said that as its chancellor, Cardinal Cupich has been instrumental in developing and guiding the program.

He asked a “special favor” of the sisters: “When you meet our immigrant brothers and sisters throughout the country, please share this message with them from me: Tell them that God is with them in this challenging time and that the church will never stop advocating for them. Tell them that their culture and language are beautiful and that they enrich us. And tell them that I will pray to our Mother Mary that she protect and cover them and their families in her mantle.”

During Sunday Mass May 21 at Old St. Patrick Church in Chicago, Father Jack Wall, president of Catholic Extension, recognized the sisters for “having left behind their families and their country to come into a strange land to serve among the poorest of the poor.” He praised their “powerful witness to the power of God’s love.”

Father Wall said, “At Catholic Extension, we have come to know that you cannot go to the poorest places in the United States and not find the presence of the Catholic Church. And the face of ministry among the poorest of the poor so often is women religious. They are there with a profound joy in their hearts.”

Addressing the sisters directly, he said, “Sisters, Hermanas, we are so grateful for your walking together with us in hope. Your acceptance of this mission to come to this country has been a great blessing to us.”

At a meeting May 25, Sister Maria Teresa de Loera said the sisters participating in the U.S.-Latin American Sisters Exchange program see themselves as being on the frontlines of answering Pope Francis’ call to “go out to the peripheries of migration.”

A member of the Mexican order of Catholic Teachers of the Sacred Heart of Jesus who now works in the Diocese of Little Rock, Arkansas, Sister de Loera said, “We are listening to, suffering with, giving hope to, and sharing our lives with the immigrants. Our best contribution is our prophetic witness of unity and joy.”

She told Extension magazine that the 10-day encounter in Chicago was recharging them, saying, “It makes the Holy Spirit be reborn in us as women religious.”

Through Catholic Extension’s partnerships with U.S. Catholic universities, the sisters in the U.S.-Latin American Sisters Exchange Program several times a year receive extensive language, cultural, theological and pastoral training. At the end of the program, they will return to their Latin American congregations, which will in turn benefit from their increased skills and expertise.

Sister Brenda Hernandez Valdes is one of three Daughters of Mary Immaculate of Guadalupe from Mexico who work at St. Joseph Parish in Williston in the Diocese of Bismarck, North Dakota. She said that for her the program has been “a great opportunity in my life to grow in many ways — as a human person, spiritually and in my apostolic life. This Catholic Extension program has been a godsend not just for the people but also for us, for every sister in the program.”

As the parishioners in Williston grow in their faith, Sister Hernandez said, “we see the fruits in their lives. For me that is the best part of the experience.” Prior to the sisters’ arrival, the immigrant workers did not have anyone in the area’s parishes speak their language. “The Catholic Church had been losing people in North Dakota,” she said. “With our presence, we have been helping the church to save and to keep people.”

She explained that many of the workers in North Dakota’s oil fields around Williston arrive alone. “Some of them don’t have relatives or friends. Everybody needs family, and in our church, everybody is family, we are God’s family.”

During the sisters’ first year in Williston, Sister Hernandez said, the first Communion of 25 Hispanic kids also had a ripple effect: Some of their parents hadn’t been receiving Communion because they were not married. When their children asked them why they didn’t go to Communion, they decided to get married in the church. “We evangelized the kids,” Sister Hernandez said, “and then the kids evangelized their parents. It is awesome.”

Sister Maria Catalina Carrillo, who traveled from Mexico to represent Sister Hernandez’s religious order at the Chicago meeting, said, “So many congregations are here, but together we feel united as one church. The sisters in this program are the bridge between the Hispanic and Anglo cultures. They bring the two communities together.”

For many of the sisters, it also has been an eye-opening experience with respect to the realities of life for immigrants in the United States.

Sister Carrillo said, “In Mexico we think that the people who move from Mexico to the United States have an easy life, but they don’t. They have to face so many difficult things, and the sisters bring them joy through the church and make them feel welcome.”

Sister Marite Gutierrez, a Catechist Sister of Jesus Crucified working at Madonna del Sasso Parish in Salinas, California, said many of her parishioners are farmworkers who face many problems.

She cites the example of a young mother, who is struggling to make ends meet and lives with her two daughters in a small room in an apartment she is sharing with another family.

“I believe that is not what God wants for his children,” Sister Gutierrez said. “The first thing I can do for this mother is to be her friend, to listen and to reach out so that she and her children can feel God’s love and care for them. Faith can be a small window for light, for God to enter into their lives.”

This year has been more difficult for many of her parishioners. “They don’t know what is going to happen to them,” she said. Because of the widespread fear of deportation, “they don’t know if at the end of the day they will be able to return from their work. The children don’t know if their parents will be home when they come back from school.”

Sister Gutierrez added, “Immigrant people are our brothers and sisters, and as the church, we need to help them in whatever way we can. The first and most important thing is always to give hope.”