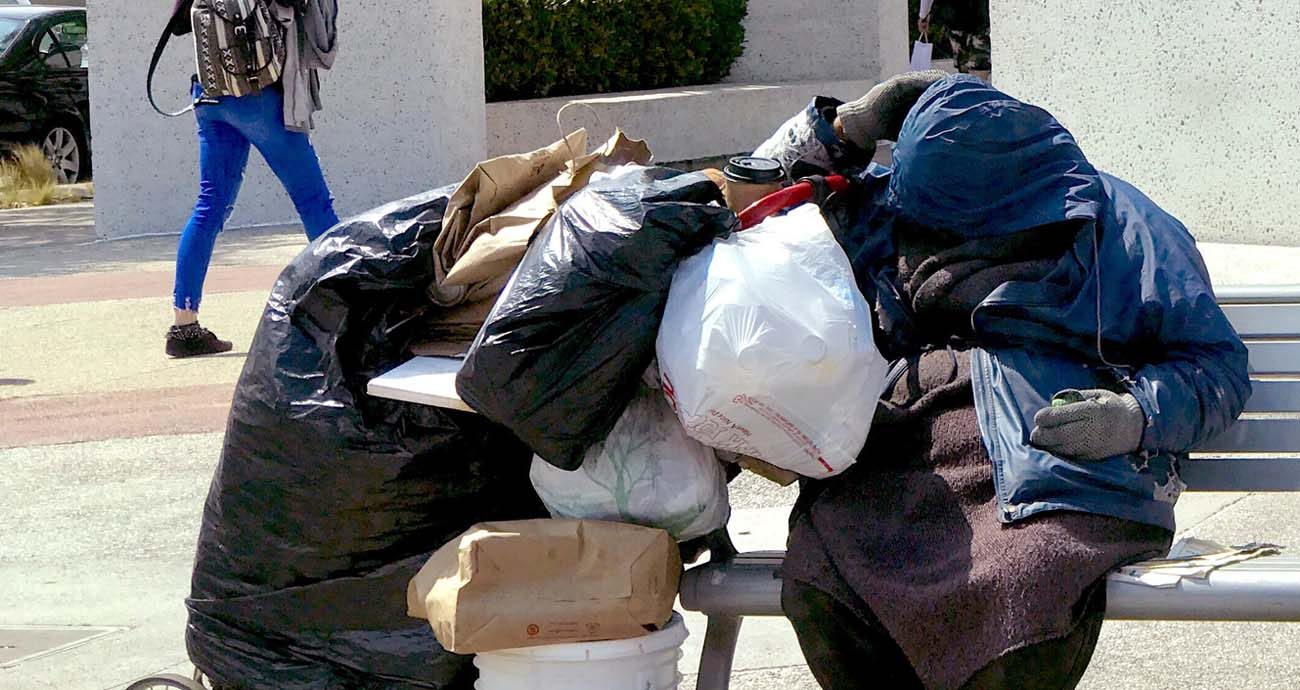 A homeless person sleeps on a bench in Santa Monica, Calif., May 10. (CNS photo/Mike Nelson, EPA)

LOS ANGELES (CNS) — As reaction swirled around President Donald Trump’s June 1 decision to withdraw the country from the Paris climate accord, Los Angeles received a report on “the dramatic increase in the numbers of our brothers and sisters who are homeless,” said Archbishop Jose H. Gomez.

“Each night in the county of Los Angeles — nearly 58,000 people have no place to call home,” the archbishop wrote June 6 in Angelus, the online news site of the Los Angeles Archdiocese.

“Personally, I am worried about the quality of life here in Los Angeles. Every day, it seems the distance grows wider between those who have what they need for a dignified life and those who do not,” he said, adding that the lack of affordable housing “is directly related to ‘the human ecology.'”

“Human life and human nature must be protected and cared for — our rights and dignity, the needs of our bodies, minds and spirit,” the archbishop said.

Trump’s action on the Paris accord “provoked deep concern everywhere about the future of the earth we live on,” Archbishop Gomez said. “Concern about global warming and climate change is real. The U.S. bishops have long supported the need for prudent action and dialogue about the impacts of climate change, especially as they affect the poorest and most vulnerable people.”

“But,” he added, “there remain sharp debates — scientific, technological, economic and political — about how severe the crisis is and how best to address the challenges created by carbon dioxide emissions.”

Archbishop Gomez noted that Pope Francis in his encyclical “Laudato Si'” strongly criticizes the “‘cap and trade’ policies used by states like California and also the federal government. The pope says buying and selling ‘carbon credits’ is ‘a ploy’ the wealthy use to pursue their economic self-interests and their habits of ‘excessive consumption.'”

He added: “Many authorities believe the world is already well on its way toward the goal of a global economy that will be far less dependent on carbon-generating energy sources.” Others point to progress in the areas of “green” jobs and the already-declining costs of renewable energy sources, he added.

“The natural environment must also be protected and cared for. We are not put here to consume what we need and throw away what we do not, with no regard for the health of our communities or the needs of future generations,” he said.

Like the debates over how to address climate change, opinions differ on the causes of homelessness and how best to respond, Archbishop Gomez said. Both issues require “prayer and thoughtful action,” he emphasized.

“The lack of affordable housing is directly related to ‘the human ecology,'” he said. “This is true in the poorest nations of the world, but sadly it is also true here in the wealthiest.”

“In many of our neighborhoods we now see makeshift ‘tent cities’ being established on sidewalks and boulevards and other public spaces,” Archbishop Gomez said of Los Angeles. “It is sad to see people living in these tents and all around them to see the signs — clothing, furniture, bikes and toys — that once these people had a home, but now they do not.”

He said he worries “we are getting accustomed to these sights in our city. We cannot allow ourselves to accept a Los Angeles where sidewalks become permanent residences for our neighbors.”

“The earth is our common home and everyone on earth deserves a place that he or she can call ‘my home,'” Archbishop Gomez said. “For me, the housing crisis is a reminder that in God’s creation, there is an ecology of the human person and an ecology of the natural environment.”

People cannot think about one of those issues without considering the other one, he said. “As God spoke and the universe was created, he breathed his Spirit of life into every person. God made this earth, not for its own sake, but to be a home for the human family.”

“Human life and human nature must be protected and cared for — our rights and dignity, the needs of our bodies, minds and spirit,” Archbishop Gomez said.