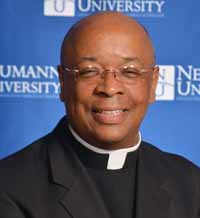 Father Stephen D. Thorne is pictured in this 2016 file photo.

WASHINGTON (CNS) — Delegates attending Congress XII of the National Black Catholic Congress in Orlando, Florida, in July will take on new responsibilities this time around.

Rather than working from a draft of a pastoral plan developed prior to the congress as per tradition, the 2,000 attendees will be tasked with developing a pastoral plan during the July 6-9 gathering and taking it home to their parishes and dioceses.

“We’re interested in what the people have to say, what’s in their hearts. It’s what they want to see addressed (by the Catholic Church),” said Father Stephen D. Thorne, pastor of St. Martin de Porres Parish in Philadelphia and a congress leader.

“In the end, what is finally approved, we hope to see it reflected in the pastoral plan of the local bishop,” he told Catholic News Service. “Whatever the goals are — an African-American Catholic saint, or Catholic education and Catholic schools being viable in our communities and supporting them, or the violence of young people — can be included.

“It’s a real act of faith, an act of the Spirit, to come together kind of like in conclave, (and) have the people say what is in our hearts.”

The congress immediately follows the “Convocation of Catholic Leaders: The Joy of the Gospel in America.” Some congress participants are expected to be at both events.

Individuals in 50 dioceses have been discussing ideas for the pastoral plan in preparation for the congress, which is convened every five years. This year’s congress is the 12th. The theme is taken from the Gospel of Luke 4:18 and the Book of Micah 6:8: “The Spirit of the Lord is upon me: Act justly, love goodness and walk humbly with your God.”

Father Thorne said the theme is meant to inspire how African-American Catholics “respond to the challenges we face in our world and our church.” From racism and the rise of white nationalism to youth violence, black Catholics are called to respond with love, understanding and resolve, he said.

The program for the congress includes daily plenary speakers and workshops focused on topics such as wisdom from black Catholic history; a discussion on the implementation of the U.S. Conference of Catholic Bishops’ anticipated pastoral letter on racism; the Eucharist; domestic violence; prison ministry; and serving the spiritual needs of urban youth in a secularized society.

Cardinal Peter Turkson, prefect of the Vatican’s Dicastery for Promoting Integral Human Development, is scheduled to address the opening session of the congress July 7. He also is to celebrate Mass for the delegates.

Liturgy, prayer and retreats also are on the daily agenda.

A particular focus will be on meeting the needs of young people, added Father Thorne, who has attended the congress since 1987, starting as an 18-year-old.

“We realized we have work to do especially to engage our young adults,” he explained. “If we don’t listen to them and their concerns, we’re not going to have another congress.”

Just as important, Father Thorne said, is the response of African-American Catholics to the rising tide of racism and polarized politics across the country.

The priest recalled Pope Francis’ visit to Philadelphia and his public comments that encouraged people to bring justice and mercy to a world wrought with violence and division. He said the pope’s apostolic exhortation “Evangelii Gaudium” (“The Joy of the Gospel”) can be particularly inspiring to carry on the necessary work.

“It’s unique times politically,” he said. “How do we live our faith in the public square? How do we create community in that challenged world? We cannot act for justice, love tenderly, without the Lord,” he said.

“That’s a message we can share to the wider community … and offer an alternative to the discourse in our country.”

Father Thorne said he expects the role of African-American, Latino and Asian Catholics in church life will continue to grow in the future. He said faith and better understanding of the Gospel call for justice in the face of racism and violence will guide the evolving church.

“Black Catholics have been through challenging times before. We are called to be men and women of resilience,” he said.

“Our diversity is one of the gifts we can offer. It reminds us that the church is truly catholic, universal,” he added.

The congress can help inspire the work ahead, Father Thorne said.

“We’re committed to being the leaven and beacon of hope. Eucharist every Sunday gives us the strength we need to go out for the work of justice.”

NEXT: James Comey makes appearance with his father at New Jersey parish