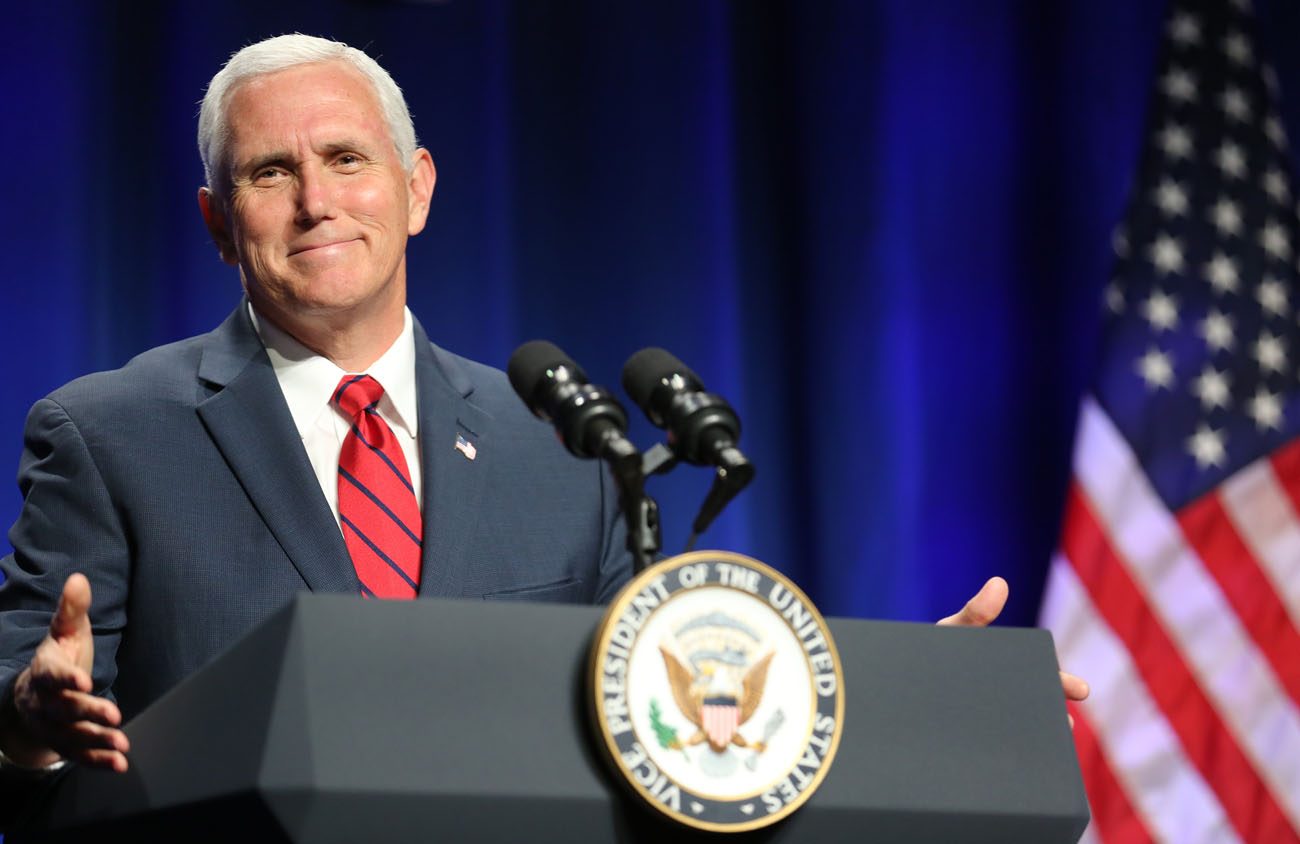 WASHINGTON (CNS) — Vice President Mike Pence and other speakers addressed securing religious liberty and protecting the sanctity of human life both in the United States and worldwide, particularly in the Middle East, at the 13th annual National Catholic Prayer Breakfast in Washington June 6.

Pence spoke about President Donald Trump’s commitment to the securing of all religious freedoms to over 1,200 attendees, following speeches by keynote speaker Archbishop Timothy P. Broglio, head of the U.S. Archdiocese for the Military Services, and special guest Mother Olga of the Sacred Heart.

Pence expressed his sorrow over the recent terrorist attacks in Europe, reassuring those in attendance that the president is committed to ending attacks on religious liberty around the world, as well as in America.

“Catholicism has made an indelible mark on the American spirit,” Pence said. “Your faith has moved mountains and the Catholic Church, and its millions of parishioners have been a force for good in our communities large and small throughout our land throughout our history. All the great American Catholics gathered here, let me assure you this morning, bright and early, at this prayer breakfast: American Catholics have an ally in President Donald Trump.”

The vice president, an evangelical, shared fond memories of growing up in a Catholic family, saying that he was honored to speak at the breakfast and that his mother would be proud.

“This honestly feels like coming home to me,” Pence said.

Since 2004, Catholics have gathered in the nation’s capital to come together to pray for the country and hear from religious and political leaders. The founding board, with leaders such as former U.S. Sen. Rick Santorum, R-Pennsylvania, intended to answer to St. John Paul II’s call to new evangelization for all Catholics.

Carl Anderson, supreme knight of the Knights of Columbus, spoke of the common ground that the Vatican and the president found in Trump’s recent meeting, particularly in their dedication to pro-life and religious freedom issues, as well as the protection of Christians in the Middle East.

Anderson introduced Pence by recalling what Pence said while speaking at the March for Life in Washington back in January.  “Let this movement be known for love, not anger, for compassion, not confrontation,” Pence said at the March for Life. “To heal our land and restore a culture of life we must continue to be a movement that embraces all and cares for all out of respect for the dignity and worth of every person.”

Auxiliary Bishop Mario E. Dorsonville of Washington opened the breakfast calling for solidarity in prayer for the Christians in the Middle East, after he read a special note from Cardinal Donald W. Wuerl of Washington, who was unable to attend.

“Let us also be mindful of so many of our brothers and sisters around the world who continue to face persecution and suffering on account of their faith,” Bishop Dorsonville read from Cardinal Wuerl’s message. “As our Holy Father, Pope Francis, ‘We must not resign ourselves to thinking of a Middle East without Christians who for 2,000 years have confessed the name of Jesus and have been fully integrated as citizens into the social cultural and religious life of the nations to which they belong.'”

Archbishop Broglio was the keynote speaker at the breakfast. Recalling the spirit of service displayed by so many men and women gone before us, he told the story of a military chaplain, Father Joseph Lafleur of Louisiana, who gave his life while saving others on a prison ship.

“If we were to survey the history of the church, and look at the lives of the saints, we would discover men and women who built on their virtues, to reflect the authenticity of their faith. The same thing has an impact on the nation,” Archbishop Broglio said. “To quote a respected cardinal, ‘A good Catholic is a good American because the practice of virtue also leads to good citizenship and there is no dichotomy between faith and life if we cultivate and practice virtue.’ Each of us has the potential to rebuild our society and our world if we cultivate authentic virtue.”

He went on to call Catholics to return to lives of virtue, both acting rightly and giving of themselves to others.

“We build for a new tomorrow when we draw from that wellspring of virtue,” Archbishop Broglio said.

Born and raised in Iraq, Mother Olga’s love for America led to her becoming an American citizen.

“Here in America we take pride in our democracy,” Mother Olga said. “The true democracy and the strength of our democracy should not only be seen as an expression of the political minds of the people, but also in our embrace of our own identity as Americans and appreciation of the religious roots of our foundation of a nation.”

She said that it is out of love that she is committed to the United States and those who serve the country.

“May our gathering today as people who love God and this country be a renewed commitment to renew the spirit of cooperation which has accomplished so much good through the history of our nation,” Mother Olga said. “May the fruit of today’s prayer for our nation be a grace for our people to experience a new birth of freedom, freedom planted with faith, grounded in hope, nourished by love in the soil of truth.”