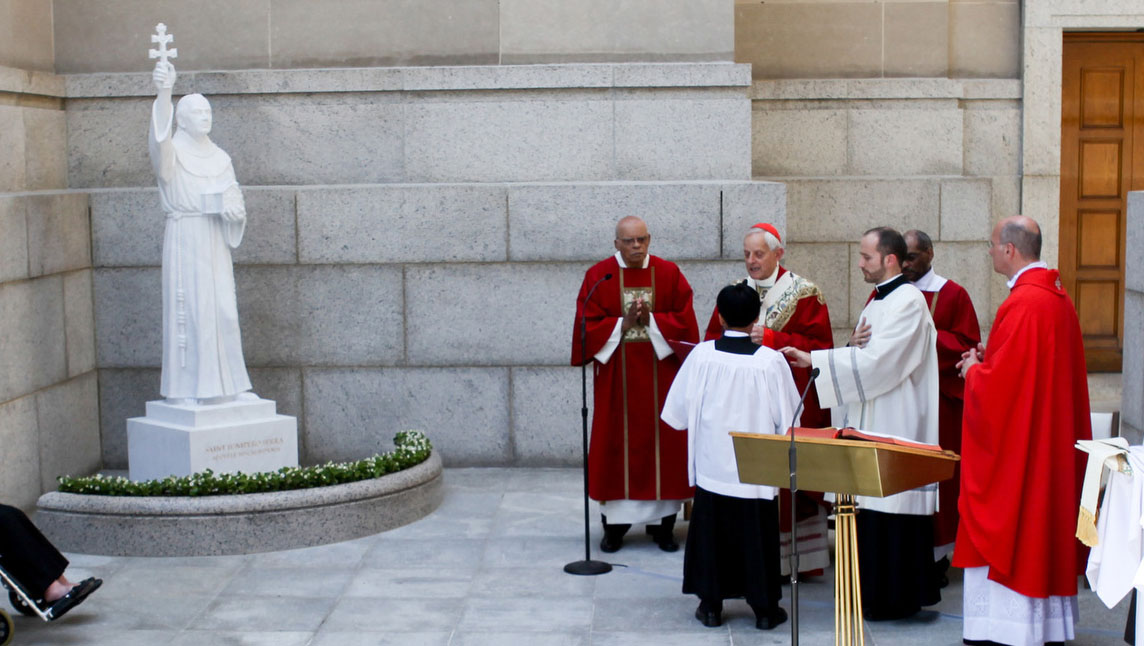 Cardinal Donald W. Wuerl of Washington blesses a new statue of St. Junipero Serra at the Basilica of the National Shrine of the Immaculate Conception in Washington June 4. The statue is located immediately next to the spot where Pope Francis canonized the saint during the pontiff's 2015 visit. (CNS photo/Brian Searby, Catholic Standard)

WASHINGTON (CNS) — Washington Cardinal Donald W. Wuerl blessed a new statue of St. Junipero Serra June 4, calling him “an example of the power and grace of God at work.”

The blessing came on the feast of Pentecost, the day that the Catholic Church celebrates the outpouring of the Holy Spirit upon the apostles.

The new statue is located on the east side of the Basilica of the National Shrine of the Immaculate Conception in Washington, immediately next to the spot where Pope Francis canonized the saint during the pontiff’s 2015 visit to Washington.

Preceding the dedication of the statue, Cardinal Wuerl celebrated a noon Pentecost Mass at the basilica. Msgr. Walter Rossi, rector of the basilica, noted that directly above the altar where the Mass was celebrated is a dome with a mosaic depicting the Holy Spirit descending upon the apostles, Mary and every corner of the world.

In his homily, Cardinal Wuerl said it is this gift of the Holy Spirit that allowed Jesus’ apostles to answer His call to be His witnesses in the world.

“Those men once described as timid and fearful, gathered in a room with the door closed, are now anointed in an outpouring of the Holy Spirit,” said the cardinal. “They become bold; they take on the challenge of renewing the face of the earth.”

That same spirit that empowered the apostles is also “alive in each one of us,” the cardinal noted, and “each one of us has shared our own personal Pentecost in the saving waters of Baptism.”

By looking to the history of the Catholic Church, it is possible to see the Holy Spirit at work in many individuals, including St. Junipero Serra, the cardinal said.

The saint, who was canonized by Pope Francis Sept. 23, 2015, on the east steps of the national shrine, is known for spreading the Gospel in the New World during the 18th century. The Franciscan priest landed in Mexico, then made his way on foot up the coast of Mexico and to California, where he established missions that are now the names of well-known cities such as San Diego, San Francisco and Santa Barbara.

“Traveling along the coastal highway and reading the name signs for the towns and cities that grew out of those missions reads like a litany of the saints, but it is actually a road map,” the cardinal said.

It is estimated that during his ministry, St. Junipero Serra baptized about 6,000 native people.

“Today, in the context of this celebration of Pentecost … we will bless a statue to commemorate St. Junipero Serra as a reminder to all who pass through this basilica of the power of the Spirit, the challenge of missionary discipleship and the witness of human holiness,” said the cardinal.

Noting that the saint’s motto was “siempre adelante,” which means “always forward,” the cardinal said, “May we feel in our heart the same excitement for the Gospel, the same power for the Spirit, the same zeal for souls that calls us to move ‘siempre adelante,’ always forward in the Lord, knowing that if we ask, God will send His Spirit.”

Following the Mass, the cardinal processed out the east side of the shrine, followed by the concelebrating priests, choir, and congregation, to the site of the new statue of St. Junipero Serra, which was funded through the generosity of Tim and Steph Busch, who also founded a high school in San Juan Capistrano, California, which they named “JSerra Catholic High School.”

Tim Busch attended St. Junipero Serra’s canonization along with about 200 students from the school, and said he thinks the saint is a “good witness to young people that real people now are saints, not just thousands of years ago.”

Busch, who is from California, frequently attends Mass in the chapel of a basilica that St. Junipero Serra founded and once celebrated Mass in. He said he wanted to be involved with making the new statue possible, because for people on the East Coast, “it is not a saint that they are familiar with.”

The statue depicts the saint in his Franciscan robes, holding a crucifix on one hand and a church in another. It was sculpted by Italian artist Franco Cervetti, under the artistic design of Rambusch Decorating Co.

Following readings from the book of Isaiah and the Gospel of John, those gathered prayed for the intercession of St. Junipero Serra. Then, the cardinal blessed the statue, sprinkled it with holy water, and incensed the statue.

The church blesses a statue, the cardinal said, because “when we look at the representation of those who have followed Christ faithfully, we will be motivated to seek the kingdom of God that is to come” and we will be mindful of the saints, remembering “how they love us, are near us, intercede ceaselessly for us, and are joined to us in marvelous communion.”

NEXT: ‘Pray for boldness,’ archbishop implores faithful at Pentecost vigil