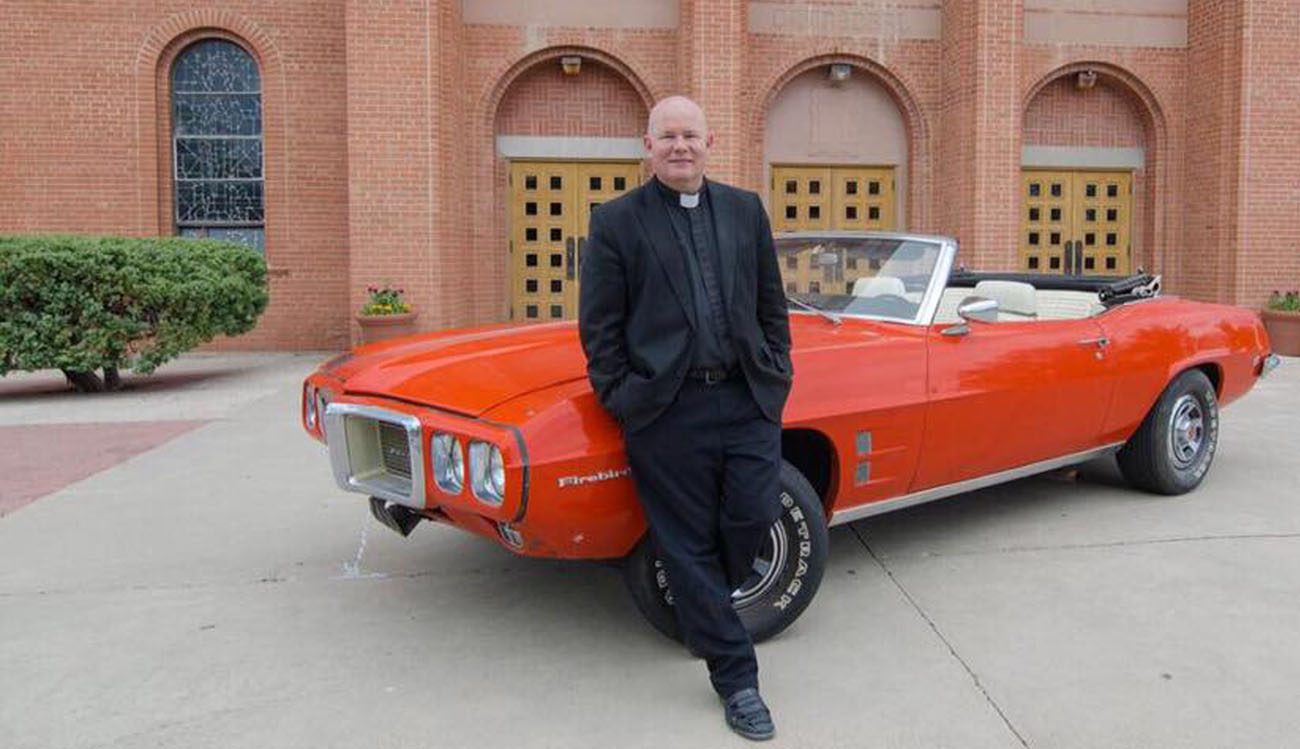 Father Matthew Keller, rector of Sacred Heart Cathedral in Gallup, N.M., poses June 8 with a 1969 Pontiac Firebird Convertible that he refurbished for a raffle in support of vocations for the Diocese of Gallup. (CNS photo/V8 for Vocations)

WASHINGTON (CNS) — A priest who loves rebuilding hot rods and assisting seminarians is donating a 1969 Pontiac Firebird Convertible that he refurbished for a raffle in support of vocations for the Diocese of Gallup in New Mexico.

This is not the first time that Father Matthew Keller remodeled a hot rod. Last year, he fixed up a donated 1972 Chevelle and raised $140,000 for seminarians.

The money helped five seminarians start their journey to becoming priests for the Diocese of Gallup.

“Gallup is a really wonderful and unique diocese,” Father Keller said in a phone interview with Catholic News Service. “We have about 35 to 40 priests and 65 parishes plus our missions.”

Father Keller mentioned that few priests there have only one parish to serve. Gallup is the poorest diocese in the country and is in dire need of more seminarians.

As the former vocations director for the diocese, Father Keller knows that any financial support is necessary for those interested in the seminary. In many cases, it can cost up to $30,000 for each seminarian to study for the priesthood.

The raffle of the Pontiac is set for June 17, and the nonprofit group www.V8forVocations.org is handling online sales of the tickets, which are $25 each.

In addition to being the rector at Sacred Heart Cathedral, Father Keller also is vicar general for the Diocese of Gallup.

His passion for vehicles began early on.

After he entered the seminary, he sold his 1964 Chevy Malibu SS, leaving his love for cars aside. However, his excitement for hot rods did not stray far.

“One of my friends, who knew I was into cars, we were talking and I was saying I was missing working on cars, he said, ‘You should get a car to work on with the seminarians and use it as a human formation project,'” Father Keller said. “He was thinking of a personal car for me or the vocations office to use. I thought about this and thought it was a great idea for a fundraiser.”

Father Keller decided to find a vehicle and eventually the 1972 Chevelle was donated to him for the project. In his position, he constantly was working on human formation projects and used this as a way for the seminarians to get closer to each other.

After introducing the idea to other people, he began to refurbish the hot rod. It took him and a group of 20 core workers two years to finish the redesign of the vehicle. After the raffle, he decided to continue the fundraiser by raffling another vehicle.

“Before we were even done with the Chevelle, a second opportunity came along,” Father Keller said.

The opportunity was the chance to purchase the 1969 Pontiac Firebird. Father Keller bought the car in Albuquerque, New Mexico, from a man who was given the car after the death of his father.

“This car only has 79,000 original miles on it,” Father Keller said. “We pulled the drivetrain out, but the engine did not need to be rebuilt.”

Father Keller did not complete the project by himself.

“We had eight or 10 people who were really core” to the project, Father Keller told CNS. “Probably 30 people or more have done something on it.”

He asked for help from the Knights of Columbus throughout New Mexico for assistance with the panels on the vehicle. Also, Rico Motors in Gallup is giving the car a new paint job.

Even though Father Keller had several hands assisting on the Firebird, it still took more than a year to complete.

“It is kind of crazy to do a rebuild in less than a year,” Father Keller said. “This Firebird project took just over a year.”

In addition to helping seminarians, the project also helped grow the community and offered a chance for evangelization.

“One of the surprise elements of the project was how it turned into a community bonding,” Father Keller said. “There was an opportunity for evangelization.”

Father Keller talked about a group of men who weren’t Catholic and how the experience helped them open up to faith. Many people took advantage of the time spent working on the hot rod by having their confession heard in the garage.

After the raffle, the next project for Father Keller is focused on refurbishing a 1966 Mustang Convertible.

The June 17 raffle of the 1969 Pontiac Firebird Convertible will take place at the Sacred Heart Cathedral family center in Gallup during the parish fiesta. The winner does not need to pay taxes because it will be covered by V8 for Vocations. Participants do not need to be present to win.

Those interested in purchasing a raffle ticket for $25 each or learning more about the organization can visit www.V8forVocations.org.

PREVIOUS: Christ seeks the 1 lost sheep; evangelizer seeks the other 99