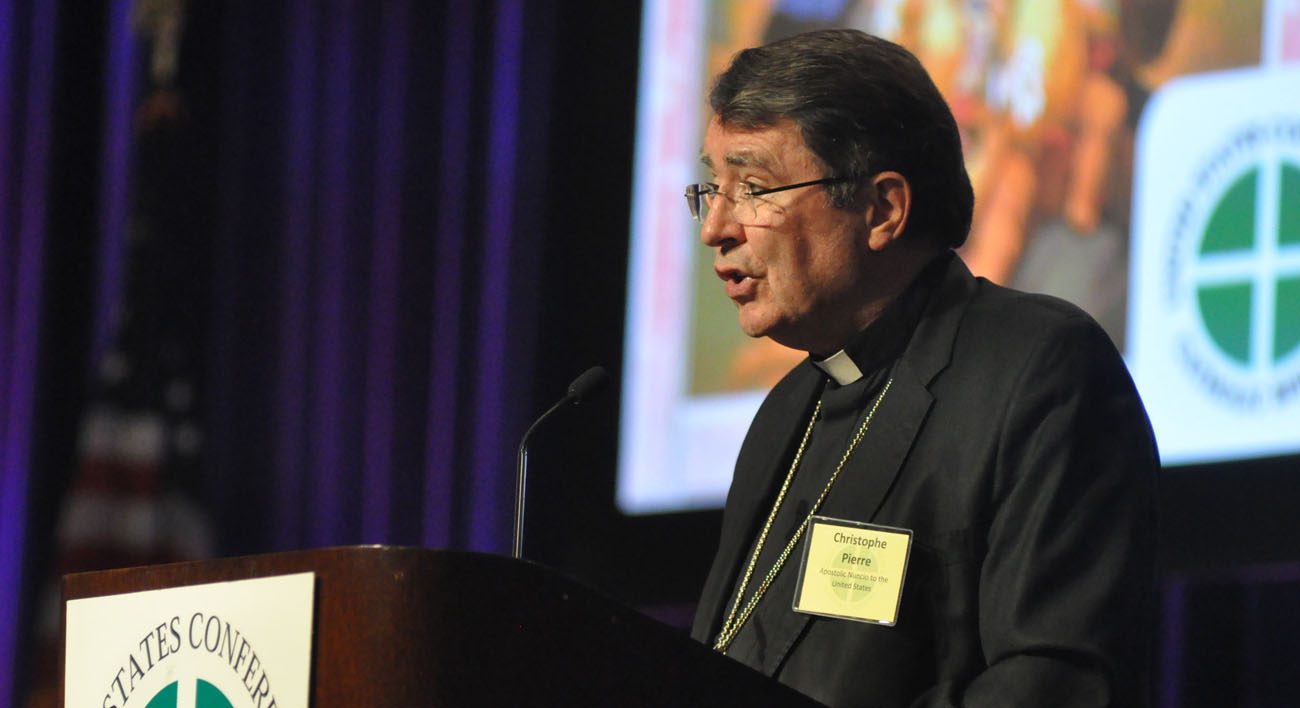 INDIANAPOLIS (CNS) — Archbishop Christophe Pierre, apostolic nuncio to the U.S., called the U.S. Catholic bishops to be missionary disciples through listening and fostering solidarity and a culture of encounter.

He encouraged the U.S. bishops to view current challenges as “a time of grace.”

The archbishop, who was appointed nuncio a year ago, told the bishops June 14 at the start of their spring meeting in Indianapolis that in his travels throughout the country this year, he was impressed by the faith of Catholics and their dedication to their parishes “despite the many challenges they face in living the faith in an increasingly secular culture that values efficiency and productivity over spiritual values.”

In speaking about missionary discipleship, Archbishop Pierre recalled his presence as apostolic nuncio to Mexico at a meeting 10 years ago of the Latin American bishops’ council that took place in Aparecida, Brazil.

He said that the final document of that meeting, which addressed evangelization in a secularizing culture, was “a source of life for my mission and for the whole church in Latin America,” and was adopted by Pope Francis in his 2013 apostolic exhortation “Evangelii Gaudium” (“The Joy of the Gospel”).

“I know that many of you, along with your people, have already adopted this missionary attitude, remembering, of course, that we are first disciples, called to deeper communion with the Master,” Archbishop Pierre said. “In this year, I have seen the fruits of your labors in the defense of human life, conscience and religious liberty, in your genuine concern for refugees and migrants, both here and throughout the world, as well as your zeal for families and your work for adequate access to health care.”

“Do we listen — even to those with whom we disagree — so that we might propose the essentials of the Gospel in a more persuasive, life-changing way?” Archbishop Pierre asked. “It is important to listen to the laity, who have a particular expertise, real faith and devotion, to the clergy and religious, and to one another as bishops, acting in a collegial and synodal way, to produce the best pastoral response to the challenges of our times.”

With the 2018 meeting of the Synod of Bishops on the topic of youth, faith and vocational discernment in mind, Archbishop Pierre emphasized “listening to and appreciating the perspectives of young people — who find themselves at the periphery of the church.”

Archbishop Pierre went on to exhort the bishops to promote a “culture of encounter.”

“The need to foster, especially among our people, a culture of encounter and a willingness to meet those from other cultures, countries, and faiths, as a way of promoting peace and understanding, could not be greater,” he said. “Accepting this challenge means fostering and embracing the virtue of solidarity. Solidarity, born from an encounter, can push humanity to search for true justice without forgetting the least of our brothers and sisters.”

At the same time, Archbishop Pierre noted that encouraging solidarity “should be distinguished from the uniformity imposed upon peoples and nations under the guise of unity.”

“Part of the church’s mission involves bringing unity and peace to the world and defending peoples against an ideological colonization,” he said.

Archbishop Pierre recognized the difficulty in promoting missionary discipleship in this way, but encouraged the bishops to do so nonetheless, reminding them that it is all done only in Christ.

In a news conference following the first session of the meeting, Cardinal Daniel N. DiNardo of Galveston-Houston, president of the U.S. Conference of Catholic Bishops, said he was particularly impressed by Archbishop Pierre’s reflections on “solidarity with the varieties of peoples who are on the edges, or even at the center, (of society) and who are part and parcel of the family of humankind that the church embraces.”

“He approached the bishops, it seems to me, in some ways, by encountering us, consoling us, counseling us,” Cardinal DiNardo said. “On the other hand, he challenged us. And the challenging issue was solidarity. I though he was very engaging.”

Gallagher is a reporter at The Criterion, newspaper of the Archdiocese of Indianapolis. Carol Zimmermann in Washington contributed to this story.

NEXT: Gregory: Bishops ‘can never say we are sorry enough’ for tragedy of abuse