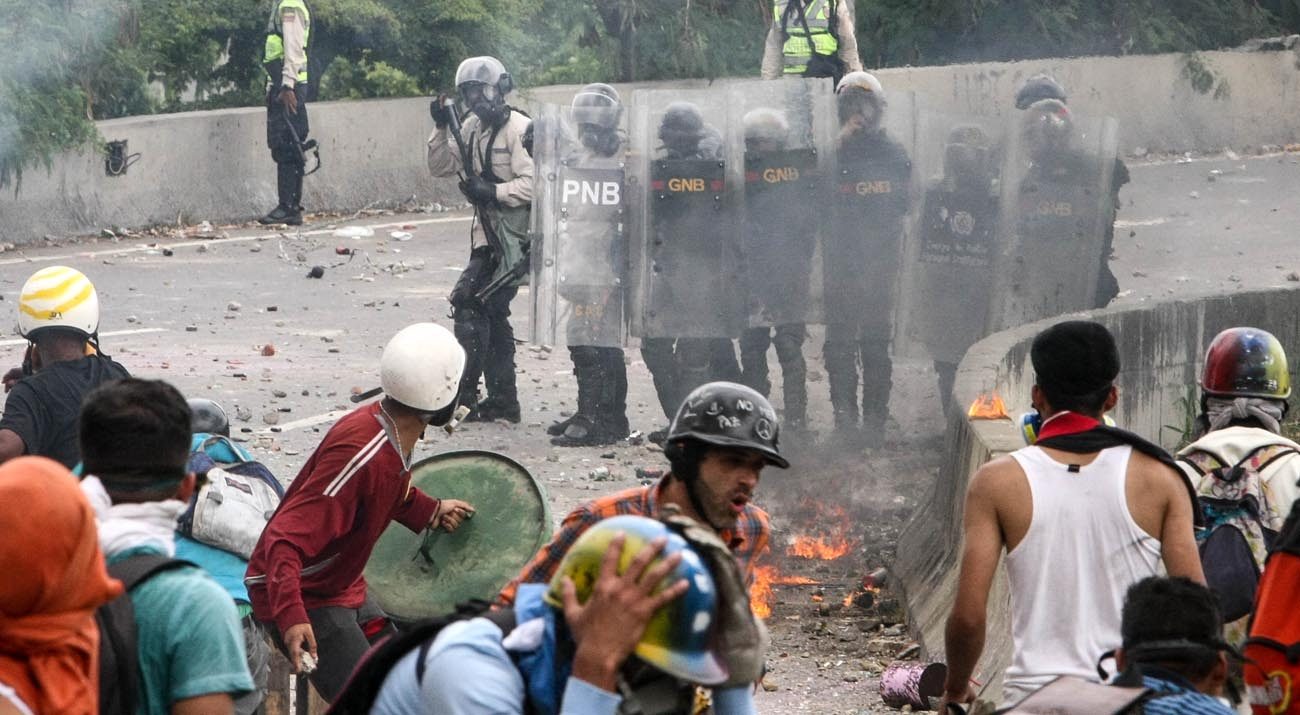 Protesters clash with police June 5 in Caracas, Venezuela. With Venezuela's political and economic crisis turning violent and after the country's president tried to claim he had the support of Pope Francis, the leadership of the country's bishops' conference traveled to the Vatican. (CNS photo/Cristian Hernandez, EPA)

UPDATED – VATICAN CITY (CNS) — After meeting Pope Francis and seeing how moved he was by their description of the crisis gripping Venezuela, the leaders of the country’s bishops’ conference said they hoped the pope would help draw the world’s attention to the suffering of their people.

“The pope was truly moved by the situation and well informed about everything,” said Archbishop Diego Padron Sanchez of Cumana, conference president.

Briefing reporters June 8 after meeting the pope, the archbishop said the bishops hope the pope will speak out about the situation “so the world will know its gravity.”

The bishops requested the meeting as the country’s political and economic crisis became increasingly violent and after the country’s president tried to claim he had the support of Pope Francis.

“There is no distance between the episcopal conference and the Holy See,” Archbishop Padron said.

The bishops gave Pope Francis a dossier on the nearly 70 people — both government supporters and backers of the opposition — who have been killed in anti-government protests since April.

They also shared with the pope a report compiled by Caritas Venezuela illustrating the dire situation many Venezuelans are facing because of exploding inflation and a lack of food and medicine.

The Vatican listed the meeting in its daily bulletin but provided no information.

On the eve of their meeting with the pope, Cardinal Jorge Urosa Savino of Caracas told Vatican Radio that “the repression” exercised by the government of President Nicolas Maduro “has been increasingly cruel.”

In addition to official security forces, he said, there are pro-government, armed civilian groups, “which is absolutely criminal, so that the situation is extremely serious and that is why we are here.”

Pope Francis, he said, not only has urged prayers for the country publicly, but also has urged dialogue and a negotiated settlement to the political crisis and has encouraged Maduro’s government to allow in food and medicine.

Pope Francis had asked Archbishop Claudio Maria Celli, who was a Vatican diplomat before becoming president of the then-Pontifical Council for Social Communications, to serve as a Vatican facilitator to support the mediation attempted by the Union of South American Nations. The efforts led to two meetings — in October and November — of representatives of the government and of 17 opposition parties. A third meeting, originally scheduled for December, repeatedly has been postponed.

Before the scheduled December meeting, Cardinal Pietro Parolin, Vatican secretary of state, wrote a letter to all parties involved expressing concern that the negotiations were not being taken seriously.

Cardinal Parolin outlined several steps that the Vatican believed were urgent: solving “the severe crisis in the supply of food and medicines affecting the people”; reaching an agreement on a timetable for elections; restoring the authority of the country’s parliament, which was disbanded by Maduro’s Supreme Court; and releasing political prisoners.

“These are very serious problems that the government has not resolved and that is precisely why people are demonstrating in the streets and have been repressed with a cruelty that is really unusual and unnecessary,” Cardinal Urosa told Vatican Radio.

Instead of restoring the parliament, Maduro has suggested convoking a constitutional assembly to rewrite the constitution. The bishops’ conference has opposed the move, which led Maduro in early May to claim that the bishops were not listening to Pope Francis’ wishes for a negotiated settlement to the crisis.

The Maduro government’s idea for a constitutional assembly, Cardinal Urosa said, is an attempt to impose “a minority that currently supports it over the majority of the population that is rejecting it.”

The bishops came to the Vatican to meet Pope Francis, the cardinal said, “to seek the voice of the pastor and to help the Venezuelan people solve the grave situation they are currently living.”