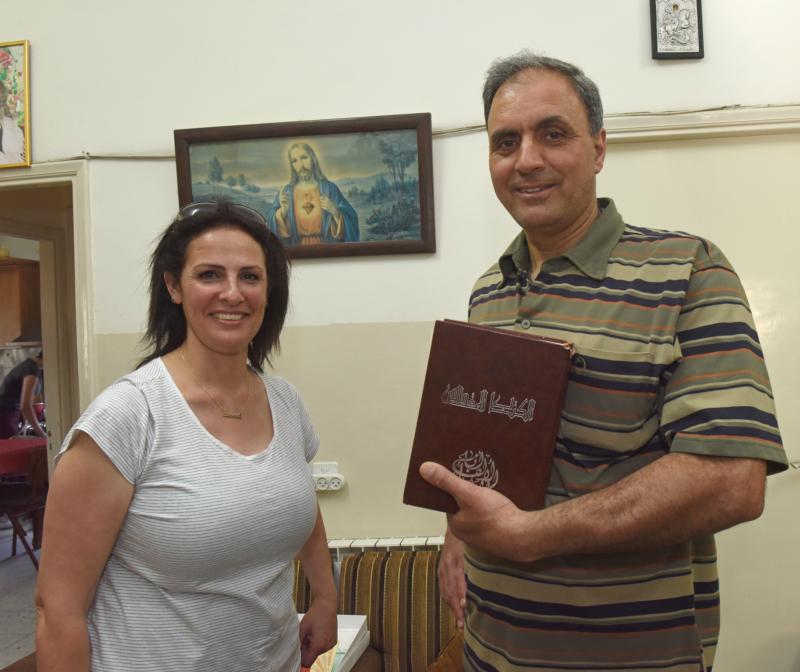 Suad and Charlie Kattan pose while holding a Bible in their home June 5 in Beit Jala, West Bank. The couple won the Adult Bible Contest of the Holy Land May 20. (CNS photo/Debbie Hill)

BEIT JALA, West Bank (CNS) — It was the question about the Old Testament prophetess Abigail that clinched the first Adult Bible Contest of the Holy Land for Beit Jala Catholic husband-and-wife team Suad and Charlie Kattan.

It was a vindication of sorts for Suad, 48, who came to admire Abigail over the three months the couple studied for the contest, which occurred during a three-month period in Nazareth, with the finals at the end of May.

“It is very interesting as Christians to know about the Bible. It is something we need. We only know the New Testament and we don’t know the Old Testament,” said Suad, a teacher at Talitha Kumi Evangelical Lutheran School. “I learned many things about the Old Testament especially about when David went to Mount Tabor and met Abigail. It is a lovely story I didn’t know about. It shows the wisdom of a woman; how she used her brain to prevent people from dying.”

Suad also was moved by the story of Daniel and his ability to interpret dreams for the Babylonian king and the story of the prophet Samuel, who came to Bethlehem to select David the young shepherd to be the new King of Israel, both of which she had not fully known before.

Studying for the contest while living in the land where the Bible took place afforded the couple the unique possibility of connecting the stories to sites where they took place. They also were excited to be able to see some of the Christian holy sites in the Galilee for the first time.

Reading from the Old Testament also made them aware of many of the similar traditions among the peoples of the area, the couple said.

Learning together also helped them become closer to the roots of their Christian faith and closer as a family as their five children — ranging in ages from 25 to 17 — came around to hear what their parents were studying and sometimes took part in the discussions, Suad said. It also helped solidify the importance of cooperating together as a couple.

Suad, whose mother always read the Bible before going to sleep, liked to read late into the night or act out with her abounding energy the sections she was studying at the kitchen table to the amusement of her children, while Charlie, 54, a teacher at the Beit Jala Latin parish school, preferred to read in quiet during his breaks at school.

The couple often would consult with each other and discuss the sections they had read.

In addition to reading from the Bible, they reviewed a thick study guide that was sent to all 16 teams participating in the contest. The Kattans were the only contestants from the West Bank, and though the special travel permits they received during Easter were still valid, they faced security and checkpoints every time they traveled from their home to Nazareth.

“It is not easy when Palestinians want to travel,” Suad said.

The contestants were quizzed on biblical history, archaeology and interpretation of Scripture.

As the winners of the contest, they will travel to the Vatican and Istanbul, where they will meet with Pope Francis and Ecumenical Patriarch Bartholomew, the spiritual head of the Eastern Orthodox churches.

The Bible Contest is an ecumenical initiative of both the Orthodox and Latin Catholic churches with the goal of stimulating the reading and understanding of the Bible in order to develop a “sprit of love and brotherhood among religions,” contest organizers said.